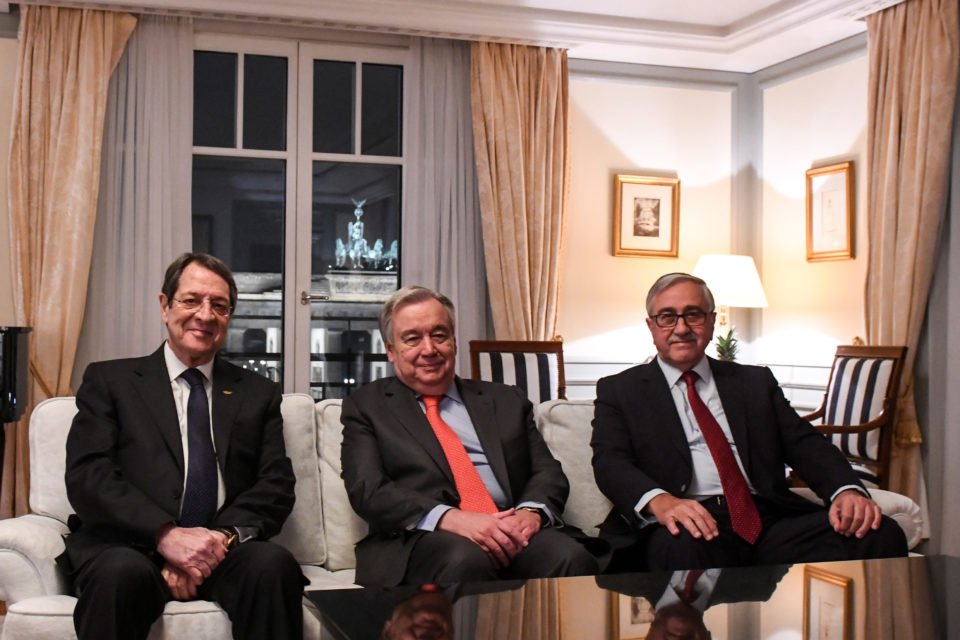 UN Secretary-General (UNSG) Antonio Guterres said that though he continues to hope that a comprehensive settlement in Cyprus is possible, the Covid-19 pandemic has added to an already complex situation on and around the island.

In his latest report on his good offices mission released on Wednesday evening US time as an official document, Guterres said that rising tensions in and along the buffer zone, concerns over irregular migration and the flow of refugees both on the island and in the region have strained relations among the parties to the Cyprus issue. Other sources of tension concern the possible opening of Varosha, hydrocarbons exploration and, increasingly, maritime boundary delimitation.

“I urge all relevant parties to renew dialogue and explore possibilities for regional cooperation, and I call for serious efforts to be taken to defuse tensions,” he said.

On the issue of natural resources in and around Cyprus, he said they should be a strong incentive to reach a mutually acceptable settlement to the Cyprus problem without any further delay.

The report also includes the notes by the two leaders on their efforts to support efforts to reach a sustainable and comprehensive settlement.

Guterres said that three years have passed since the intensive talks at Crans-Montana, “making it more challenging to resume negotiations”, but he would continue  to monitor developments closely and urge all parties to exercise restraint and avoid escalation.

Referring to his meeting in Berlin last November with the two leaders, he said he would continue his efforts to achieve terms of reference to serve as a consensus starting point for phased, meaningful and results-oriented negotiations at the earliest feasible opportunity.

“I committed to explore with the Turkish Cypriot leader and the Greek Cypriot leader and with the guarantor powers the possibility of convening an informal five-plus-United Nations meeting at an appropriate stage. I underscore the point that this time must be different,” he said.

With regard to the question of Varosha, he reiterated that the position of the UN remains unchanged and that it continues to be guided by the relevant Security Council resolutions and is available to assist in the implementation of any measures that are consistent with those resolutions.

The UNSG pointed that beyond the important regional dimension of the Cyprus issue, much remains in the hands of Cypriots themselves.

“Redoubled efforts are required to re-engage Cypriots, bridge the divide between them and address societal scepticism and disengagement.”

Guterres also refers to poll results arguing that despite the general mood of disengagement and scepticism on both sides, the results indicate that the two communities continue to feel that increased cooperation between them on a series of issues could bring them closer.

In a recent poll carried out on behalf of his mission of good offices, he said, the majority of respondents from both communities stated that the resolution of the Cyprus issue was of the highest importance or of high importance to them.

While both communities considered that the other community placed somewhat lower significance on reaching a solution, both had more positive expectations of a settlement scenario than of the status quo.

But as the poll was carried out pre-pandemic, he said, “it remains to be seen whether continued separation and restrictions on movement through the crossings, as well as the broader fallout of the Covid-19 crisis, affect these views.”

Guterres called on influential actors in the political, economic, religious, artistic and other spheres to contribute to bringing the communities together.

“Acts that are aimed at provoking the other community or inciting hatred must be addressed and denounced by political and other leaders on both sides of the island,” he said.

Guterres also said that joint appearances of the two leaders have taken place only sporadically over the past three years, but such moves carry particular significance, “especially considering the overall decline in the political climate on and around the island”.

He reiterated that despite the critical importance of confidence-building measures (CBMs) and other forms of cooperation between the communities, including the work of the technical committees, this cannot replace a viable and comprehensive negotiation process to reach a peaceful settlement in Cyprus.

“I echo the call by the Security Council to the sides and all involved participants to renew their political will and commitment to a settlement under United Nations auspices,” he said.

“I look forward to renewed dialogue on the Cyprus issue and urge the parties to find a path towards a comprehensive settlement as soon as possible.”

On the coronavirus outlook, Guterres commended both sides for their efforts and their diligence, pointing out that the number of overall Covid-19 cases in Cyprus so far is among the lowest in Europe.

He welcomed the fact that restrictive measures are being lifted on the island in the light of the encouraging epidemiological situation but noted it was “essential that movement within the island be allowed along with incoming travel”.

“I encourage the leaders, with the support of the Technical Committee on Health and cooperation from relevant authorities on both sides, to work together and develop a comprehensive plan for the full reopening of all crossing points,” he said.

Guterres also said the Covid-19 outbreak has had a significant economic impact on the island and, while addressing the effects will be challenging, the crisis recovery period will also offer opportunities to close certain long-standing gaps and bring positive changes.

He called on the two leaders to jointly explore restructuring and innovating, diversifying and greening the economy, promoting better and more inclusive social and public services and introducing new forms of economic consumption, production and cooperation models, including through the technical committees and as CBMs.

Guterres, referring to the findings of a gender-sensitive socioeconomic impact assessment of a settlement, he said “advancing gender equality should not, and in fact cannot, wait”.

He called on the leaders to consider the outcome of the assessment for supportive policies to address existing gender barriers and ensure that a future peace agreement can more equally benefit men and women across the island.

Guterres also called for empowerment of the Technical Committee on Gender Equality “to urgently develop an action plan supporting the full, equal and meaningful participation of women in peace talks.” This will contribute to ensuring that any future united Cyprus is more sustainable, safer and more equal, with greater opportunities for all, he said.

Play to tour village coffee shops around the island