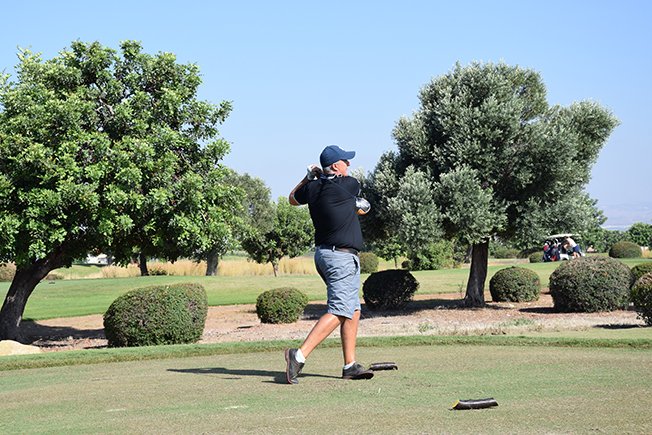 Iain Pyman, a golfer from Whitby, England, has been involved with the sport for the best part of three decades, both as an amateur and a professional. He has played competitively on the main European Tour, as well as the Challenge Tour

“The weather is just slightly better here”, Iain quips, a few minutes into our conversation, adding that “you don’t want to be living in the UK year round”.

Iain Pyman, a golfer from Whitby, England, has been involved with the sport for the best part of three decades, both as an amateur and a professional. He has played competitively on the main European Tour, as well as the Challenge Tour. His eight tournament wins on the Challenge Tour are a record.

I asked Iain what brings him to Cyprus, beyond the weather upgrade. “Actually, we came here for a two-week holiday last September for the first time ever. Right back then we completely fell in love with the place,”, he said. “The culture, the expat community, but also the local people and local restaurants”, he added.

“And then of course you come to play at Aphrodite Hills. A world-renowned championship course with facilities second to none anywhere. It’s an obvious place to base myself in. And then I met Andrew Darker and the team here. We put this plan in place for me to be the golf ambassador here, so I can promote the club, travel the world and be attached to Aphrodite Hills. It’s a good way to put Cyprus and the club further afield”, Iain added.

In reference to the course, I asked Iain what separates Aphrodite Hills from the rest. “Here you can hit balls from one end of the range and go to the other end. So, depending on the wind, as a professional golfer, that’s important. Not many places give you the ability to hit from two different places.”

Aphrodite Hills, with its five tees per area, has the capacity to accommodate players of different skill levels without sacrificing the challenging aspects of the course. Iain adds that the hospitality he’s experienced has also been a factor. “You can go to another course and there could be a language barrier as well. Yes, people speak English around the world, but here I was surprised how many people speak English. Locals make a real effort to speak the language. Everyone’s made us feel really welcome”, Iain said.

I asked Iain to share his opinion on the local golf scene and how the sport is coming along in terms of popularity and acceptance. “I did a talk with the Cypriot junior team. We’re trying to put golf on the map in Cyprus. Trying to get people more understanding of it, to get them wanting to play. And as we all know it starts with juniors”, Iain said.

The Cypriot national team is governed by the Cyprus Golf Federation (CGF). Iain has given his time to give a lecture to the team, providing insight into what it’s like to be an elite golfer. “There are some really good junior players, which is nice”, he said.

Iain added that “having someone like me on the island, if people ask me what it’s like to be a professional golfer at the top level, having that experience, I can pass on that knowledge. So they understand what it takes.”

In relation to this, I ask Iain to describe a typical day for him as a professional golfer. “Let’s say I had a week off from playing competitions or tournaments. I’d take Monday off and then Tuesday to Sunday I’d be practicing 10-12 hours. It’s important that you enjoy that practice, that it doesn’t become a chore. Yes, it becomes a job later on in life, when you do turn pro, but you need to enjoy the game”, Iain says, clearly conveying the love he has for the sport.

I mentioned the misconception about golf being a sport for the very wealthy. “In the UK it’s actually more expensive to take a child swimming”, Iain said.
“People can rent equipment here at Aphrodite Hills. If a kid wants to try it, they can try it, and have a go. Just turn up and ask the shop here at the golf club if you can try it out. Of course you can”, Iain added

I asked Iain about some of his most memorable moments during his storied career. “As an amateur in The Open, which is probably the biggest championship in the world, there’s the Silver Salver, (silver medal), which the leading amateur collects. I won the silver medal for the best amateur. I think that’s a record that’s still unbroken to this day.” Iain said.

“Tiger Woods actually shared it with me three years later. The lowest score ever. So I did it first and Tiger Woods followed me”, Iain says laughing, before adding that “our careers have taken a slightly different path since then.”

Iain also shared another story, this time as a professional. “One year I was struggling to keep my card. I needed a top-five finish. I was at Collingtree golf park and on the 18th hole over water. Am I going to go for it? I did it, hit it over water, on the green. Kept my card”, Iain says.
“I’ve been good under pressure since then. No fear, just go for it. If a shot’s there to be hit, hit it”, Iain said.

Andrew Darker, who is helping Iain on the golf side of things, said that from Aphrodite Hills, on a resort level, they’re proud to support Iain on his journey. The club will offer him all the support he needs so he can realise his dream. Whether in Europe or the US.

“To pull a name from an elite level is very pleasing and makes us proud to have him on board”, Andrew says, explaining that Iain will help with the efforts to make Cyprus an international golf destination.

Before you live a life of regret, listen to Oprah’s story | Goalcast