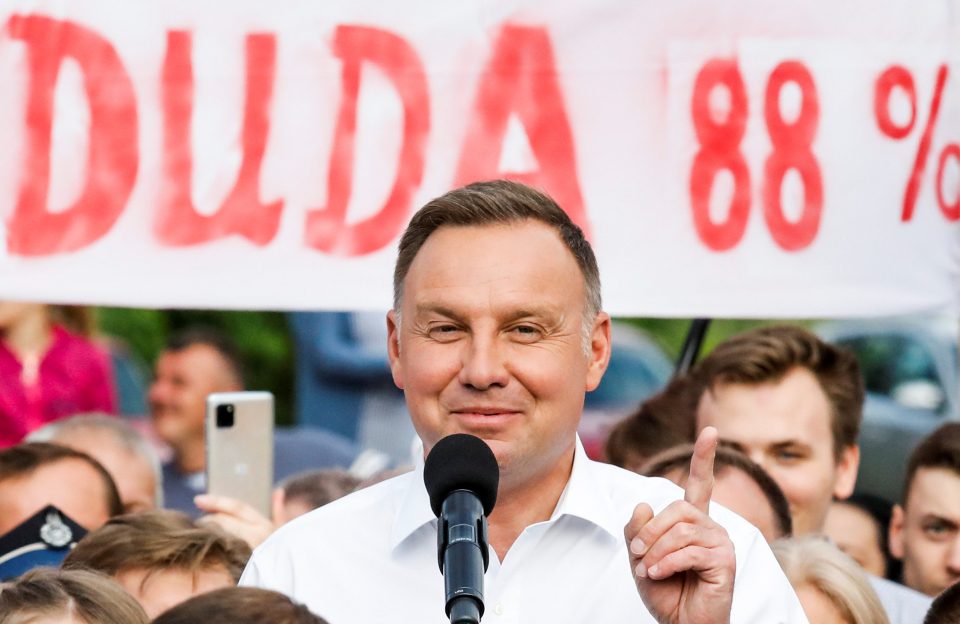 Few people outside of Poland care about the outcome of last Sunday’s presidential election there, but maybe they should. Andrzej Duda is practically a Polish clone of Donald Trump, who will also be seeking re-election less than four months from now – and Duda squeaked out a victory.

Duda only got 51.2 per cent of the vote against 48.8 per cent for his liberal opponent, but Trump doesn’t even need that many votes. The Poles vote for their president directly, but gerrymandered electoral districts and the ‘electoral college’ system in the United States let Trump won last time with only 46.1 per cent of the popular vote. He could do it again.

It’s not a perfect comparison, of course. Duda is more intelligent than Trump, and the Covid-19 death toll is only 40 per million people in Poland, compared to 420 per million in the United States. Moreover the Law and Justice Party he is linked to is generally seen as competent and honest.

The history is different, too. Just as the United States was winning its independence from the British empire in the late 18th century, Poland was carved up by its neighbours and vanished from the map for more than a hundred years. Twenty years after it regained its independence in 1918 it was conquered by Hitler’s legions, and then it fell under Soviet Communist rule until 1989.

So what relevance could Polish politics have for the forthcoming election in the United States? Quite a lot, actually, starting with the very similar ways in which the two countries are polarised politically.

The Law and Justice Party (PiS), in power since 2015, draws its support from exactly the same social groups as Trump’s ‘base’: older, small-town or rural, lower-middle or working class, poorly educated, and significantly more male than female. Also more religious (which in Poland usually means a conservative brand of Catholicism) and much more nationalist.

Duda doesn’t use the slogan ‘Make Poland Great Again’, because it’s three centuries since Poland was a great power in Europe. He doesn’t share Trump’s deference to Russian leader Vladimir Putin, because Russia rivals Germany as the great historic enemy in Polish nationalist thought. But in terms of targeting minorities, the PiS and Duda actually outdo Trump.

The PiS makes a great song-and-dance about hordes of Muslim immigrants threatening Polish national identity (although no sane Muslim would ever choose to move to Poland). But the best targets in the culture wars are people who really live in the country, and since Poland has no minorities of different colours, that mainly means gays and Jews.

Duda made homophobic rhetoric the centrepiece of his re-election campaign, promising to “defend children from LGBT ideology” and comparing the LGBT rights agenda to communism. He promised a new constitutional amendment to ban same-sex adoption, which he described as the “enslavement” of children.

Since the government has already turned the once impartial state-owned media into the PiS’s propaganda arm, it now concentrates its fire on the private media, much of it owned by US and German companies, which still try to offer independent analysis. Duda’s line was therefore to attack the evil foreign-owned media – and, of course, to suggest that they are really serving “Jewish interests”.

It’s not pretty, but Trump recognises a kindred spirit in Duda, whom he has met eleven times since 2017, including an invitation to the White House last month to give the Polish president a last-minute electoral boost.  Duda attacks the media, his party is busily packing the judiciary with reliable conservative judges – and he won re-election. It’s enough to give The Donald hope.

But maybe not enough hope, because there is one big practical difference. However much Trump may claim to love the poor and “the poorly educated”, he hasn’t done much to help them, whereas the PiS puts its money where its mouth is.

Trump has signed a cheque for $1,200 for each American once during the pandemic, and wants to sign one more if Congress approves. The PiS gives every Pole $125 for each child every month, pandemic or not. It doesn’t make much difference to the average urban middle-class Polish family, but it has transformed the lives of millions of families who

live in the small towns and the countryside.

The PiS ‘base’ is also invested in the culture wars, but there’s little doubt that this subsidy, running around $3,000 a year for the average family, gave Duda a vital extra push in the election. If Trump promised a thinly disguised ‘basic income’ like that for the United States, he could probably win too.

He wouldn’t have any serious ideological objection to that, because he actually doesn’t have any coherent ideology. However, the Republican Party’s loyalty to its traditional conservative beliefs, though heavily eroded, is probably still strong enough to make that impossible.