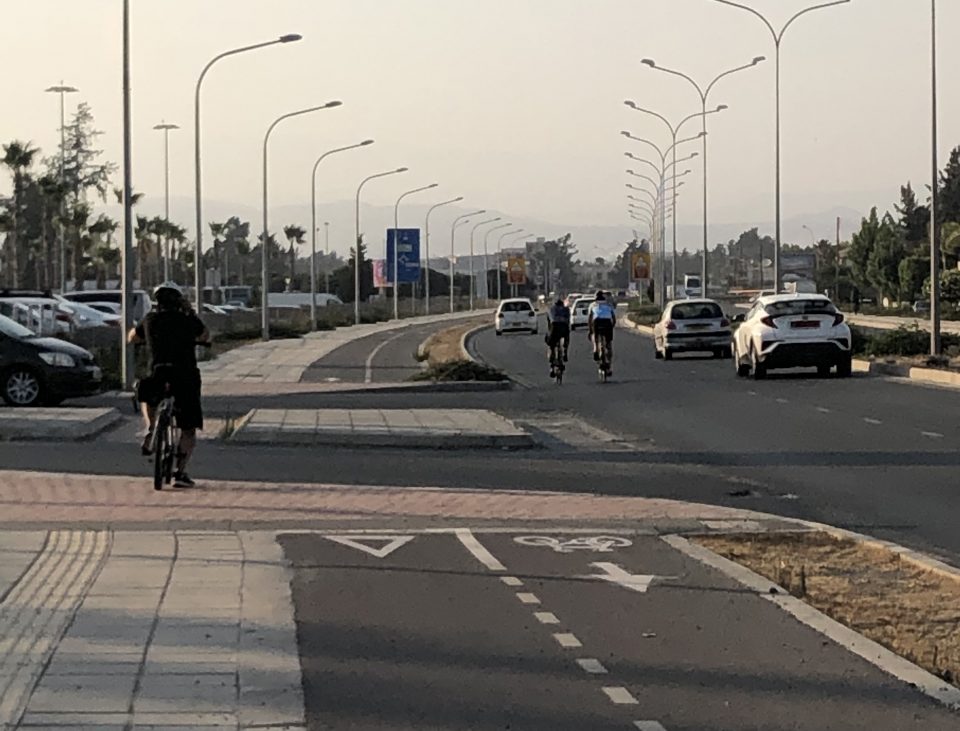 Cycling has certainly increased in popularity, but the harmonious co-existence of drivers and cyclists is still a long way off – and it’s not always the drivers’ fault.

Cypriot drivers are not known for their patience, and those eager to cycle often think twice, saying that there are not enough cycle lanes and that a careless driver will run them off the road.

So it is particularly baffling to see cyclists ignore cycling lanes where they do exist, and use roads instead, often when there is a perfectly functional cycling path just centimetres away.

“It is so infuriating to see. I live next to the mall and there is a two-way cycling path in front of it,” Limassol resident Eleni Michaelidou told the Sunday Mail.

“The cycle lane has no potholes, cars cannot park there and is just fine to use. And yet I keep seeing cyclists cycle on the road right next to the cycling path next to them.”

“Indeed, there are cycling lanes but often times it isn’t functional if you want to cycle to see a friend or go to work.”

A lane will only span so long before the cyclist has to get back on the road again.

“Unfortunately not enough has been done. There are small developments but without a proper network in any city. No one can use cycling lanes properly,” Hadjioannou said.

Additionally, there may be lots of bumps along in getting to and from a road to the cycling lane, he added, making it harder for the cyclist.

There seems to be some confusion over whether a cyclist is breaking the law by using a road where a cycle lane exists. According to Hadjioannou, cyclists are allowed to be on the street, irrespective of a cycling lane.

His view was supported by two separate police officers but member of the traffic police Tasos Asikis, vehemently denied this was the case.

The amendment of the 2018 law regulating bicycles, states in table one, offence number seven, that a person using a bicycle who does not comply with road signs is subject to a €50 fine.

According to Asikis, as cycling lanes are pointed out with signs, not complying with them and instead using the street is an offence.

Where there is no cycling path or lane, cyclists are allowed to use the street.

Regulations also forbid cycling under the influence of alcohol or drugs and include a €50 fine for a cyclist without a light on their bike.

“Cyclists should not be considered a nuisance,” Hadjioannou said. People should be driving slowly in the city anyway and shouldn’t be irritated at having to be careful when seeing a cyclist.

“Let me put it this way. If someone is driving and there is a truck in front of them, they are patient until they can overtake them.”

More cyclists means less traffic, Hadjioannou pointed out. “Those people on bicycles could have been in cars instead increasing traffic.”

It is the lack of proper education in Cyprus that prevents us from seeing it that way, he said.

The island is obviously long way off countries like the Netherlands where cycling is a part of daily life, but rather than create more paths for bicycles, time needs to go towards making proper networks allowing people to use bicycles safely and cohesively, Hadjioannou said.

The tragi-comic epitome of this was the crooked, shoddily painted Limassol bicycle path largely blocked by parked cars which was ridiculed on social media last year, prompting the municipality to promise to investigate and correct the ‘shameful’ embarrassment.

The bicycle path in the area of Omonia Street area was supposed to connect the Limassol Marina with the western areas of the city up to the new port, but it was nothing short of a joke, swerving across roads and even around parked cars.

Michaelidou said she would have loved to cycle in Cyprus but she just felt it to be a health hazard. “My dad wanted to cycle to work which wasn’t too far away, but I was too scared.”

While Hadjioannou defends a cyclists’ right to ignore a cycle lane, he concedes that some cyclists do themselves no favours as they ride three abreast on the road.

According to Hadjioannou, cyclists are allowed to drive on the left side of the street with a maximum of two people side-by-side. Though some drivers get irritated because it’s harder to overtake, it’s safer for cyclists this way and allows drivers to see them easily.

The spike in cycling is a direct result of two recent crises. One was in 2013 during the financial crisis and then recently during the coronavirus pandemic, Hadjioannou said.

“It allows people to escape their problems, to feel better. Especially when cycling in nature when you can cover large distances using your own strength, it really helps people relax,” he said.

“Cyclists have rights too. They are a solution to traffic, the economy, health and the environment.”

Human resources authority tried to reach settlement with organisation that cheated it out of more than €350,000