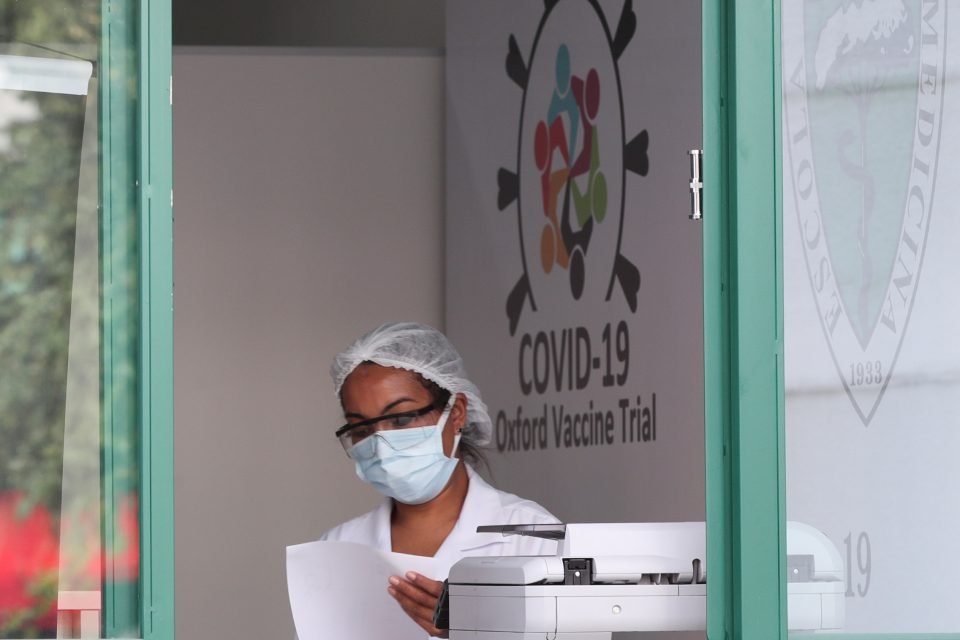 An employee is seen at the Reference Centre for Special Immunobiologicals (CRIE) of the Federal University of Sao Paulo (Unifesp) where the trials of the Oxford/AstraZeneca coronavirus vaccine are conducted, in Sao Paulo, Brazil

AstraZeneca’s experimental COVID-19 vaccine was safe and produced an immune response in early-stage clinical trials in healthy volunteers, data showed on Monday, with the strongest response seen in people who received two doses.

The vaccine, called AZD1222 and being developed by AstraZeneca and scientists at Britain’s University of Oxford, did not prompt any serious side effects and elicited antibody and T-cell immune responses, according to trial results published in The Lancet medical journal.

“There is still much work to be done before we can confirm if our vaccine will help manage the COVID-19 pandemic, but these early results hold promise,” vaccine developer Sarah Gilbert said.

“We still do not know how strong an immune response we need to provoke to effectively protect against SARS-CoV-2 infection.”

AstraZeneca shares spiked higher, but then gave up some gains, to last trade up 0.4% on the day.

AstraZeneca’s is among the leading vaccine candidates against a pandemic that has claimed more than 600,000 lives, alongside others in mid and late-stage trials.

These include shots being developed by China’s Sinovac Biotech, another from state-owned Chinese firm Sinopharm, and one from the US biotech firm Moderna.

AstraZeneca has signed agreements with governments around the world to supply the vaccine should it prove effective and gain regulatory approval. The company has said it will not seek to profit from the vaccine during the pandemic.

Researchers said the vaccine caused minor side effects more frequently than a control group, but some of these could be reduced by taking paracetamol, with no serious adverse events from the vaccine.

AZD1222 was developed by Oxford university and licensed to AstraZeneca, which has put it into large-scale, late-stage trials to test its efficacy. It has also already signed deals to produce and supply over 2 billion doses of the shot.

“Today’s data increases our confidence that the vaccine will work and allows us to continue our plans to manufacture the vaccine at scale for broad and equitable access around the world,” said Mene Pangalos, Executive Vice President of BioPharmaceuticals Research and Development at AstraZeneca.

Israel is in advanced negotiations with AstraZeneca for the future purchase of its experimental COVID-19 vaccine, Israel’s YNET news website reported.

A Health Ministry spokesman said the ministry “does not disclose contacts being held in this sensitive matter.”

The experimental coronavirus vaccine being developed by AstraZeneca and Oxford university was safe and produced an immune response in early-stage clinical trials, data showed on Monday, keeping alive the hope it could be in use by the end of the year.

Israel has already signed such an agreement with Moderna Inc for its vaccine candidate.