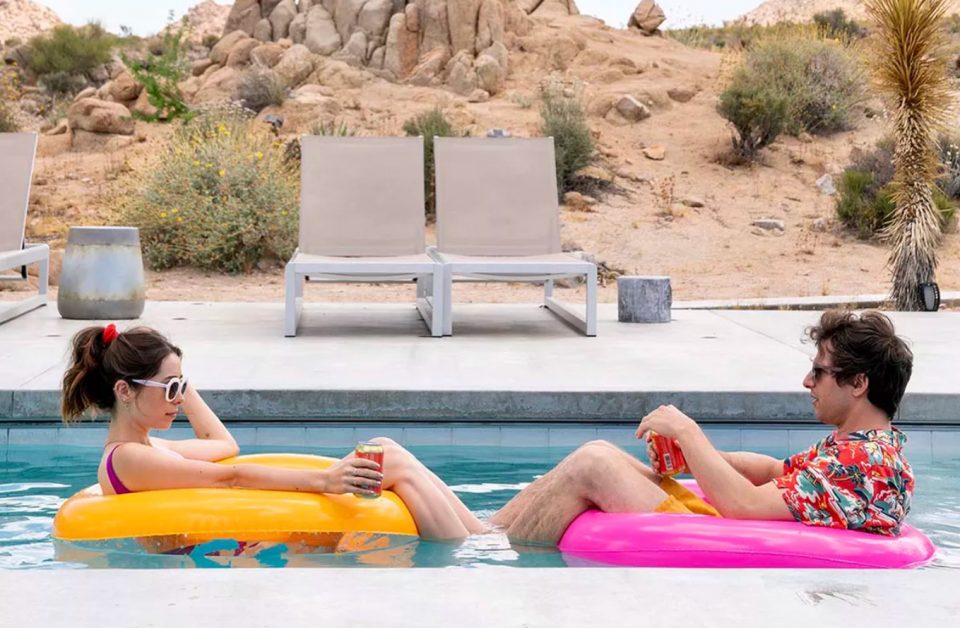 Screenwriter Andy Siara is no stranger to mixing the bluest of comedy with life’s more morbid elements. In 2016’s short film Grill Dog, which Siara co-wrote, two young boys go from joking about naked women and defecating in the wilderness to consoling a dying dog as she bleeds out following a car accident. An elderly woman provides resolution through an act of mercy killing before the boys’ parents arrive to close out the story. The punishment is implied, but the lessons and character arcs are very much experienced.

The story follows Nyles (Samberg) and Sarah (Milioti), two strangers having to deal with being stuck in a time loop, after they meet during a wedding. The concept of a time loop as a narrative device isn’t exactly new but it feels like it’s being used more and more in recent years.

Recently, Netflix’s Russian Doll stretched the format out across an 8 episode series to critical and purportedly commercial acclaim.

Palm Springs does not concern itself with the causality or broader scientific intricacies of the time loop. There is no moment of realisation for Nyles and the story starts so far into his experience that he’s a bonafide veteran of his endlessly repeated day. He has acquainted himself with every living being in the vicinity, he is aware of everyone’s interpersonal and adulterous relationships, and he has explored all possibilities within his own loop.

While we do not see Nyles learning about the rules and limitations of the time loop, we do get some delightfully expedited and spartan exposition in the form of initiating Sarah into the loop, after she also gets stuck in it a few minutes into the film’s first act. You sleep, the day resets. You die, the day resets. Simple.

The simplicity and lack of forced complexity are very much appreciated here. Siara uses the time loop framework to tell an endearing story in a perfectly judged 90 minutes (that’s an episode and a half of most TV series nowadays). The film’s economical storytelling does not reflect negatively on the plot, nor on the dialogue.

Samberg and Milioti have good chemistry together, making excellent use Siara’s writing, as well as the rest of the cast and their involvement in the story. This is not a film that dutifully keeps count of its jokes-per-minute ratio, there is philosophising, rumination, sadness, appreciation, anger, affection, and of course, act-outs, banter and traditional gags. The movie hits the right notes in this balancing act so well that a literal arrow shot through someone’s heart doesn’t feel heavy-handed and too on-the-nose.

While it does not tread new ground, the film makes good use of familiar tropes, fittingly meshing the past with the future. Palm Springs is light-hearted and entertaining without renouncing melancholy or intimacy. Siara should be more than pleased with his first feature film.