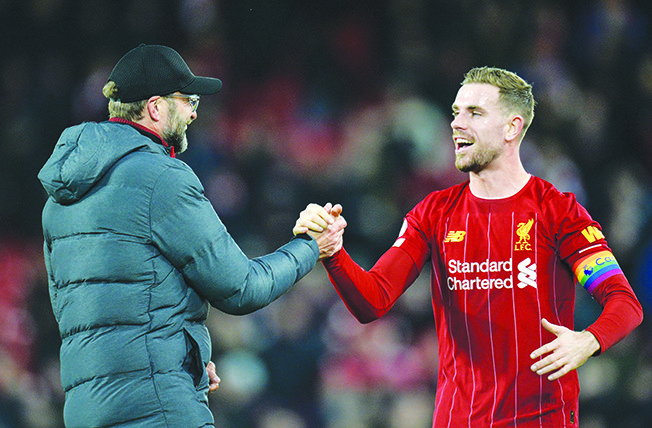 Liverpool captain Jordan Henderson believes manager Klopp is the reason the club's 30-year wait for a league title has been ended. The Reds midfielder will be presented with the Premier League trophy by Sir Kenny Dalglish at Anfield after their final home match of the campaign against Chelsea

Liverpool manager Jurgen Klopp admits his players will “have to put blinkers on” to concentrate on the visit of Chelsea before they can lift the Premier League trophy.

With a first title in 30 years secured almost a month ago, the club’s final home match of the season will see captain Jordan Henderson presented with the silverware immediately after the visit of Frank Lampard’s side.

Klopp accepts it is something of a distraction but is confident they can rise to the occasion, having won just two of five matches since they were crowned champions.

“We have to put the blinkers on,” Klopp said.
“It is not the easiest game I ever prepared with a team because there are two things tomorrow night.
“Usually I don’t have to think about anything else other than the football game and I can be focused.

“But in the end we can only win if we are 100 per cent so we have to go for something as well, it is not as if we are there waiting for the party to start.
“We have to see how we deal with it but I am very positive these boys will put a proper performance out on the pitch.”

Liverpool captain Jordan Henderson meanwhile believes Klopp is the reason the club’s 30-year wait for a league title has been ended.
The Reds midfielder, a contender for player of the season, will be presented with the Premier League trophy by Sir Kenny Dalglish – the last man to guide the club to the championship.

And while the players have had a remarkable two years – also winning the Champions League, European Super Cup and Club World Cup – Henderson has no doubt where the credit should lie.

“It’s no secret what this squad thinks of Jurgen Klopp,” he wrote in his programme notes for the Chelsea game.
“If you think as supporters you appreciate what he has done for this club, you can multiply that by a hundred for the team: he is our leader – he has set the tone for all of this from the day he walked in.

“As I have said previously, and as the manager has said himself, he took over from great foundations laid by Sir Kenny and Brendan Rodgers, and from players like Stevie (Gerrard).

“But he, more than anyone in my eyes, is the reason we are here now about to collect this club’s first league title in 30 years.”
As for Chelsea, manager Frank Lampard confirmed the Blues will give Liverpool a guard of honour on Wednesday.

Lampard’s men will then close their league campaign by hosting Wolves on Sunday, with a third-place finish still theirs for the taking.
Admitting Champions League qualification was always the chief goal for the season, Lampard insisted the Blues are still streets behind the Reds.

On handing Liverpool a guard of honour, Lampard said: “I am very happy to give a guard of honour to a team who have deserved it and have won the league in such style.
“I completely respect their trophy lift but I don’t know (about watching it), that will depend on circumstances after the game. But we go there with huge respect.”

The Cypriot political establishment needs to display some pragmatism