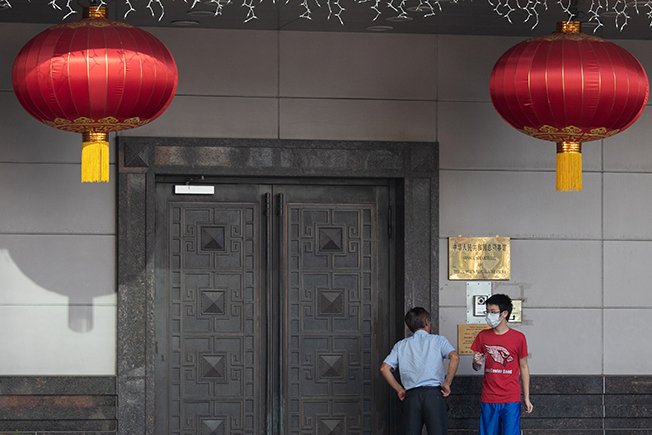 Men try to gain access into the China Consulate General in Houston, Texas

The United States has told China to close its consulate in Houston amid widespread accusations Chinese officials have been involved in spying, marking a dramatic deterioration in relations between the world’s two biggest economies.

Communist Party rulers in Beijing were considering shutting the U.S. consulate in its central city of Wuhan in retaliation, a source with knowledge of the matter said.

China’s foreign ministry called the move an “unprecedented escalation”. Beijing was given just 72 hours to shut the mission. It threatened retaliation but did not say what measures it might take.

The State Department said the move was made “to protect American intellectual property and Americans’ private information”.

The deterioration comes in the run-up to the November U.S. presidential election, in which President Donald Trump and his Democratic rival, Joe Biden, have appeared to compete over who can look tougher in response to China.

Speaking on a visit to Denmark, U.S. Secretary of State Mike Pompeo repeated accusations about Chinese theft of U.S. and European intellectual property, which he said were costing “hundreds of thousands of jobs”.

While offering no specifics about the Houston consulate, Pompeo referred to a U.S. Justice Department indictment on Tuesday of two Chinese nationals over what it called a decade-long cyber espionage campaign that targeted defense contractors, COVID researchers and hundreds of other victims worldwide.

“President Trump has said enough – we are not going to allow this to continue to happen,” Pompeo told reporters. “That’s the actions that you’re seeing taken by President Trump, we’ll continue to engage in this.”

Republican Senator Marco Rubio, acting chairman of the Senate Intelligence Committee, described the Houston consulate on Twitter as the “central node of the Communist Party’s vast network of spies & influence operations in the United States”.

The New York Times quoted the top U.S. diplomat for East Asia, David Stilwell, as saying that the Houston consulate had been at the “epicenter” of the Chinese army’s efforts to advance its warfare advantages by sending students to U.S. universities. “We took a practical step to prevent them from doing that,” Stilwell told the Times.

Ties between the United States and China have worsened sharply this year over a range of issues, from the coronavirus and telecoms gear maker Huawei to China’s territorial claims in the South China Sea and clampdown on Hong Kong.

Jonathan Pollack, an East Asia expert with the Brookings Institution think tank, said he could not think of anything “remotely equivalent” to the deterioration in relations since the U.S. and China opened full diplomatic relations in 1979.

“The Trump Administration appears to view this latest action as political ammunition in the presidential campaign… It’s part of the administration’s race to the bottom against China.”

Overnight in Houston, firefighters went to the consulate after smoke was seen. Two U.S. government officials said they had information that documents were being burned there.

“The unilateral closure of China’s consulate general in Houston within a short period of time is an unprecedented escalation of its recent actions against China,” Wang told a regular news briefing.

“We urge the U.S. to immediately revoke this erroneous decision. Should it insist on going down this wrong path, China will react with firm countermeasures.”

Abraham Denmark, a senior Pentagon official for East Asia under former President Barack Obama, said there was no doubt China represented a “tremendous espionage threat” for the United States, but questioned whether the response was helpful.

“The question here is not China’s culpability – I expect it’s solid – but rather if suddenly closing the consulate in Houston will address the problem,” he said.

A source with direct knowledge of the matter said China was considering closing the U.S. consulate in the central Chinese city of Wuhan, where the State Department withdrew staff and their families early this year due to the coronavirus outbreak that first emerged in the city.

China’s foreign ministry did not immediately respond to a request for comment on whether it would shut the consulate.

A U.S. government source familiar with law enforcement and intelligence operations related to China told Reuters some information which prompted the closure was classified, but some cases involving alleged Chinese spying in Houston were public. The source cited moves last year to fire scientists at a cancer hospital who were Chinese or had contacts with China.

Wang said the U.S. government had been harassing Chinese diplomats and consular staff for some time and intimidating Chinese students. He said the United States had interfered with China’s diplomatic missions, including intercepting diplomatic pouches and confiscating Chinese items for “official use”.

The State Department did not immediately respond to a request for comment on the Chinese charges.