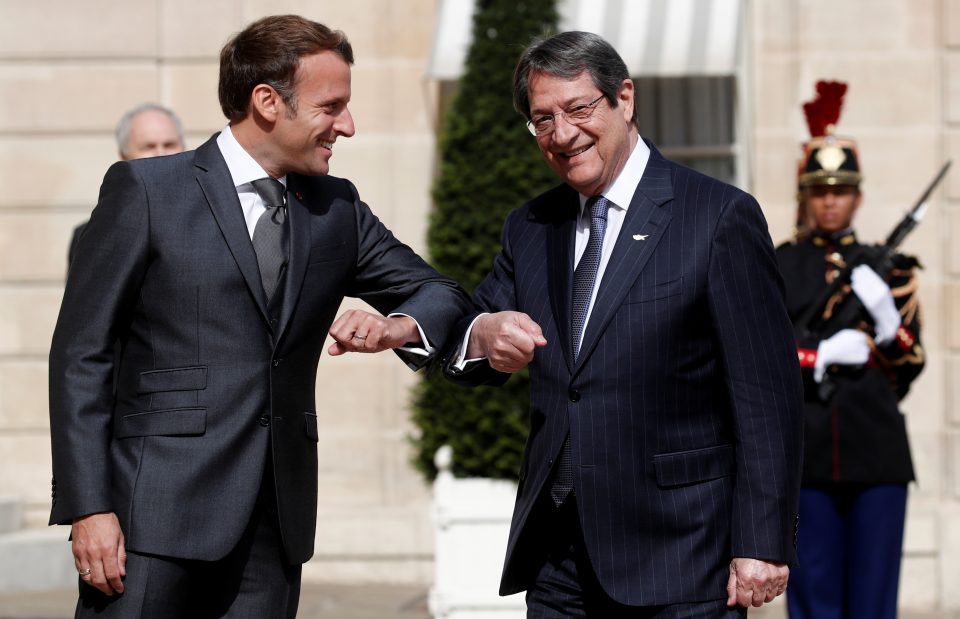 French President Emmanuel Macron said on Thursday it would be a serious mistake by the EU to not respond to Turkish provocations in the Eastern Mediterranean and said he wanted more sanctions on those who violated Greek and Cypriot maritime space.

“Those who are doing that must be sanctioned,” the French president said.

Macron made the comments during a meeting in Paris with President Nicos Anastasiades.

Although the Cyprus government said Anastasiades’ visit to Paris on Macron’s invitation was aimed at discussing bilateral relations, Turkey’s provocations off Cyprus and Greece were top on the agenda.

The meeting took place while a standoff between Greece and Turkey is underway over a Navtex Ankara issued on Tuesday for seismic surveys in an area between Cyprus and Crete, a move Greece said was an attempt by Ankara to encroach on its continental shelf.

Macron said that in this part of the Mediterranean, which was vital for France and Cyprus,  energy and security issues were essential. “What’s at stake is a power struggle in particular of Turkey and Russia which are asserting themselves more and more and in the face of which the EU is still doing too little,” Macron said.

“It would be a serious mistake to leave our security in the Mediterranean in the hands of other actors. This is not an option for Europe and it is not something that France will let happen.”

The EU has already imposed sanctions on Turkey over drilling activities in the eastern Mediterranean, but Macron said more sanctions would be needed to stop the violations.

“I stand fully behind Cyprus and Greece in the face of the Turkish violations of their sovereignty. It is unacceptable that the maritime space of (EU) member states be violated and threatened. Those who are doing that must be sanctioned.”

Anastasiades praised Macron and his initiatives in the region.

For Cyprus, Anastasiades said, France under the leadership of Macron, whom he called a friend, “is a ray of hope” against all the worrying developments in the region.

“The presence of the French navy in our wider geographical area proves in practice the leading role and determination of France to act as a pillar of security and stability,” Anastasiades said.

He added that violations in Cyprus’ exclusive economic zone (EEZ), threats over the opening of Varosha, the recent developments in Syria, Iraq, Libya and now in Greece, highlight the EU’s absence.

He also reassured Macron “that Cyprus will always be the most hospitable country in terms of the French fleet and not only.”

Cyprus, he said, as “a country of real stability and security in the region” has helped evacuate chemicals from Syria in the past, helped in many crises in the Middle East, such as in the case of Lebanon, and will, if necessary, contribute again to this direction.

He added this was achieved through bilateral relations with all neighbouring countries.

He also thanked Macron for France’s stand on the Cyprus problem and his initiatives so that the Mediterranean is not under the control of Turkey and other powers.

Anastasiades reiterated that the EU must not just stick to declarations but take the lead and support its member states.

The Cypriot defence minister met his French counterpart Florence Parly and discussed developments in central and eastern Mediterranean and the bilateral relations between the two countries in the fields of defence and security.
An official press release said the visit was part of a wide range of actions by the two countries which invest in promoting conditions of cooperation in the eastern Mediterranean and actively demonstrates the desire and joint will to strengthen and further improve their bilateral relations in the fields of defence and security in the midst of recent Turkish destabilising actions.

The two ministers expressed a joint will to enhance defence cooperation between the two countries, “which is attached to the joint effort for an effective response to the continuing challenges in the region as well as to promote peace and security according to the international law.”

In the meantime, reports in Turkish media say that seismic vessel Oruc Reis, which was to start surveys off Greece’s Kastellorizo island, is ready to start its activities in the Mediterranean. The vessel was anchored off Antalya in Turkey but reports on Thursday said a towboat arrived in the morning near the seismic vessel while the Turkish navy has sent several frigates to protect Oruc Reis.

Τhough German media reported on Wednesday that Chancellor Angela Merkel’s telephone conversations on Tuesday with the Turkish President and the Greek Prime Minister had prevented a last-minute conflict between Greece and Turkey, local media, citing sources within the Greek national defence general staff reported that the situation has not changed.

Bild newspaper had said in an article that after Merkel’s phone call, the Turkish fleet changed its course.

US ‘deeply concerned’ about Turkey’s activities in the region