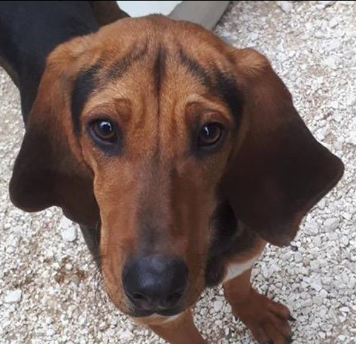 Staff and volunteers are reeling after another dog was snatched from Paws dog shelter in Achelia in Paphos sometime on Tuesday night.

And this time, it looks as if someone with intimate knowledge of the facility is involved, according to the shelter manager, Matthew Harris.

Just a few weeks ago, three dogs waiting to be flown to their new homes abroad were stolen from the shelter. They are still missing.

“We are all absolutely gutted and devastated, and this time they broke in when it was dark and left a stepladder they used at the shelter. They knew how to get in, how to switch the lights on and which dog they were looking for,” an emotional Harris, informed the Cyprus Mail.

Darius, the stolen dog, is a friendly two and a half year old, neutered, male hound, and the shelter manager believes he has been stolen to be used as a hunting dog, as with the others before him.

One of the volunteers feeding the shelter’s dogs, realised that Darius was missing from his pen sometime before 4am on Wednesday morning. They also found a stepladder that had been left propped up against the perimeter fence.

“They came in the dark and switched on the generator to enable them to switch on the lights. I had switched it off when I left. They would have to know where the switch is for this and knew which dog to take. It’s either someone who frequently comes to the shelter, or a volunteer or someone has given the information to a third party,” he said.

Paws is now appealing to the public to donate in order to help them raise funds to ensure the dogs are kept safe.The charity exist solely on donations, fund-raising, sponsorship and money raised through their charity shop.

“We have two security firms giving us quotes for equipment, it is specialised as it has to be solar powered, due to a lack of a mains electricity supply at the shelter,” he said.

In the meantime, the shelter is looking at employing 24 hour security guards to patrol the facility.

Six-month-old Polly and two-and-a-half year old Dana both had homes to go to and were waiting for flights to Germany and the UK respectively, Polly’s initial flight was cancelled due to travel restrictions in the wake of the Covid-19 pandemic. Four year old Hope was also snatched.

This was the first time in the 13 years of the shelter’s operation, that any sort of theft occurred.Harris said that he believes the animals were taken for hunting and also, mistakenly, stolen for breeding, as the thieves were perhaps unaware that the dogs had been spayed.

The Cyprus Association for the Protection and Care of Animals, CAPCA, is the official name of the registered charity which was established around 35 years ago, however, it is known as ‘Paws’, which is the name of their dog shelter in Achelia, found close to Paphos airport.

The shelter is a care facility for abandoned, rescued and abused dogs in Paphos and the surrounding areas.

The new theft has been reported to Paphos police and posters have been distributed to the police, local vets and other establishments.

“If you are offered Darius to adopt or buy, or you spot him in your neighbourhood, please call Paws or Paphos police immediately,” said Harris.

Anyone with any information relating to the theft or whereabouts of the stolen dog, or the previous thefts, is requested to contact Paws, Paphos police, or the citizens hotline number 1460.(This may be done anonymously.)

BoC launches ‘Throwback Thursdays’, a peek into its photo archive