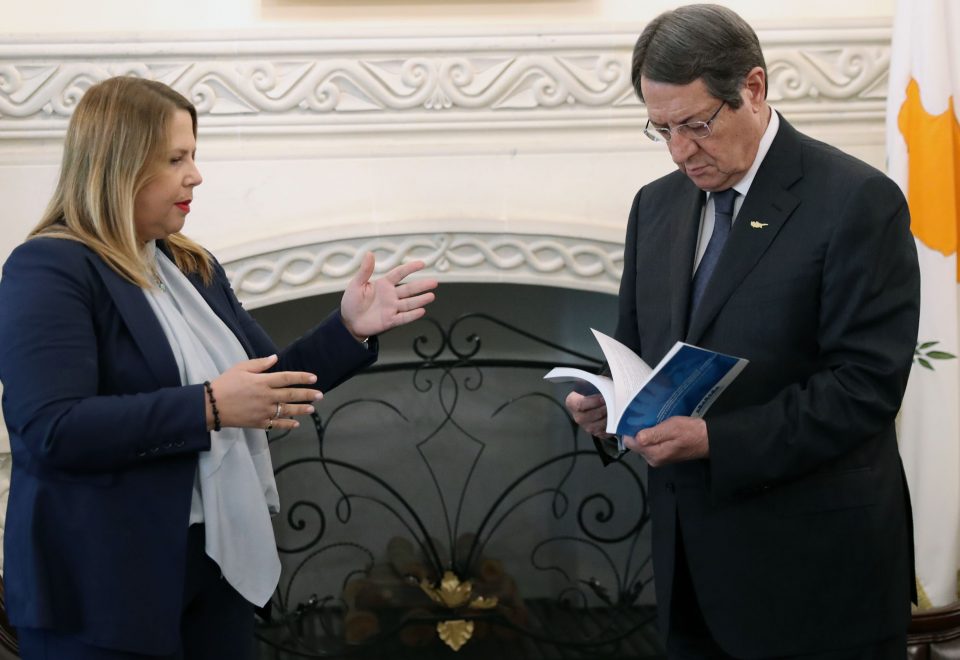 Ombudswoman Maria Stylianou-Lottides said on Friday her office handled over 2,000 cases in 2019 out of the 4,747 cases they had before them.

Handing over her 2019 report to President Nicos Anastasiades, she said 2019 was a year full of challenges “of unexpected events, but also unpleasant ones that brought to the surface deep-rooted, outdated perceptions and stereotypes of our society”.

While she presented the reports, as the Commissioner for Administration and Human Rights, she also delivered a report on mechanisms for the prevention of torture, which she said has already been sent to the United Nations.

In her report, Lottides said her office dealt with 2,132 cases, including issues on welfare benefits, adequate living standards, and discrimination issues.

The office also deemed 507 complaints were out of the ombudswoman’s jurisdiction.

She said there was a constant effort to stamp out mismanagement where it exists.

Her report on human rights covered a wide range of topics related to the enjoyment of basic rights by certain vulnerable groups of people living in Cyprus, such as: long-term immigrants, victims of trafficking, domestic workers, recognised refugees, and applicants for international protection.

Lottides said after dealing with several cases relating to human rights issues, her reports point out there needs to be improvement in this human rights sector in Cyprus.

After her meeting with the president, Lottides said the most difficult issue they covered was that of a teenager who committed suicide last year.

In September 2019, a probe was launched to see if social welfare officials did everything possible to help a 15-year-old boy who was experiencing serious poverty and other family issues.

The boy, Stylianos, was found dead by his father at a farm in a village in the Nicosia district.

Following reports of psychological problems and domestic violence in the boy’s family, social welfare services found themselves in hot water over whether they had handled the case properly and whether the boy’s death could have been prevented.

On Friday, Lottides said the report has been handed to the attorney-general’s office for investigation.

The results of this investigation will show potentially what crimes and violations were committed by individuals connected to the issue.

“Let me say, it was a disappointing result of mismanagement that showcased backwater mentalities, which we want to change,” she said.

She added it was a very difficult issue for them to investigate, as there were many services involved, which necessitated a lot of time for her office to examine.

On his part, the president expressed his satisfaction regarding the prompt intervention of the Commissioner in matters concerning her responsibilities and the objective recording of data, as well as for her remarks “which contribute to upholding the law, prevention and which assist with relevant cases”.

Finally, he wished her to continue to always do her work with the necessary objectivity and sensitivities which are vital to the role of the Commissioner of Administration and Human Rights.

Tyson to return to ring for exhibition against Roy Jones Jr.

How babies see the world