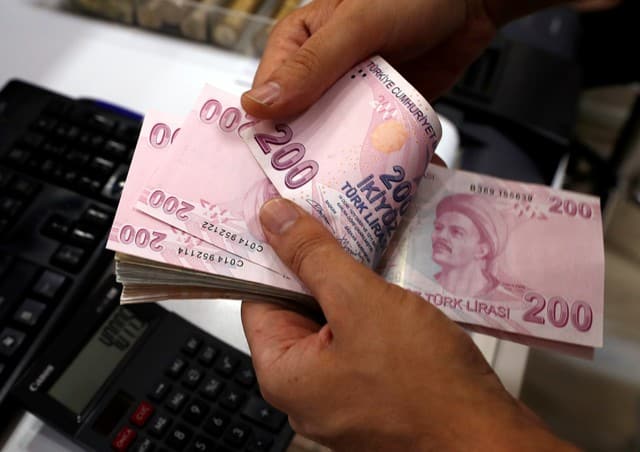 Turkey’s central bank said on Monday the country’s external debt maturing in a year or less stood at $169.5 billion, up nearly $5 billion from a month earlier.

Public-sector debt made up 23.2 per cent of the total. stock. The central bank made up 11.4 per cent and the private sector made up 65.4 per cent, the bank said.

Separately, data from the BDDK banking watchdog showed on Friday that state banks’ short foreign currency positions had increased to $9.7 billion as of July 10, from $8.3 billion a week earlier, as they continue their largest direct intervention in years.

The increase in state banks’ short FX position has coincided with greater stability of the lira, which is trading in a narrow range after settling in mid-May and staying almost unchanged from 6.85 to the dollar since mid-June.

The lira has faced downward pressure from falling interest rates over the last year to support economic growth – vital to President Tayyip Erdogan’s long political dominance – and limit fallout from the coronavirus crisis. The currency has lost some 45 per cent of its value against the dollar since the end of 2017.

The combined short positions of the state banks add to more than $90 billion of central bank intervention since last year by bankers’ estimates, for a total of about $100 billion used to support the Turkish currency.

At $22 billion, Turkey’s non-performing loans (NPLs) have remained high since a 2018 currency crisis laid bare the heavy reliance of construction and energy companies on foreign debt.

With Turkey’s normally fast-growing economy expected to contract by as much as 5% this year, S&P Global Ratings forecasts that its NPL ratio could rise as high as 12% by 2021, from 4.5% at present.