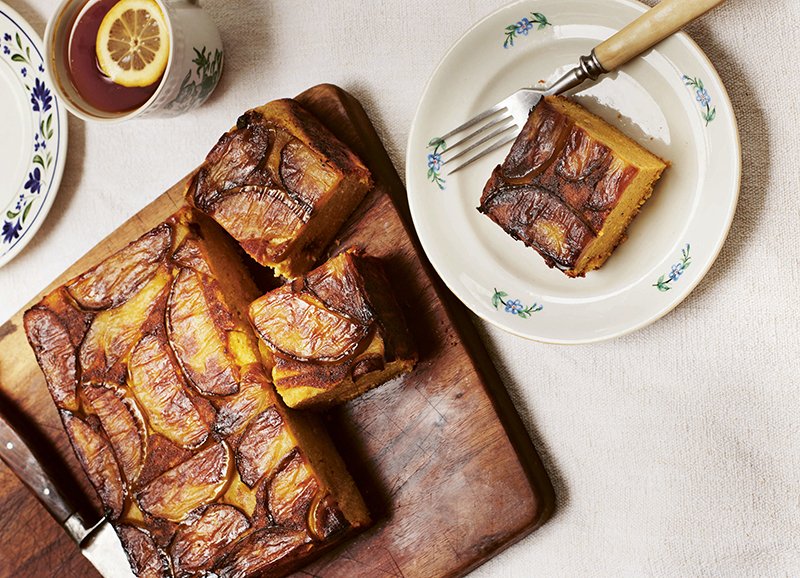 The world might feel a little post-apocalyptic right now, but according to food writer Olia Hercules, come summer, the landscapes of Ukraine can look pretty post-apocalyptic anyway – but for another reason: Watermelons. Fields of them.

“When they’re fully ripe, you can’t really see how they’re connected to the ground,” she explains. “It just looks like a huge field with these beach balls; this really weird barren earth, and then these big green giants. They can grow up to 20kg where I’m from.”

Hercules, 36, was born in the south of Ukraine, growing up in Kakhovka before moving to Cyprus and later England, where she studied at Leiths cookery school and worked for Ottolenghi. Her new cookbook, Summer Kitchens, celebrates the food of those long, hot Ukrainian summers, and the structures in which they were – and are – often cooked.

Traditionally, young couples would fashion temporary homes to use while they built their life – their main house, allotment and orchard. It would then become their ‘summer kitchen’; a space to cook and preserve when the weather grew sweltering.

Flicking through the pictures in the cookbook, there’s definitely a rough, other-era charm to the kitchens.

In the book there are soothing bowls of fish broth with dill to recreate, sourdough loaves for beginners, crisp cauliflower fritters, sour cabbage leaf rolls and pigs’ ears with garlic to try.

Hercules also goes big on fermenting, pickling and preserving everything from chillies to those dystopian watermelons. “We have a special word for it, which means just to ‘make things sour’,” she explains, noting how fermentation is so ingrained in Ukrainian cooking that the science of it isn’t even really considered, despite its sudden trendiness elsewhere. “We love the flavour of fizzy fermented tomatoes just popping in your mouth.”

Pickling, which was usually done in summer kitchens during September, provided a way to make the best of a glut of fruit or veg and ensure the crunch and freshness of summer would be available in some form or other come winter.

Melt 25g of the butter in a frying pan over a medium heat, add the apples and cook for two to three minutes on each side until they start to turn golden. Sprinkle in the brown sugar and cook the apples for another minute on each side, then transfer the caramelised apples to a bowl and let them cool slightly.

Preheat your oven to 200C and grease a 20cm square or round cake tin with butter. Lay the apples in the base of the cake tin.

Put the rest of the butter into the bowl of an electric mixer fitted with the whisk attachment, along with 150g of the caster sugar, and whisk until it’s looking fairly fluffy. Break the egg yolks with a fork and gradually add them, whisking well, then whisk in the vanilla extract and cheese. Transfer the mixture to another bowl, then fold in the semolina or polenta (the latter will result in a cake with more texture).

Wash and dry your mixer bowl and whisk attachment thoroughly, then put in the egg whites and whisk until they start frothing up. Add the remaining 50g of caster sugar and the salt and keep whisking until you have soft peaks. Now take a large spoonful of the egg white mixture and fold it quite vigorously into the butter and cheese mixture to loosen it up. Add the rest of the egg white mixture and fold in gently. Pour the mixture over the apples in the cake tin and bake for 30 minutes, or until it is a little wobbly, but not liquid. Remember it will set more firmly as it cools.

Leave the cake in its tin to rest and cool down, then slice and serve.

Pour one litre of water into a saucepan, add the salt and bring to the boil, stirring to dissolve the salt. Switch off the heat, then leave the brine to cool down to room temperature.

Put the chillies and leaves into a sterilised two-litre jar with a lid, then pour in the brine, making sure everything is completely covered.

If the chillies bob up again, wedge a spare celery stick across the neck of the jar to keep them submerged.

Cover with the lid and leave at room temperature for a few days, lifting the lid from time to time to release any fermentation gases. When you notice the brine becoming playfully fizzy, transfer the ferment to the fridge, where it will keep for many months, slowly getting more intensely sour and spicy.