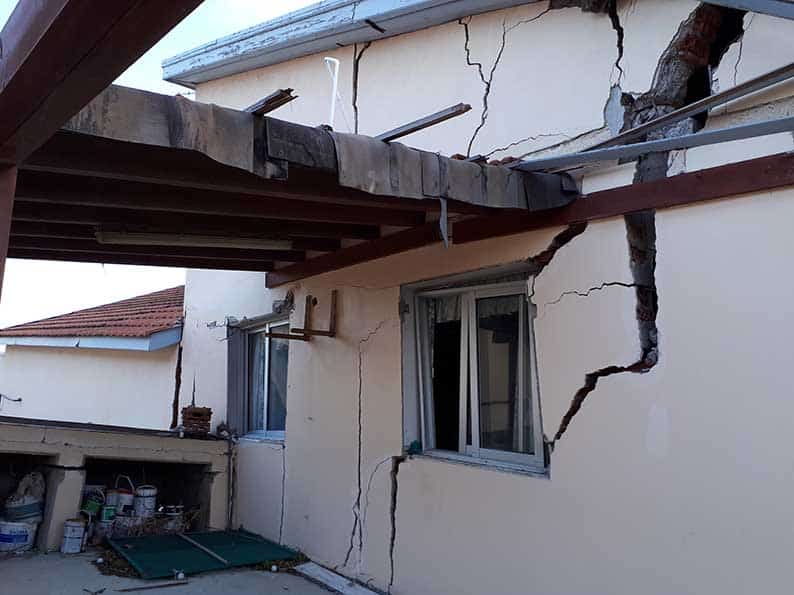 The home of Peter-Fields who had to leave

Homeowners in Pissouri on Friday were uncertain over a government pledge that works would begin in the area in 2021 to stabilise the soil.

“It is very difficult to have confidence” after eight years of nothing, Anthony Walker, affected homeowner and retired chartered surveyor told the Cyprus Mail.

“I was present in September 2015 when the interior minister at the time gave a press conference and said €20m would go to solve problems. In the intervening time, nothing happened.”

On Thursday, the government said earthworks would commence in early 2021 at a cost of around €33m to stabilise the soil in the Pissouri area, where subsidence has caused serious damage to dozens of properties there throughout the years, with houses falling apart.

Following a visit to the site, Interior Minister Nicos Nouris said a study has recommended excavations at several points in the area, some to a depth of 39 metres, and the insertion of a mesh of shoring piles in a bid to stabilise the soil.

The project will also feature the construction of rainwater runoff and sewerage systems. Upon the project’s completion, said Nouris, there are plans to build public amenities for the community, such as sports grounds and sports facilities.

In addition, some of the land in the area would need to be expropriated.

The final report on the action to be taken will be submitted around January 2021, after which the government will immediately invite tenders for the construction project.

“This ambitious project is not expected to be finished before the end of 2022,” said the minister.

According to surveys, the land has been shifting by approximately 8 centimetres a month.

Many of the affected homes in Pissouri have virtually collapsed, the result of a continuous and accelerating landslide, and a number of residences are deemed unfit for habitation.

The problem dates back to at least 2012.

Lawyer for the Pissouri housing initiative Georgia Elina Zoi said on Friday this was one of the largest projects to be undertaken in Cyprus and there was trust towards Nouris as so far “he hasn’t delayed anything.”

Problems with delays tend to come from the district authority but the minister has pledged that the safety and security of the residents is a priority, according to Zoi and has even gone as far to say that means if they need to be relocated, this will be done.

Chairman of the initiative Peter Field said “we are obviously very much in the problem. We were evicted five years ago, rented and now established a new house in a new area.”

The government decision is “long overdue,” he told the Cyprus Mail.

Nonetheless, there is still uncertainty as to whether there will be compensation for people such as himself that have lost their home.

According to Zoi, the minister said it would be irresponsible to talk about compensation at the moment, stressing that the government is focused on stabilising the area and resolving a chronic problem.

Our View: Anastasiades could not have asked for more from France’s president

Betting against the FOMO stocks rally