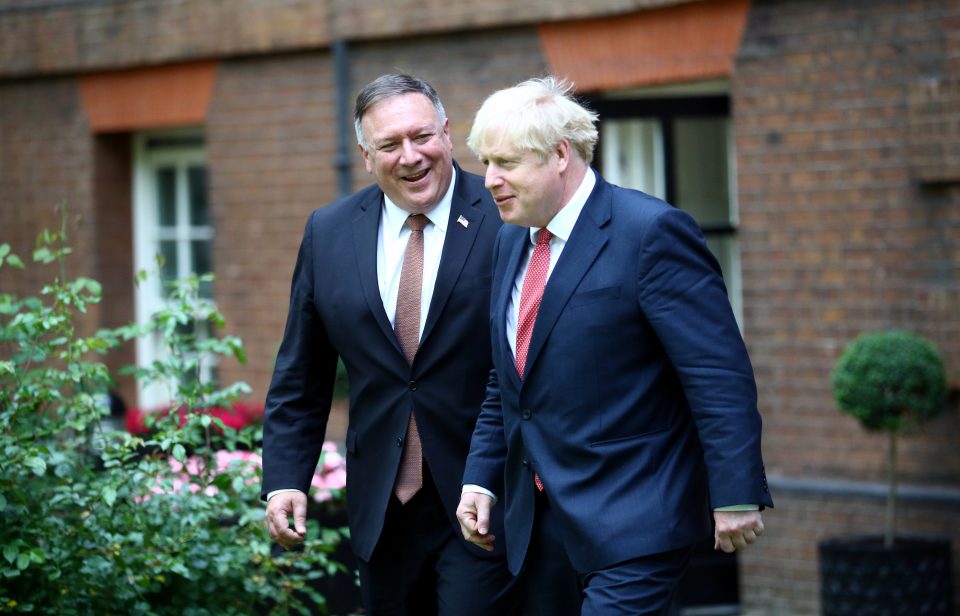 Is there going to be a new Cold War with China? Probably not. Consider the case of Huawei.

Mike Pompeo swept into London on Tuesday like an overweight Darth Vader, while his local satrap, Boris Johnson, waited nervously in Downing Street for judgement. People swore they could hear Pompeo’s cloak swish as he strode through the door. But it was all good: the British prime minister had done enough to appease the overlord.

The subject at issue was Huawei, the Chinese telecommunications firm whose equipment has been selling to governments throughout the West because there are no comparable Western products available at a competitive price.

The US response has therefore been political, not commercial. It demands that its allies ban Huawei on ‘security’ grounds.

The first US strike was in late 2018, when it got Canada to arrest Meng Wanzhou, Huawei’s chief financial officer, as she was changing planes on her way to Mexico. She is still in Canada fighting extradition, while two Canadians are held in Chinese prisons effectively as hostages for her release. The initial US charge was breaking sanctions against Iran, but she’s now accused of stealing American trade secrets.

Britain had agreed to involve Huawei heavily in building its new 5G network well before Johnson became prime minister, but he stuck to the deal despite mounting US pressure to cancel because he is taking Britain out of the European Union and into what is potentially a very grim future.

More than half Britain’s trade is with Europe, but a free trade deal after it has left looks increasingly unlikely. What countries could pick up at least part of the slack? Only the US or China, so Johnson desperately wanted to keep both of those options open. Washington, of course, wanted him to foreclose the Chinese option.

Johnson stuck to his guns right down through the past year, reassured by Britain’s own security services that the Huawei technology posed no threat, but eventually the US pressure became irresistible. Huawei was told that it would not be participating in Britain’s 5G phone network, and that all its technology in the 2G, 3G and 4G networks would have to come out by 2027.

0nly days later, however, British officials whispered in Huawei’s ear that all was not lost. Britain might reconsider its decision next year. Nobody said explicitly “after the US election”, but obviously Britain would be keen to bring Huawei back on board if Donald Trump loses that election in November (as he now seems quite likely to).

Word about this reached Washington in microseconds. (When will they learn that in the modern communications environment, anything you say to anybody instantly becomes known to everybody?) So Johnson was understandably anxious as he awaited the arrival of the American viceroy. Sorry, secretary of state.

But it was all right with Pompeo. Johnson would only be disloyal if Trump loses, and Trump won’t lose because he’s going to start a new Cold War. That’s the plan – but it won’t work.

It won’t work because none of America’s allies, not even one as desperate as Johnson, believes that China is a threat grave enough to justify a forty-year military confrontation. Or even a five-year confrontation.

They are not naive about the current Chinese regime’s flaws. It is a nasty, corrupt dictatorship, intolerant of dissent and oppressive towards its minorities. But it is not territorially expansionist except in its own immediate neighbourhood (Hong Kong, Taiwan, South China Sea), and it is not ideologically attractive even to its own citizens.

The only ideological tool available to Xi Jinping is nationalism. He would deploy it if necessary to defend his own power, just as Trump is doing now, but for a sustainable cold war there needs to be a more credible sense of threat than is currently available to either party.

The idea that China is “the central threat of our times,” as Pompeo put it on Tuesday, is laughable. It’s a formidable competitor economically (although demographically speaking it has feet of clay), but it’s simply not interested in a classic military confrontation.

China does not bother, for example, to maintain a strategic nuclear force remotely comparable to America’s or Russia’s. It truly believes that nuclear deterrence makes that kind of war insane, and keeps only enough missiles to deter a crazed attacker. The border dispute with India is remote and petty, and will not be allowed to escalate by either side.

The other major powers, including the EU, are simply are not buying into the Trump-Pompeo vision of a world divided into two hostile and militarised blocs like 1945-89. Even Boris Johnson, for all his sub-Churchillian pretensions, can’t take the notion seriously and instantly hedges his bets after he has to give it lip-service.

“Don’t defend Trump – attack China!” said the instructions sent to the Republican Party’s senatorial candidates, but it doesn’t work outside the United States. It probably won’t work inside either.

Coronavirus: ‘Restoring restrictive measures the last resort and we must all prevent it’