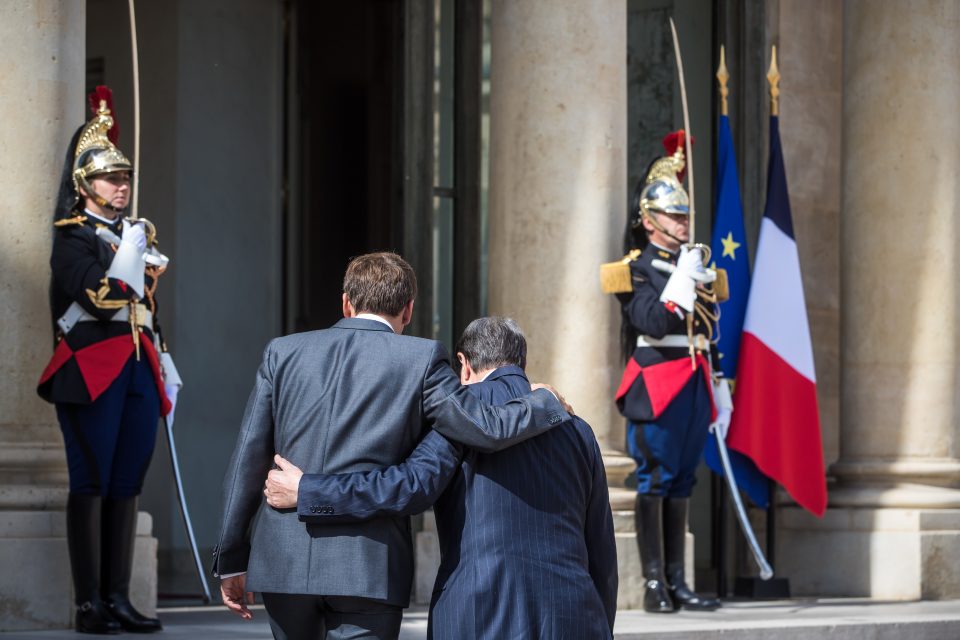 Best buddies: Macron and Anastasiades in Paris on Thursday

WITH France on our side will we finally be able, as the Yanks would say, to kick Turkish ass, metaphorically speaking of course? Or at least clip the wings of the megalomaniac Islamist who seems hell-bent on turning Turkey into a Saudi Arabia-style democracy, while bullying all his neigbours?

Anything is possible after Prez Nik’s triumphant visit to Paris and the comments made by President Macron, who stood “fully behind Greece and Cyprus in the face of the Turkish violations of their sovereignty”. The violations were “unacceptable” and those “who are doing this must be sanctioned”, he said in what must have been music to the ears of our Nik who has made sanctions against Turkey his mission.

Having France’s backing will strengthen the Greece-Cyprus argument for sanctions at the EU, whether the necessary unanimity is achieved is another matter. The Germans and the Italians are not very keen on antagonising President Erdogan and neither are other states given the refugee services Turkey has been providing the Union.

Even if the EU is persuaded to impose stronger sanctions than the pitifully ineffective targeted measures of last year, will they have any positive effect? Sanctions have not worked in the case of North Korea’s nuclear programme, Iran’s funding of terrorism or Russia’s annexation of Crimea, so why would they work on a power-mad autocrat who goes out of his way to offend and make enemies? Just asking.

THERE WAS no way our publicity-smart foreign minister Nicos Christodoulides could allow his boss to take all the glory for the Paris visit. First thing on Friday morning he reverted to his dear role of government spokesman, appearing on Trito radio show to talk about what was discussed with Macron.

Was the actual government spokesman KK, who was also in Paris, not trusted to talk about the meeting, or had Christodoulides told him he would do the talking because it would help build his presidential profile? KK is not the smoothest or sharpest spokesman there has ever been and he often messes up when answering questions, but does that mean he has to be sidelined whenever Christodoulides sees an opportunity for earning political brownie points?

And he does not always act very diplomatically. On Friday morning he sounded like Macron’s spokesman, informing the radio audience the French president was working in the direction of France having “a leading role in the (eastern Mediterranean) region”. He also told us Macron would invite the leaders of the seven southern EU member-states for a meeting in Paris in August.

And then he resorted to some self-aggrandising, childishness of the ‘I know but I am not telling you’ type, by declaring, “we cannot reveal everything that has been agreed yesterday.” So, why even mention it?

BEFORE the opening of the airports, there were high hopes that tourists would flock to Kyproulla as soon as airlines started flights because we had done so well in our fight against the pandemic and we would promote our heatwave isle as a safe destination.

It was a fair point, but things did not pan out as we would have liked, and our deputy minister of tourism, Savvas Perdios, should be given a new job title – minister of bad tidings. A few days ago, he revealed that only half the tourist arrivals of the 200,000 expected would arrive in August and that this was the best-case scenario, based on the assumption that Brits would not need a health certificate to visit in the second half of the month. But if they do the minister of bad tidings will have to step into action again.

THERE ARE thousands of hotel workers having to survive on €360 a month in state help. I wonder if our epidemiologists would be so uncompromising in their public health advice to the government if these recommendations resulted in their wages being reduced to €360 per month. And how many politicians would have listened to such advice if their income was similarly reduced as a result?

If the politicians carry on listening to the epidemiologists, next year the state won’t have the money to promote Kyproulla as a safe tourist destination.

ANOTHER organisation that seems to be facing cash problems is the Health Insurance Organisation, which paid an ophthalmologist €970,000 in one year and three doctors a total of €1.7 million in seven months, according to the mighty Odysseas. But the HIO has not shown the same generosity to the island’s dermatologists that were informed this month that their unit payment for June had been arbitrarily reduced from €13 to €11.7. This despite the fact the HIO had guaranteed €13 as the minimum unit payment. It told them this would go up to the minimum in August, presumably because patients and doctors would be on holiday and there would be fewer visits to doctors. The row can resume in September.

A GROUP of parents have organised themselves into a pressure group, to persuade the UK government to exempt their sons from paying the extortionate university tuition fees that will apply to all international students from September 2021. They argue their sons are being penalised for being forced to do army service this year, whereas their female classmates will be eligible to a loan to cover the £9,000 a year tuition fees. Tuition fees next year rise to over 20 grand, so they have a point, but the unfairness is inflicted by the Cyprus government not the UK’s. The ubiquitous foreign minister has offered to help them, but pleading with the UK government to make concessions to your students, so they can attend UK universities seems a bit inconsistent for a government that wants to promote Kyproulla as higher education centre. As Christodoulides would say, this sends a very powerful message, even if it is the wrong one.

AKEL-DIKO candidate for Aglandjia mayor, Kostas Kortas, must have had his ear pulled by his comrades for attending the gathering of Aglandjites demonstrating against government plans to house asylum seekers in their area. The gathering was also attended by Elamites who always jump on the xenophobia bandwagon.

Kortas was obliged to issue a statement saying: “The political exploitation of social issues or events by residents, in the service of fascistic and extreme right expediencies, as Elam had done, is unacceptable divisive and reprehensible. Aglandjia was, is and must remain at a distance from misanthropic behaviour.”

This came as a surprise, considering Kortas had attended the gathering to support the demand of the residents, ignoring the anti-demo organised by Akel at the same place in support of the asylum centre. And as Elam noted in a statement, “Kortas had no problem being, at the place of the event, with the president, officials and members of Elam, nor had any qualms about greeting the spokesman of the movement.”

FIVE of us have a WhatsApp group that primarily discusses football matters and lot of nonsense. It was therefore a big surprise, when the senior member of the group decided, on the black anniversaries to give us accounts of his experiences as a 19-year-old National Guardsman, serving at an artillery unit in Athalassa (known as 189MPP) during the coup and the invasion. I thought our establishment could mark the black anniversaries by reproducing excerpts of his accounts.

On July 15, he wrote: “On a day such as this, many, many years ago, I was threatened with summary execution by Major Gotsis, head of 189MPP. The reason was I took shots at a helicopter flying over the Rik/Geef area of Nicosia, with a big mean anti-aircraft machine gun. Thankfully, I missed (my story from ’74 was one of near misses, bad in the main but one or two saved my skin). I had been told to shoot at anything that flew because they were expecting the Archbishop to escape by helicopter. Turned out it was a pro-coup helicopter.”

On July 16, he wrote: “On a day such as this, many, many years ago, I was stationed at the Fota of Kalispera (the traffic lights at the entry to Nicosia from the Limassol highway) controlling the entry point to Nicosia when a citizen made an appearance on a high balcony of the Kalispera building. I saw this as a clear and present danger and turned the machine gun on the building. As he did not go inside, I fired (we had been warned about snipers). I missed and he went inside faster than you can say near miss.”

On July 19, he wrote: “On a pleasant evening such as this, many years ago, my father arrived at the gates of 189MPP with a truly worried look on his face. Told me he heard on the BBC World Service that Turkish warships had sailed for Cyprus and barring miracles they would arrive on our shores within the next 24 to 48 hours. I remember distinctly my pride when I realised that at only 19 I would have the honour of laying my life, soul and body on the line for my country. I swelled with pride and my heart was thumping wildly.

“To die for one’s country and preserve Hellenism our beloved island was a price I was happy to pay. Or maybe my feet turned to jelly and I asked my father if there was any chance of the British stopping the invasion. Thoughts of never being able to see Spurs and the Rolling Stones live, did cross my mind, so it could be that the truth was the latter. It was too long ago. So I will go with the first version.”

Next week: the artillery sergeant’s experiences in the invasion

Our View: With tourism crushed, it’s time for an economic rethink

Mother given minutes to say goodbye to extradited son