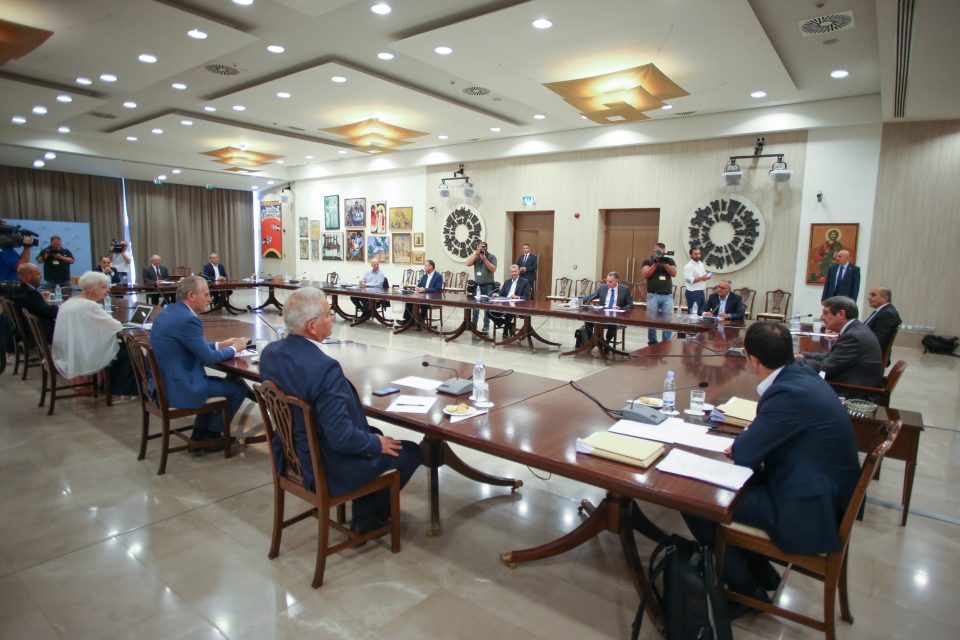 President Nicos Anastasiades on Tuesday briefed party leaders on the latest political developments, including his meeting last week in Paris with French president Emmanuel Macron and other EU leaders, prompting a debate on increasing militarisation of the region due to Turkish activities in the Eastern Mediterranean.

Party leaders appeared to be divided on how Turkey should be handled, with at least one, socialist Edek, calling for beefing up defence while the majority insisting the situation should be handled through diplomacy.

Speaking after the meeting at the presidential palace, government spokesman Kyriakos Kousios said the president had also briefed the party leaders on his meeting recently with UN Special Representative Elizabeth Spehar ahead of the renewal of Unficyp’s mandate, which was approved later on Tuesday. Anastasiades’ recent contacts with Greek Prime Minister Kyriakos Mitsotakis were also on the table, as was his brief meeting with German Chancellor Angela Merkel on the sidelines of the European Council meeting.

“The president answered clarifying questions from the political leaders and an overall assessment of the situation was made as it is evolving today,” the spokesman said.

To a question on the handling of the escalation situation, Kousios said: “The policy of the President of the Republic regarding the settlement of the Cyprus problem, which is our main goal, has been clearly stated and is constantly repeated that it should be done through negotiations. We do not want the militarisation of Cyprus in any way,” he added.

Edek leader Marinos Sizopoulos said the president had given them a thorough briefing. He said his party insisted and will continue to insist that the only way the current situation can be handled is through the operational upgrade of the armed forces of Greece and Cyprus, through a single defence area that would include increasing Greek forces on the island, and allying with countries such as France, which he said had now confirmed that its interests in the region were aligned with those of Cyprus.

Main opposition Akel leader Andros Kyprianou said however his party was concerned with the turn of events that were taking Cyprus further and further from the government’s stated goal of seeking a Cyprus solution.

“The escalation of Turkish aggression takes us away from the goals we have set as the Republic of Cyprus,” he said. “It is not an exaggeration to say this situation has brought us to the brink of a conflict with incalculable consequences for Cyprus, Greece and Turkey itself but also for the wider area.”

Kyprianou said it was obvious that developments in recent years, “are increasingly distancing us from the goals we have set”, which he said were first and foremost a solution to the Cyprus problem, based on the relevant UN resolutions, high-level agreements, international law and the principles on which the EU is based.

Asked to comment on what was discussed in Paris, Kyprianou said: “Many issues arise, which I do not hide from you, that we are concerned about.” He also believes the president did not fully inform the party leaders of what was agreed in Paris.

This was echoed by ruling Disy leader Averof Neophytou who said: “Cyprus’ weapons are international law and our country must exhaust all of its bases, both at European and international level, and Europe must play its rightful role in order to deal effectively with Turkey’s provocative actions.”

Diko leader Nicolas Papadopoulos called on all political forces to unite and mobilise.

Asked about France, he said: “We should seek to upgrade alliances with important regional players. I believe that a country like France, which considers the Eastern Mediterranean to be a region of significant and strategic importance, is a country with which, of course, we must seek new cooperation.”