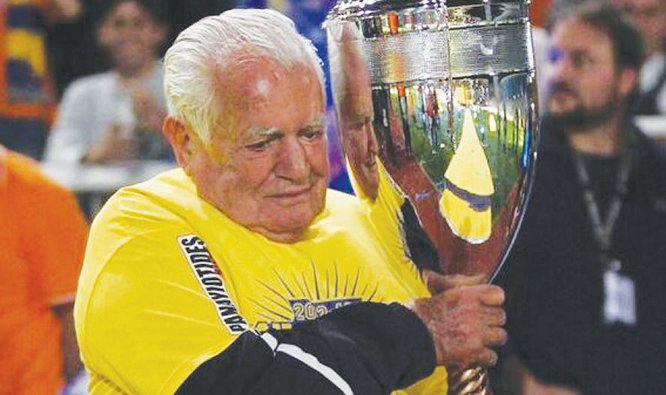 Antonakis Loukas holds the Cyprus championship trophy after one of Apoel's many title triumphs. He died on Wednesday night at the age of 87, nearly three months after being hit by a car while riding his moped

Long-serving Apoel Nicosia caretaker Antonakis Loukas has succumbed to serious injuries sustained in a road accident on May 6.

Loukas had been in critical condition after being hit while riding his moped by an 83-year-old man in Strovolos, Nicosia.

He had been hospitalised at the American Medical Centre in Nicosia since then. He was 87 years old.

Apoel, who had provided Loukas with medical care from the club doctor, announced the news on their Twitter account late on Wednesday night. “Mr. Antonakis has left us. The eternal Apoel supporter and permanent Archangelos resident passed away at 87 years old. May he rest in peace. Enjoy paradise, Mr. Antonakis”, a statement said.

Tributes have poured in for Loukas, with current and former Apoel players, as well as other Cypriot clubs, expressing their condolences.

“Apollon Limassol and its thousands of fans express their deepest condolences to the entire Apoel family”, Apollon’s statement said, before calling Loukas ‘a pure and romantic servant of football”.

Ermis goalkeeper and former Apoel star Urko Pardo spoke about Loukas in an Instagram post. “You were one of us. Every day I saw you with a smile on your face”, Pardo said. “I hope no player who has been through Archangelos ever forgets you”, Pardo added.

“It was winter 1999. He was the first person I encountered in the first team dressing room. We always saw him there, every day, when we were little, living in his room situated in the dressing room area. His cats and dogs kept him company, along with some friends and family. To say that Apoel was his family means so much more to him than any of us, no matter how much we’ve lived or felt it. For Antonakis, Apoel was his entire life. Literally.

“Back then, he used to wash our socks by hand, in a small sink, like a terrible washing machine, along with one or two small washing machines for the kits. No dryers, no assistants. He washed, hanged, gathered, ironed, prepared the clothes for games, training sessions, and pre-season sessions and games.”

“He rolled the medical dressing we used on our ankles. Quietly, in his corner, he patiently waited for training to end and started all over again. He was a proper soldier, not like us, moaning when he happened to forget something.

“Times changed and help arrived. Equipment, dryers, washing machines, better facilities. Antonakis, even from a distance, discreetly, stoically, waited for training sessions and games even if he wasn’t involved in the dressing room anymore. He was immovable from his spot by the pitch, as if it gave him oxygen, a bit more life. Now your post has been orphaned, Mr. Antonakis, but you will always be there.

“He gave everything and, I assume, received a lot back, mostly in intangible terms. He deserves the highest honour and gratitude from all of us who he took care of all these years. Apoel and Archangelos have lost a lot in terms of soul and tradition with his passing, but are richer for the legacy of dedication this pure and loyal man has left behind. Enjoy paradise, Mr Antonakis. Thank you”, Alexandrou concluded.

“We all admired his dedication and love for Apoel over the decades”, Leonidou said. “He was always so enthusiastic and optimistic about the club and lived at their Archangelos base for many years.”

“We even teased him when we saw him fully kitted out in the team colours, no matter where he went or what he was doing.”

“His passing is a great loss and we will always remember him with so much love. RIP”.