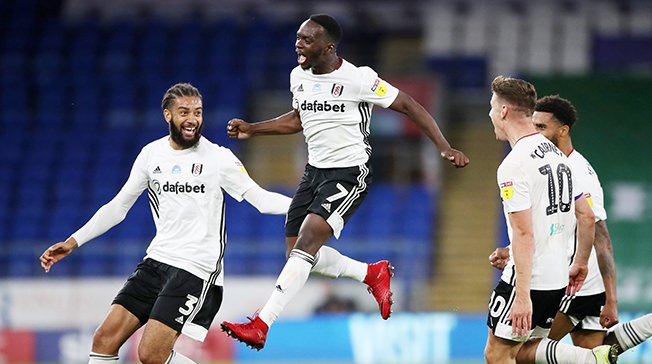 Scott Parker believes Fulham will need to repeat the hard-nosed mental “ingredient” that saw them past Cardiff to beat Brentford and reach the Premier League.

Fulham lost 2-1 in the Championship play-off semi-final second leg at Craven Cottage on Thursday night, but still reached the final 3-2 on aggregate.

Neeskens Kebano’s fifth goal in four games was enough for Fulham to seal their place in the play-off final, with Curtis Nelson and Lee Tomlin on target for luckless Cardiff.

And after a nerve-wracking and gritty finale on Thursday, manager Parker admitted Fulham will need plenty more steel to beat local rivals Brentford at Wembley on Tuesday.

“We’ll need the ingredient I saw at times tonight, and that ingredient is a real mentality about you, that when the going gets tough; technical ability, what qualities you have, go right out the window,” said Parker.

“It becomes an understanding that ‘I need something to fall back on’, and tonight was a prime example of that in the second half.

“In the first half our technical ability, our shape, our precision and tactics all had us in a good position. But the second half had nothing to do with that.

“And it was that moment that was not about quality or technique or ability, it was about just doing what you’ve got to do to win a football match, get through this game, and we did that.

“That’s constantly my message to this team. And that’s what we’ll need again in the final.

“Overall we’ve got ourselves to the final, which is an incredible achievement in terms of a long drawn out season, the 48th game that was tonight.

“The goal was to get to the final and we have done that. The performance and where we were was tough. Cardiff made it very difficult for us, come here like a wounded animal after the first leg and had nothing to lose, in that sense.

“You see the difference between the two teams, a bit of an edginess to us, while goals change that equation.

“They had nothing to lose. We sensed that, the way they play they constantly put you under pressure from all over the pitch.

Cardiff boss Neil Harris admitted his dejection that his side had not turned the tide from their 2-0 first-leg deficit and inched through to the final themselves.

“I’m disappointed we haven’t got through, I’ve got to be honest,” said Harris.

“I had the belief still coming here tonight that we could get the win and go through. Most people didn’t but I know the capabilities of the group.

“If we’d got one more goal we would have gone on and won it. We were written off the other night, which I wasn’t happy with, but we’ve bounced back again.

“I wanted us to chase the game, in our own manner. And the players deserve the credit for how far we’ve come.”

Deported foreign nationals were all from ‘safe’ Georgia