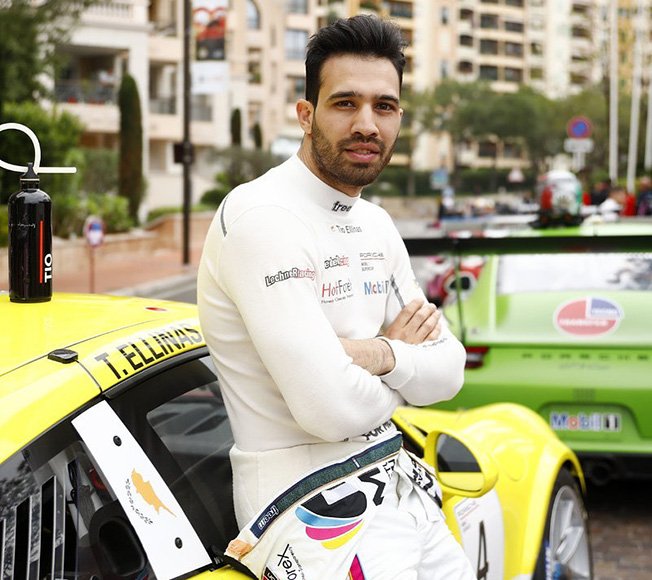 Tio Ellinas is the only Cypriot to have driven a Formula One car. He is currently under contract with Porsche and part of the Lechner Racing team

Competitive by nature and instinctively restless, racing car drivers around the world have probably been the sports people who have been most affected by the coronavirus pandemic.

Tio Ellinas, the most successful ever Cypriot race car driver, was no exception. Covid-19 might have dented his season, but he is already preparing for next season, both physically and mentally.

“This year is a lost one for everyone, next one is going to be better”, he told the Cyprus Mail in an exclusive interview.
“I’m already preparing for 2021, when I reckon things will go back to how they were. That’s what I have in my mind at the moment, to be ready when the time comes,” he said.

Ellinas is currently under contract with Porsche and part of the Lechner Racing team. In 2018 he won the Porsche Carrera Cup in the UK and last year he made two podiums in the Porsche International series.

He is to date the only Cypriot to have driven a Formula One car, something he is obviously very proud of and that he considers his biggest achievement.
“In 2013, I tested for Marussia F1. This came on the back of a great season I had in Formula 3, as I won many races that year.

“Driving a Formula One car cannot be compared to anything else in professional car racing, it’s the very top, there’s nothing beyond that.
“There’s so much adrenaline, your reflexes and concentration need to at their absolute best. You are driving at over 300 kilometrss per hour, so you need to know every single detail on the car and learn to ‘feel it’, to predict its reactions. It was an unbelievable experience for me,” he said.

Like many other drivers, Ellinas’ career started in go-karting, a period he still remembers fondly.
“Go-karting was one of the happiest moments of my career. It is a stepping stone for everyone to start in go karting, to race in national championships and then to progress to European and international tournaments.

“If you show enough motivation and dedication, and if your results back you up, that seat is the perfect platform to launch your career in professional car racing.
“When I started, I obviously took it seriously, but I didn’t know it was going to lead me to professional car racing. I only started to think it as a career when I won my first international go karting competition at the age of 15, that was a defining moment for me.”

As his career quickly took off, so did the sponsors, always a fundamental element in a professional driver’s career. Ellinas, however, reckons the economic aspect of the sport might have gone too far, especially as Formula One is concerned.

“Formula One today is very ‘political’. Drivers with big sponsorships behind them can get into the sport more easily than other ones with possibly more talent but with less to bring to the table in terms of money.

“There are so many drivers who deserve a chance in Formula One, but they are not there because they are not backed by big sponsors. It became all about money.”
“Until not even that long ago, drivers were given a chance in Formula One thanks to their raw abilities and performances on the track. That’s how people like Lewis Hamilton, Fernando Alonso and Kimi Raikkonen got into the sport, they were given the chance thanks to their talent.

“Nowadays, despite there still being talented drivers around like Max Verstappen or Charles Leclerc, you see the likes of Lance Stroll or Sergio Perez, who, in my opinion, got into Formula One mainly because of the sponsors they attracted.

“If you think about it, they only raced in minor series for two or three years before they were given a seat, this is not normal.”

When asked about who the best driver at the moment is, however, Ellinas has no doubts whatsoever.
“Hamilton is still at the top of his game. He has it all and is undeniably one of the best ever drivers in history. But for me, the future belongs to Verstappen and Leclerc, who have shown they are already prepared to fight for the championship.”

About the possibility of ever going back to Formula One, Ellinas remains realistic and said the chances of doing so are now relatively small. Nevertheless, he said he does not have any regrets regarding his career.

“Three years ago, I made the switch from Formula racing to GT racing and I can say I’m very happy with where I am now.
“That being said, everything is possible. In the future, should I have the chance to go back to Formula racing, like Formula E for example, I will definitely consider it.”

Ellinas also spoke about the difficulty in making it to the top in the car racing world when coming from a small country like Cyprus.
“It is extremely difficult to emerge internationally in professional car racing when you come from Cyprus, mainly because of the lack of adequate infrastructure on the island.

“We only have one circuit here, the Daytona Raceway in Nicosia, as opposed to other countries such as France, Germany, Italy, where there are plenty.
“A driver needs to practice on different tracks all the time, try new techniques and drive under different conditions in order to improve his skills. Otherwise, it becomes monotonous and ultimately unproductive.

“That is why it is difficult for a Cypriot driver to make it on the international stage. But I’m confident that eventually it will happen and some young driver’s dream will come true, just like it happened to me.”

Arsenal not haunted by Europa loss to Chelsea, says Arteta