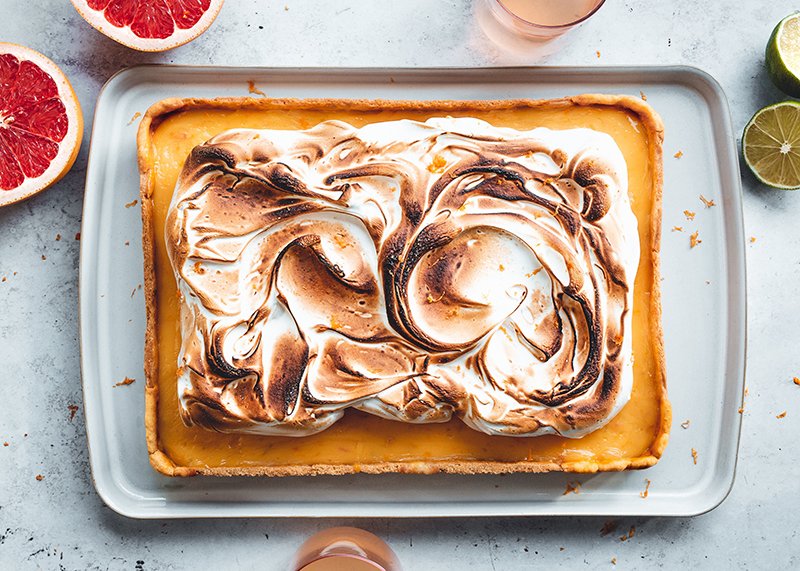 If you could have been stuck in any household over the past few months, Edd Kimber’s would’ve made a very lovely haven.

Baker, food writer and blogger Kimber (theboywhobakes.co.uk) has been deluged in cake. Any hint of a sweet craving and he can just “pop into the kitchen, because there’s 17 different things I could have,” he casually points out.

Bradford-born Kimber has been baking professionally for a decade now, since winning the first ever series of Great British Bake Off back in 2010.

Most food writers or bakers, he says, overestimate what home bakers have in their cupboards – and so his latest cookbook, One Tin Bakes, only requires either a short rummage for a single version of the classic and ever popular brownie pan, or a small investment in one.

As we speak, Kimber has a tin of the book’s tahini babka buns (“A modern take on a cinnamon bun”) in the oven, and is just as regularly found cooking up a batch of his turtle brownies (a rye brownie with caramel, pecans and dark chocolate), or the oatmeal raisin cookie bar with a caramelised white chocolate ganache on top. One Tin Bakes also features rather grand treats, like a giant Portuguese custard tart, a slab of an Eccles cake, and entire tray of burnt Basque cheesecake.

For someone whose life revolves so much around home baking, how exactly does he feel about shop-bought cake? “Sometimes there’s nothing wrong with those because they have a real nostalgia factor. It’s what we all had growing up,” he says with feeling.

“I often make my own birthday cake, which is incredibly sad and also controlling,” he says with a laugh. “I’m a baker! So I know what I like! If I wanted it, my partner would definitely make one for me, but it’s one of the few times I get to bake just for me.”

Kimber grew up baking mince pies and scones with his mum, and those scones are still “one of the things that I don’t even think about making, I just do”, and he hopes One Tin Bakes can exist as a similarly ongoing and enduring guide for bakers.

“Say this is the first baking book you ever buy, you will be able to bake from it for years as you get better and better and better, and youre willing to try harder and harder things,” he says, enthused. “I like books to be able to live with you for a long time.”

For the custard filling

For the meringue topping

1/4tsp grapefruit (or other citrus) bitters

For the pastry case

Lightly grease the tin and line the base with parchment paper.

Carefully drape the pastry into the baking tin, gently pressing it into the corners and up the sides. Trim off the top edges then blind bake for 25 minutes, then bake for a further 10 minutes or until the base is set. Set aside.

To make the custard filling, place the caster sugar and cornflour into a large saucepan and whisk to combine. Add the remaining ingredients, except the butter, and whisk to combine. Cook over a medium-high heat, whisking constantly, until the mixture comes to a simmer, then cook for a further two minutes until thick. Remove from the heat, stir through the butter until melted and smooth, then pour the custard into the baked tart case. Press a sheet of cling film on to the surface of the custard to prevent a skin from forming. Leave at room temperature for an hour, then transfer to the refrigerator for at least four hours.

For the meringue topping, place the egg whites, sugar and cream of tartar into a large, heatproof bowl set over a pan of simmering water and whisk until the sugar has dissolved. You can tell when this mixture is ready by rubbing a little between your fingers. If it feels smooth it is ready, if you feel grains of sugar cook for longer. Remove the bowl from the heat and, using an electric mixer, whisk until the meringue is stiff and glossy. Add the vanilla and bitters and whisk briefly to combine. Scrape the meringue on to the tart and spread evenly over the filling. Using a blowtorch or under a preheated hot grill, burnish the meringue until toasted.

One Tin Bakes by Edd Kimber is available now

Actors no one wants to work with