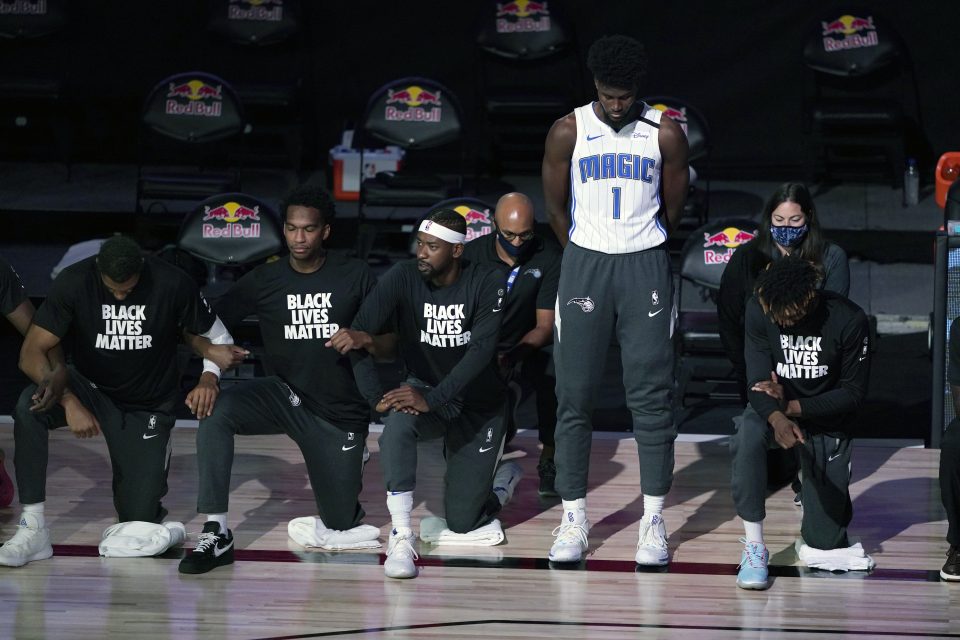 Orlando Magic forward Jonathan Isaac, an ordained minister, became the first NBA player not to kneel during the national anthem since the league restarted play Thursday near Orlando.

Isaac, who is Black, also was the first NBA player not to don a Black Lives Matter shirt during the playing of “The Star-Spangled Banner.” Ahead of the Magic’s 128-118 victory over the Brooklyn Nets, Isaac stood amid his kneeling teammates while wearing his No. 1 Orlando uniform top.

Ahead of one of the later games Friday, San Antonio Spurs head coach Gregg Popovich and assistant coach Becky Hammon both stood for the anthem. Both Popovich and Hammon wore Black Lives Matters shirts.

On Thursday, all players and coaches for the New Orleans Pelicans, Utah Jazz, Los Angeles Lakers and Los Angeles Clippers had kneeled for the anthem.

“We all fall short of God’s glory, and at the end of the day, whoever will humble themselves and seek God and repent their sins, then we could see our mistakes and people’s mistakes and people’s evil in a different light, and that it would help bring us closer together and get past skin color, get past anything that’s on the surface that doesn’t really deal with the hearts of men and women.”

Magic coach Steve Clifford said of Isaac standing, “That’s a personal decision. We’re all supporting each other in this, and if guys are not comfortable kneeling and they want to stand, nobody has a problem with that. I support him. His teammates support him. The organization supports him. That’s part of living in our country.”

Isaac scored 16 points on 6-of-7 shooting and grabbed six rebounds in the Magic’s win. The 22-year-old Florida State product is averaging 12.1 points and 6.9 rebounds in 33 games this season.

Popovich said of his reasons for standing, “I prefer to keep that to myself. Everybody has to make a personal decision. The league has been great about that. Everybody has the freedom to react any way that they want. For whatever reasons that I have, I reacted the way I wanted to.”

He added, “Considering what’s going on in our country with race, it’s always been our national sin and it’s always been something that has never been faced as well as it should have been. And with the events that we’ve all witnessed in this last year, it’s just logical and wise to keep that momentum going … because it is a national embarrassment. It keeps us from being the country that we should be or the country that was promised to everyone.

“And nothing could be more poignant than to have all of the teams here all committed to making statements and letting it be known that this has got to change and not just a little bit.”

Spurs guard DeMar DeRozan was asked his thoughts about his coach and assistant coach not taking a knee for the anthem.

DeRozan said, “(Their decision to stand was) out of a positive side of their heart. Same way we kneel. Don’t take away nothing from those guys. …

“You know Pop speaks out. When it comes to Becky, she’s been (on the) front line, fighting for equality since I’ve been a fan of hers playing in the WNBA. So everybody has their own right of making a statement and you can’t vilify nobody for not doing what the other group is doing. I’m all for it.”

A minute with Axinia Nazari Flexibility coach and an amateur contortionist