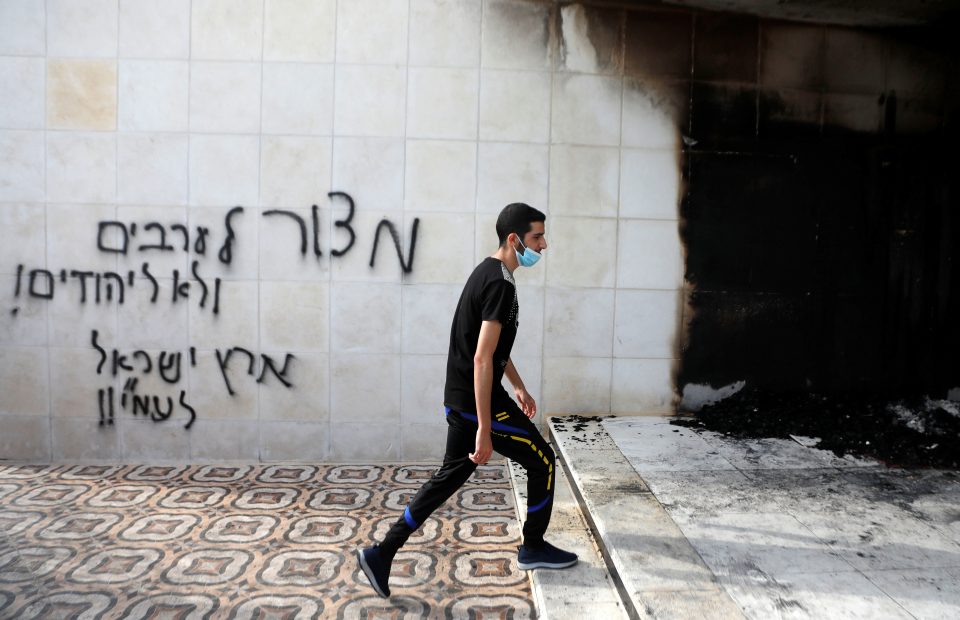 A Palestinian man walks past a Hebrew slogan reading "a siege for Arabs, not for Jews! the Land of Israel for the People of Israel" after a mosque section was set on fire, in Al-Bireh in the Israeli-occupied West Bank July 27, 2020. REUTERS/Mohamad Torokman

ON July 4, 2020, the Israeli ambassador, His Excellency, Mr Sammy Revel, wrote an open letter in the Cyprus Mail addressed to an imaginary Cypriot friend calling on Cyprus to distance itself from the UN Committee on the Exercise of the Inalienable Rights of the Palestinian People (CEIRPP), whose sole purpose was to disseminate anti-Israeli propaganda.

The ambassador referred to CEIRPP as the “so called UN Palestinian committee” but did not deconstruct its acronym for the benefit of readers. So far as I have been able to discover the committee’s activities are primarily directed at preventing Israel’s annexation of the West Bank.

What aroused Sammy Revel’s ire and hurt him most was that CEIRPP compared the Palestinian struggle against Israel to the fight against coronavirus.

I have no reason to disbelieve him and if

true the comparison of Israel to a virus is disgraceful and an example of anti-Semitic rhetoric that some critics of Israel are unable to resist.

Language is very important in international relations and adversaries should use language with circumspection.

Quite apart from being anti-Semitic it also smacked of ingratitude, given the medical assistance Israel has provided the Palestinians during the pandemic.

Like Israel’s ambassador at the UN in a recent interview on BBC World Service, Mr Revel was seeking to justify the proposed annexation of what Israelis of that ilk call by its biblical name of Judea and Samaria. His reference to the “birthplace of the Jewish people that shaped their spiritual, religious and political identity” was a clear reference to the West Bank.

What both ambassadors seem to be claiming is that the right of the Jewish people to a homeland is a right to recreate a national home on land that was historically connected with the Jewish people before the diaspora. They claim that this right is equal if not superior to the right of self-determination claimed by the Palestinians – and that it trumps international law that holds the West Bank to be illegally occupied territory.

He repeated an assessment made by Israel’s famous foreign minister Abba Eban that “the Arabs never miss an opportunity to miss an opportunity” to justify Israel’s intention to annex parts of the West Bank, as proposed in President Trump’s plan for Israel-Palestine, which the Palestinians rejected.

Reading between the lines what ambassador Revel implied in his letter was that in rejecting President Trump’s plan that gives Israel parts of the West Bank in return for a patchwork quasi-state, the Palestinians are missing yet another opportunity.

It was a cheeky letter to write to a Cypriot friend given that if Israel annexes the West Bank with America’s blessing it might set a precedent and encourage Turkey to do the same in northern Cyprus.

What fools must the ambassador think the men and women at the Cyprus foreign ministry are to fall for supporting Israel in the corridors of power at the UN and the EU in its plan to annex the West Bank?

In the process of researching Cyprus’ involvement with CEIRPP I hit upon a statement made by Cyprus as long ago as April 1976. Her participation in CEIRPP was said to be in support of the Palestinian people in the exercise of their inalienable right to self-determination and the return to their homes from which they were uprooted and displaced by the 1967 war.

The statement went on to say that when Israel invaded Palestinian territory it was not in order to expel the indigenous population and introduce racial colonisation, and that a few Jewish settlements did not justify changing the demographic character of Palestinian territory.

The similarities with the position in Cyprus are striking. Turkey’s justification for invading Cyprus in 1974 was to prevent union with Greece, protect the Turkish Cypriots in the process and uphold the 1960 constitution of RoC.

It was neither to partition nor annex any part of Cyprus which is expressly prohibited by the 1960 treaties establishing RoC pursuant to which Turkey claimed she had acted.

And just like Israel has now moved to a policy of annexing Parts of the West Bank, Turkey may be tempted to do the same in Cyprus. So it is a big ask to make of the RoC to support Israel in its annexation plans and the ambassador showed remarkable chutzpah – a nice Yiddish word – to ask for Cypriot support even if elliptically.

I prefer the policy of Ms Tzipi Livni who served as Israeli foreign minister a few years ago and negotiated at length with the Palestinians, and who believes that a compromise based on respect for the Palestinian case, in place of President Trump’s one sided plan, is feasible.

She has experience and pedigree and should be Israeli prime minister but for the complexities of the Israeli political system.

Ms Livni reminds me of the daughter of the Israeli ambassador in Cyprus who was at the English School between 1965-67 and was popular with everybody including a couple of Palestinian students.

1967 was the year of the six-day war when the Israeli Defence Forces under Mose Dayan defeated the armies of Egypt, Syria and Jordan in six days capturing the occupied territories and East Jerusalem in furtherance of Israel’s right to exist, denied her by those states.

But Israel’s right to exist is not a right that exists in a vacuum. It is a right to exist in peace with its neighbours, which must include a viable and friendly Palestinian state rather than a permanently disgruntled patchwork quasi state.

It’s not perpetrator against victim, it’s the state against the victim