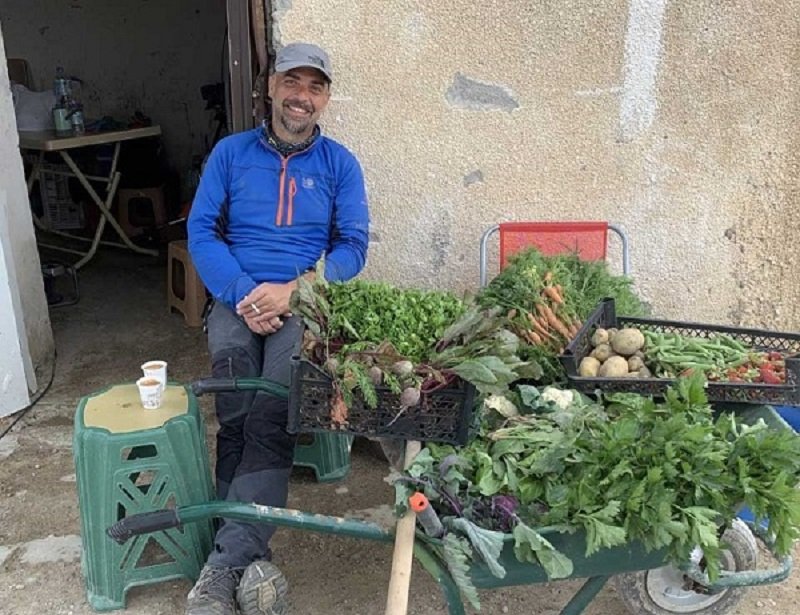 Erbay Akansoy, sitting outside the family home in Maratha, enjoying the first harvest in 46 years

I am a citizen of a country

In which people were slaughtered solely for their ideological leanings by so-called patriots in the name of protecting the state and nation,

Where those who trampled on human dignity were declared heroes, their names given to streets,

Where people without a hint of sorrow say of the homes and lands of others, “It’s mine now.”

I AM part of a divided island

Where the scales of justice have lost their orientation,

Where great generals deliberately sent young people to the slaughter over their ideologies,

Where languages were forbidden to be spoken and village names changed.

BUT I am also part of an island of people

Who fight with all their strength for the reunification of my home,

Who oppose injustice and pour their sweat over this soil for a fair society, for a common country,

Who stand against injustice, and with a free spirit, show their true appreciation for the island and its people, not only with words but actions too.

Over the last year, I’ve been going to Maratha often, the village of my father and his family. A village in ruins that has been lost over time. The hot dry air of the Mesaoria plain scorches everything, as if exemplifying history, wanting to leave nothing alive. We younger generations are not used to the soil and the heat. The mudbrick house where my father was born in 1956 is on the verge of collapse. “We will defy death, we will make it live,” says my father. And the words of Nazim Hikmet flow from his mouth…

Living is no laughing matter:

you must live with great seriousness

I mean without looking for something beyond and above living,

I mean living must be your whole occupation.

Living is no laughing matter:

you must take it seriously,

so much so and to such a degree

that, for example, your hands tied behind your back,

your back to the wall,

or else in a laboratory

in your white coat and safety glasses,

you can die for people—

even for people whose faces you’ve never seen,

even though you know living

is the most real, the most beautiful thing.

I mean, you must take living so seriously

that even at seventy, for example, you’ll plant olive trees—

and not for your children, either,

but because although you fear death you don’t believe it,

because living, I mean, weighs heavier.*

After planting the olive trees, Maratha greets us with a different air. A cool air blows from its plains.

He shows us one by one the holes in the caves dug by his brothers… my uncles. He points to the places where his sisters, my aunties, played; where his mother, my grandmother, boiled the milk and prepared the halloumi. He shows us the ruins of his grandmother’s house which opens out on to the common yard, and the trees planted by his uncle and his cousins.

Suddenly, a dark shadow is cast across the face of this spirited man who moments earlier felt young again.

And I ask him: “What happened Dad? Did you think of them again?”

“No,” he says, smiling, “They never left my mind. I just can’t stop thinking about this roof.”

I tell him immediately, “Don’t worry baba. We’ll fix it, we’ll get it replaced.”

And he replies, “That’s what I’m sad about, I don’t want us to disturb the pigeons…”

We must never again allow harm to come to Kika, Maria, Andreas, Sibel, Erbay, Mustafa, Sezin and all the other children, the young and the old whose names I have not mentioned.

Never again can we allow ourselves to forget: When you kill children, you destroy the infinite possibilities of hope, talent, happiness and humanity.

Erbay Akansoy is a member of the bicommunal organisation of relatives of missing persons ‘Together We Can’, created by people who continue to fight against the nationalism, violation of rights, repression, hegemony, and every form of racism and discrimination they experienced on this island. They are guided by the principle of never allowing hope, life and humanity to die.

Globalisation is down but not out

Virus-induced economic challenges not the only ones