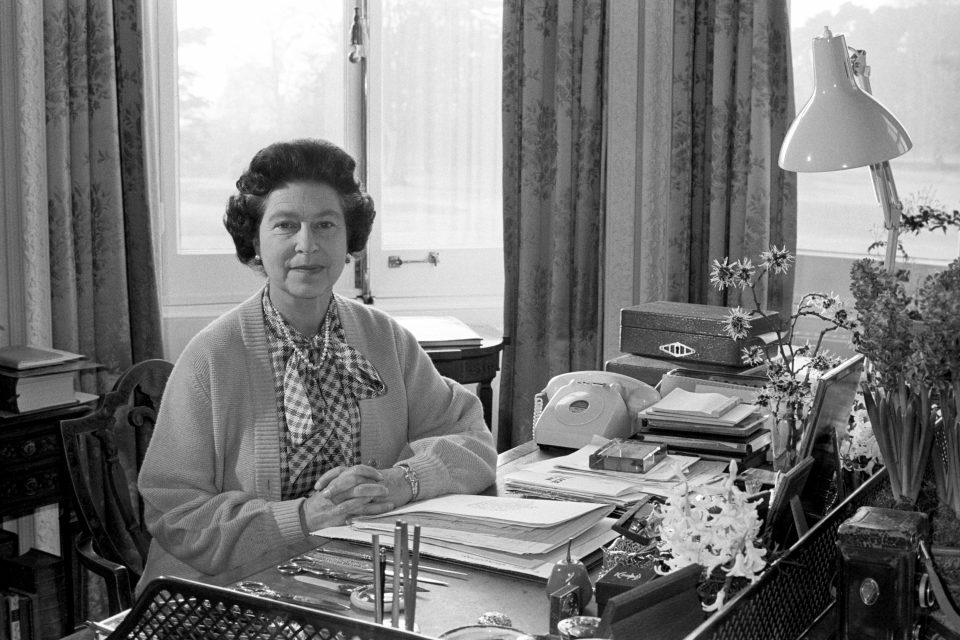 Queen Elizabeth II, at her desk in the study of Sandringham House, her Norfolk home, where she marked her 30th anniversary of her accession to the throne in 1982 . Ron Bell/PA Photos.

To mark the release of her new album Folklore and first single Cardigan, Taylor Swift took the unusual step of selling an actual cardigan alongside more traditional merchandise, like hoodies and T-shirts.

A replica of the one Swift wears in her Cardigan video – a thick cable knit V-neck sweater in cream with black stripe edging, that has three stars on each sleeve – has already sold out on the singer’s online store.

Famous fans including actor Jesse Tyler Ferguson and Kobe Bryant’s daughter Natalia have posted photos on Instagram wearing the cardigans, they’d been gifted by the singer.

It’s surprising to see such a wintry garment gaining popularity in summer, but the cardigan has a way of popping back into fashion just when it seems to have gone for good,.
From its earliest origins to the present day, here some of the faces who have helped make the cardigan famous…

7th Earl of Cardigan
The knitted sweater takes its name from the 7th Earl of Cardigan, James Thomas Brudenell, a lieutenant general in the British army. Lord Cardigan, famous for leading the Charge of the Light Brigade during the Crimean War, was known for wearing a short, woollen sleeveless waistcoat to keep warm during the failed offensive in the 1800s. It is thought to have been trimmed in fur.
After the war, the practical knitwear item reportedly became rather popular outside the military, and cardigans began to be widely produced.

Coco Chanel
Credited with popularising cardigans for women in the 1920s, it’s said that French fashion designer Gabrielle ‘Coco’ Chanel preferred a button-down sweater because she didn’t like the way traditional pullovers messed up her hair when she put them on.
Inspired by the legendary designer’s early work, cardigans and knitted jackets are still seen on the Chanel catwalk and in boutiques today.

Queen Elizabeth II
While the Queen favours brightly coloured coat dresses for formal occasions, when it comes to off-duty style, Her Majesty is all about cardigans.
Usually teaming a blouse and pleated skirt with a loose, open cardigan in a muted hue, the Queen has been pictured in button-down sweaters for decades, most recently when the monarch met her newest great grandchild, Archie.

Kurt Cobain
At the other end of the style spectrum, rock icon Kurt Cobain introduced a whole new generation to the cardigan in the Nineties. The Nirvana frontman took an item of clothing usually seen on grannies and grandpas and made it cool, wearing moth-eaten chunky knits with band T-shirts and battered jeans.
One of the singer’s most famous cardigans, worn for the band’s 1993 MTV Unplugged gig, sold at auction for $334,000.

Michelle Obama
Preppy, fine-knit cardigans from brands like J. Crew were a mainstay in Michelle Obama’s wardrobe as First Lady, reportedly leading to a spike in sales as fans sought to emulate her elegant style.
On the night Barack Obama was elected as President in 2008, the First Lady wore a black cardigan over her red and black Narciso Rodriguez dress.

Taylor Swift
Now, with the release of Folklore, Taylor Swift has put the cardigan back on the map once more.
Given the pop star’s huge reach (she has 137.5 million followers on Instagram) we predict we’ll be seeing more cosy cardis in the shops once autumn rolls round.