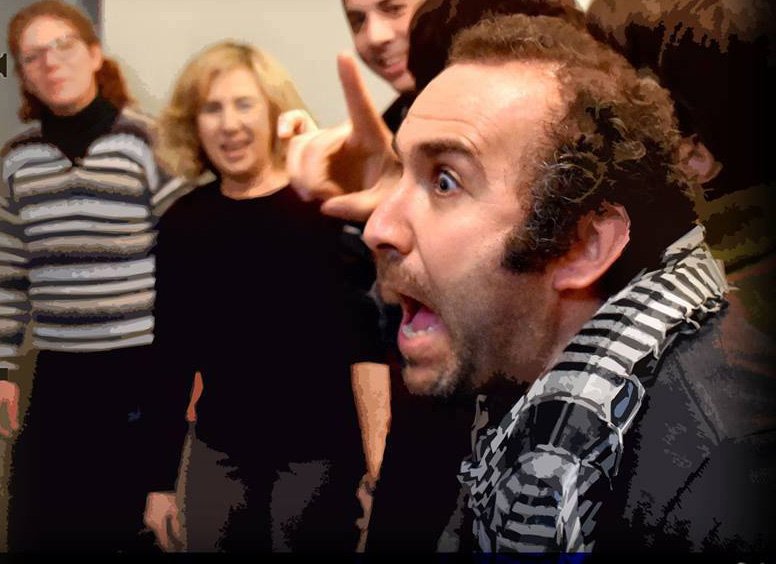 The world of acting is colourful one, with no firm borders. Rules, they say, are made to be broken and when in it comes to acting, being playful and able to respond on the spot are key factors. Especially so in the world of improv theatre – improvisation theatre. You could say it’s ‘acting on the go’ with no form of preparation or experience needed. There’s no ‘camera, lights, action’ cue nor a script to follow. Sometimes, the only direction improvisors have is a location setting given to them by the audience. That was the case for me when I attended an improv theatre class with the Nudniks group in Nicosia.

At 7pm on a Monday afternoon the Nudniks gather for their weekly class. I walked over the grass at Acropolis Park to find them. They were easy to spot. A colourful bunch of all nationalities and ages talking loudly and laying down yoga mats to sit on.

They key figure in the group is actor and improv teacher Mohammed Awwad, a Palestinian who’s love affair with Cyprus started a decade ago when he first moved here. In addition to being an actor, he is also an entertainer and a clown educator offering psychological support to children with cancer.

Mo, as he is better known, is also a YouTuber, creating comedy sketches inspired by the social and cultural life of Cyprus. Growing up in the Middle East, he also uses his videos to bridge the Arab and Cypriot cultures and establish a connection through comedy. When he’s not filming or wearing his clown shoes, he teaches improv theatre.

I was surprised to find no professional actors in the group but as Mo explained the beauty of improv theatre is that anyone can take part. “The class,” he said, “is for whoever seeks laughter and courage to stand in front of the public. Students of Nudniks actually come from all aspects of life, we have teachers, school and university students, engineers, bank employees, dancers, social workers and many others from all career spectrums. They join to approach their non-formal side and unleash the funny human from within.”

Improvisors – as improv theatre participants are called – have to build up a scene with no written script or planned rehearsal. They are taught how to be spontaneous and to react to the audience’s suggestions performing a scene with zero preparation. The class builds up to this gradually. 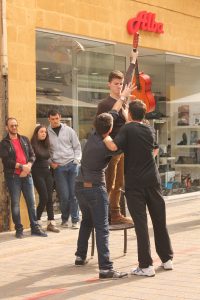 The session started with physical warm ups to get the blood flowing, the energy rising and the day’s thoughts left behind. We moved into facial expressions and quick exercises to encourage silliness and break the ice. The fast pace of the activities leaves no time to reflect if you look or sound silly, you have to act on the go. Although mostly between strangers, except for the returning students, the atmosphere felt safe and relaxed.

Mohammed’s thoughtful stance combined with his naturally comic commentary creates an easy-going environment. The class developed into short, two-line scenes. Two actors, acting on impulse, were to take the stage – the two chairs on the grass – and come up with a two-sentence conversation. Our only directions were to reply with an interesting statement rather than a question. Then, the guidelines advanced with Mo creatively changing the direction every so often.

The essence of the exercises is to think fast and creatively. It isn’t about giving a smart answer or a witty comment. We were encouraged to come up with start-up lines that could be foundations for scenes and be unconventional. Something you would say in real life or that would help advance a scene, rather than focus on what makes good comedy.

“Improv theatre sees failure as a wonderful opportunity,” said Justyna Ataman who’s been attending classes since 2019, “it does not discriminate, judge, put labels, nor limit. It takes you out of the comfort zone of familiarity and suddenly places you in a new, unexpected situation.”

When you release unfiltered thoughts, countless tales can develop. “It is unbelievable how many stories and unexpected connections we hold in the back of our mind,” added Justyna. “When you allow yourself to roam freely and give yourself the permission to express, the creativity is endless!”

A lot of laughter was shared between the scenes. You had act quickly, leave your inner critic behind and essentially, just play along. The last phase of the class was to perform a long scene with a random partner with no plan in mind. The rest of the class, i.e. the audience, offered a location. As soon as that was established the scene started and the two actors had to work together and come up with an impromptu scene.

everyday life too. “I have only attended two classes,” said 22-year-old Mary Spyrou, “however improv in general has certainly helped me personally. I am quite the over-thinker and ironically the adrenaline rush of improv calms my overthinking mind. In improv you have to do what comes to mind in the moment or within the next few seconds, and this relieves my mind from stressing over a decision which has built up over time. The stress of improv is imminent, but temporary, and eventually the majority of it turns into energy.”

“Improvisation is built on conquering fears and working collaboratively in an accepting environment,” explained Mo, “skills that have a positive effect on those who acquire them, and skills that help break down barriers to communication, strengthening diversity and integration of communities in real life as well.” Essentially, it’s communicating mindfully, respecting who you have in front of you, paying attention to body language and all that is says and not being afraid of looking silly. All while enjoying the process.

“The beauty of the improv,” he added, “is that it teaches you to be spontaneous, comic and less judgmental about the choices you make. Instead, it gives people the space to think out of the box and bring up ideas that come in their minds at the moment.”

The Nudniks have been around since 2014, initially started by Dimis Michalidis and Aleen Andreou. Mo was asked to help with the teaching and carried a large portion of them until 2018. The following year Nudniks took a break as work and personal commitments took over yet in 2019 Mo was determined to revive it and with the help of Natasha der Avedissian, Nudniks was back on its feet.

What’s with the strange name? “It’s a Yiddish word,” Mo explained that means ‘the annoying people’ and was chosen to show ease, fun and out-of-the-norm performance. They meet once a week. In the summer at Acropolis Park and in the winter at a studio nearby.

Nudniks is currently the only active improv theatre group in Cyprus and Mo is passionate about bringing more people in to show them the wonders of being spontaneous, silly, listening before replying and conquering fears. He’s been on the lookout for another similar group since 2010 and should be find one he’ll be “happy to chase them until the end of the world.”