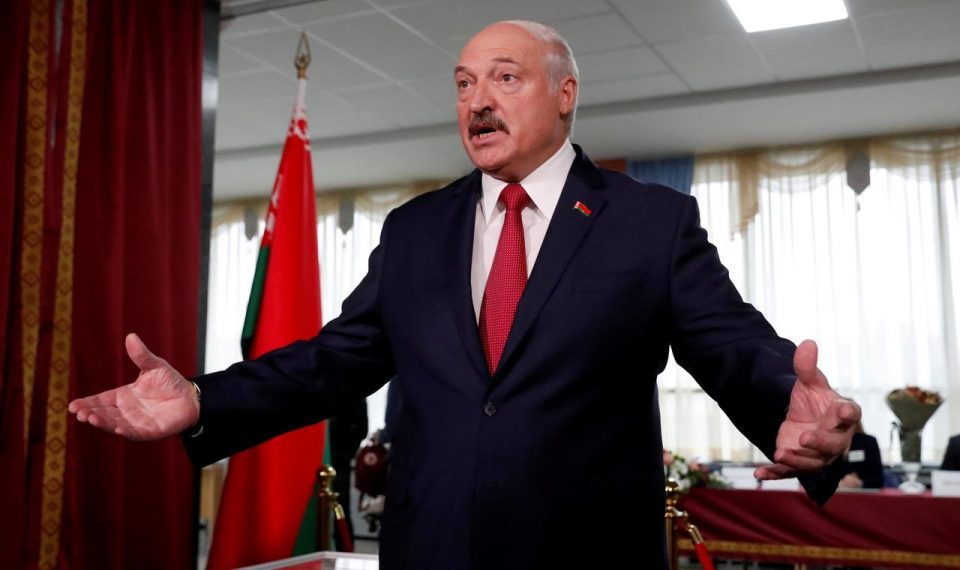 “Stop calling me a mustachioed cockroach,” said Alexander Lukashenko. “I am still the president of this country.” But that doesn’t sound very presidential, does it?

Lukashenko has been the president of Belarus for the past 26 years, and Sergei Tikhanovsky, the video blogger who called him that, is now in one of Lukashenko’s jails. But Tikhanovsky’s wife Svetlana is running for president in her husband’s place in next Sunday’s election (9 August), and she may do well enough to force ‘Europe’s last dictator’ into a second-round run-off vote.

Tikhanovsky struck a popular note when he called Lukashenko a mustachioed cockroach: his mustache is definitely the ‘Eastern European dictator circa 1936’ model, and like cockroaches, you just can’t get rid of him. The YouTube star adopted a bedroom slipper as his symbol (because Belarusians squash cockroaches with their slippers, presumably), and started driving around Minsk with a giant slipper on the roof of his car.

A dubious online poll claimed that Lukashenko would only get 3% support for the forthcoming election (seeking a sixth term), and graffiti and T-shirts saying ‘3%’ started appearing around town. Tikhanovsky took hope, declared he was running for president, and was arrested two days later – but suddenly Lukashenko looked vulnerable, and other serious candidates started coming out of the woodwork.

Former banker Viktor Babariko declared he was in the running, and was promptly jailed on fraud charges. Former  ambassador to the United States Valery Tsepkalo, founder of a high-tech business park, was denied registration as a candidate and sufficiently intimidated that he has taken refuge in Russia with his two children. But none of them has really dropped out.

Instead, three women have taken their places. Svetlana Tikhanovskaya is now the opposition candidate for the presidency, with the public support of Tsepkalo’s wife Veronika and Babariko’s representative Maria Kolesnikova. And while Tikhanovskaya is unlikely to get over 50% of the votes on Sunday, Lukashenko may also fall short (there are also three minor candidates running).

Then it would get really interesting, since in the second round Tikhanovskaya would inherit most of the minor candidates’ votes. She might even win, because compared to the other ‘hard’ regimes of Europe, Lukashenko doesn’t have a lot to work with.

He can’t rely on the nationalism that keeps Viktor Orban in power in Hungary. Belarus was never independent before 1991, having spent two centuries in the Polish-Lithuanian Commonwealth and another two in the Russia and Soviet empires. Belarusians don’t even hate or fear their neighbours.

Neither can Lukashenko rely on the religious fervour that reliably delivers half the popular vote to the hard-line Catholic party in Poland and to the hard-line Islamic party in Turkey. Belarusians are not particularly fervent; indeed, over 40% of them say they have no religion at all.

He has few successes to offer on the economic front: Belarus has barely half the per capita GDP of Russia on its eastern border, only a third of that of Poland to the west. He dismissed the Covid-19 pandemic as “psychosis”, promoted drinking vodka as a cure – and Belarus now has twice as many cases as Poland, although its population is only one-quarter the size.

Dictatorships that try to operate behind a facade of ‘free’ elections have to maintain a certain level not only of fear but also of competence, and Lukashenko’s credibility is starting to crumble. An anti-regime rally in Minsk on 19 July attracted around 10,000 people. A rally in the same city on 30 July, only 11 days later, attracted 63,000.

So he really could lose in a run-off election, unless there is massive vote-rigging – but then it would probably also get really violent, because Lukashenko has no intention of retiring at the tender age of 65. If he goes down, he will go down fighting.

He’s already laying the groundwork for that kind of repression. Last week his secret police raided a health spa and arrested 33 Russian ‘mercenaries, allegedly members of the Wagner group, who he claimed were planning terrorist attacks to disrupt the elections. There are another 200 of them still loose in the country and intent on terrorism, he claimed.

It’s nonsense, of course: Vladimir Putin doesn’t want other post-Soviet dictatorships to be overthrown by popular votes. The Russian mercenaries were probably just in (deniable) transit to Libya, Syria or Sudan, where they have lots of work. Lukashenko is spinning the terrorism tale to justify a violent crackdown on the opposition if it looks like it’s going to win.

Svetlana Tikhanovskaya is not demanding to become president if she wins. She just wants the 700 opposition supporters and activists arrested since May (according to the Belarus human rights group Vyasna) to be released, and then a truly free election. It’s not too much to ask.