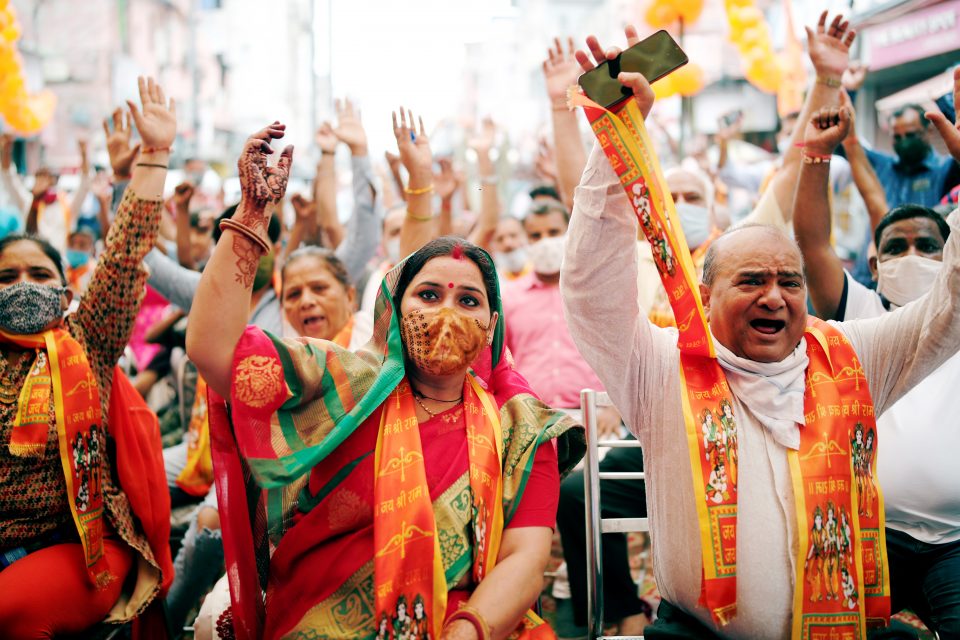 Prime Minister Narendra Modi on Wednesday launched the construction of a Hindu temple on a site that has been contested by Muslims for decades in a dispute that has sparked some of India’s most bloody communal violence.

The Supreme Court ruled last year that Hindus, who believe the site in the northern town of Ayodhya is the birthplace of Lord Ram, a physical incarnation of the Hindu god Vishnu, be allowed to build a temple there, ending years of litigation. .

Modi, whose Hindu nationalist Bharatiya Janata Party (BJP) campaigned for more than three decades for the temple, unveiled a plaque at the site in an elaborate ceremony to inaugurate construction.

“The whole country is thrilled, the wait of centuries is ending,” Modi said in a speech, after taking off a white mask that he wore as a novel coronavirus precaution.

“See the amazing power of Lord Ram. Buildings were destroyed, there was a lot of effort to eradicate his existence, but Ram remains in our mind even today.”

Hindus say the site was holy for them long before the Muslim Mughals, India’s most prominent Islamic rulers, built the Babri Mosque there in 1528.

Hindu protesters demolished the mosque in 1992, triggering riots in which about 2,000 people, most of them Muslim, were killed.

Many Muslims in Ayodhya have welcomed construction of the temple in the hope that it would end years of acrimony with Hindus and help bring economic growth but an influential Muslim group spoke out against it.

“Usurpation of the land by an unjust, oppressive, shameful and majority-appeasing judgment can’t change its status,” the All-India Muslim Personal Law Board said on Twitter.

“No need to be heartbroken. Situations don’t last forever.”

BRICKS OF GOLD AND SILVER

Many members of India’s Muslim minority saw last year’s court ruling awarding the site to Hindus as part of a pattern by the Hindu-nationalist government aimed at sidelining Muslims.

The government denies that.

Wednesday’s launch of construction came on the first anniversary of the scrapping by Modi’s government of special privileges for India’s only Muslim-majority state of Jammu and Kashmir, another highly contentious issue for Muslims.

The BJP had long called for disputed Kashmir’s special autonomy to be revoked. The government said the change was necessary to develop the strife-torn region and integrate it with the rest of India.

Before the launch of construction of the temple, Modi took part in Hindu rituals that included the chanting of Vedic mantras by saffron-clad priests to bless the site.

Security was tight in Ayodhya, 687 km (427 miles) southeast of the capital, New Delhi, as the sound of prayers filled its streets as devotees and monks thronged its ancient temples in celebration.

Event organisers gathered soil from more than 2,000 holy places and water from more than 100 rivers for use in prayers at the launch of building work. A Ram devotee from Tamil Nadu state donated two bricks, one of gold the other of silver.

But while Hindus celebrate, legal battles over the site are still not over.

Three former prominent BJP government ministers are facing trial on criminal conspiracy charges linked to speeches suspected of inciting the crowd that destroyed the old mosque in 1992. They deny the charges.

Open letter to the Cypriot government from a Lebanese/Cypriot citizen