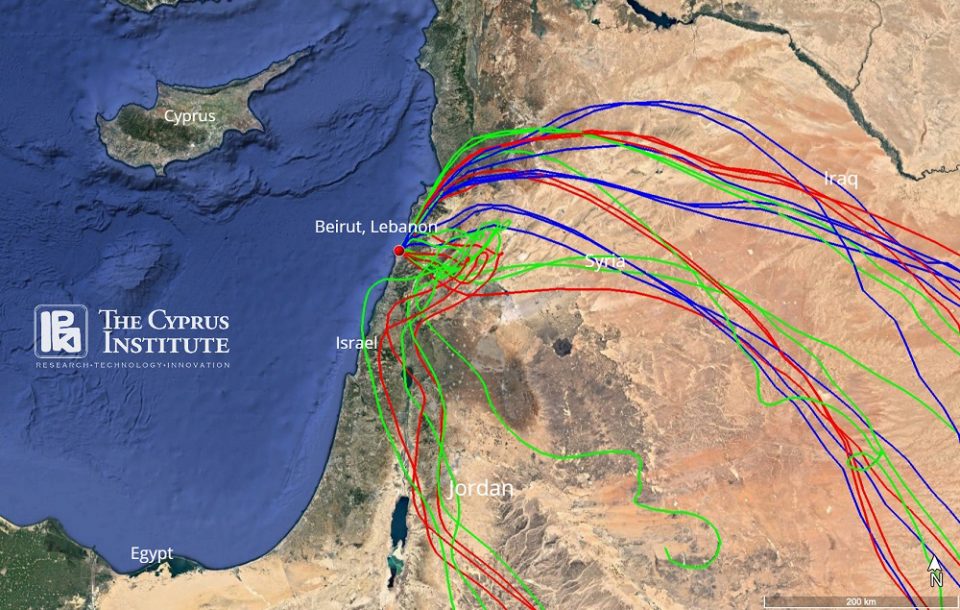 The toxic fumes emanating from the Beirut warehouse explosion are not blowing in Cyprus’ direction, experts have modelled.

Video footage of the fire prior to the explosion show white-grey smoke followed by an eerie plume of red-brown and finally a white mushroom cloud.

Experts from the Cyprus Institute have modelled that the air masses above the explosion site were transported to the East and South of Lebanon – towards Syria and Iraq – away from Cyprus.

There were concerns that the island may be in the path of the air masses, especially since the explosion was felt by many throughout Cyprus.

The modelled meteorological conditions, including wind speed and direction, were used to calculate air parcel trajectories for 72 hours after the explosion.

The work, carried out by the Environmental Predictions Department of the Cyprus Institute Climate and Atmosphere Research Centre, forecasts the potential atmospheric transport of the pollution.

The Cyprus Institute used similar models to track and forecast the potential atmospheric transport of pollution in Mari and Fukushima disasters.

It is understood that 2,750 tonnes of ammonium nitrate had been stored for six years at the port without safety measures.

“These indicate that the gasses released are white ammonium nitrate fumes, toxic, red/brown nitrous oxide and water,” said Stewart Walker from the school of Forensic, Environmental and Analytical Chemistry at Flinders University.

Tuesday’s blast has so far killed at least 137 people and injured 5,000 with rescuers still searching through the rubble for survivors.

Dozens are missing and up to a quarter of a million people were left without homes fit to live in after shockwaves smashed building facades, sucked furniture out into streets and shattered windows miles inland.

The next era of Architecture