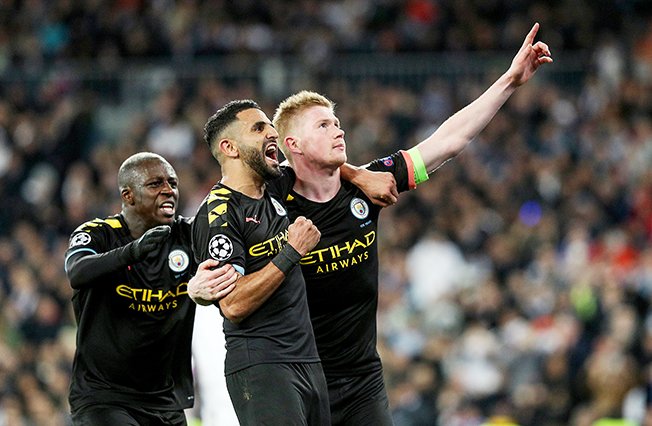 Much has changed since the first leg against Real Madrid in Spain on February 26, when City triumphed thanks to late goals from Gabriel Jesus and a Kevin De Bruyne penalty

Manchester City take a 2-1 lead into their Champions League last 16 match against Real Madrid at the Etihad Stadium on Friday but manager Pep Guardiola needs no reminders of how quickly games can turn in Europe’s elite competition.

In last year’s quarter-finals City went out on away goals to Tottenham Hotspur after looking in command when 4-2 up in the second leg.

The previous year, City were blitzed by three Liverpool goals inside 19 first-half minutes as they fell to a 5-1 aggregate defeat.

Guardiola’s first campaign with City in the Champions League ended in the last 16 when they threw away a 5-3 first-leg advantage over Monaco with a 3-1 defeat in the principality.

In each of those games there were periods when City lost their grip on the game, their possession football and attacking creativity undone by sloppy defending and a loss of focus.

“This competition punishes you a lot,” Guardiola told a news conference on Thursday.
“We know it, we have spoken about that the last years and we know it. If we want to make a step forward as a team to be close to winning this competition we have to be better in this area,” he said.

Much has changed since the first leg against Real on February 26, when City triumphed thanks to late goals from Gabriel Jesus and a Kevin De Bruyne penalty.

Zinedine Zidane’s side came back after the lockdown to clinch the Spanish league title with a run of 10 straight wins and they have had time to recover after drawing their final game of the season at Leganes on July 19.

Guardiola and his team studied Real, record 13-time European champions, closely during their domestic return but the former Barcelona manager isn’t sure that will help him a great deal.

“When you think that you’ve got one of Zidane’s tactical plans covered he’ll hit you with another or revert. It is already very difficult to analyse tactics. In the dim and distant past we played the first leg and what we can remember from that we will put to good use,” he said.

“Since then, we’ve watched all Madrid’s games since La Liga restarted so we’ve spoken about how we think Madrid might approach this game, but what we have done more is speak as a squad about how we can hurt Madrid and cause problems for them. That is what we’ve been focusing on in the build-up to this game,” he said.

Guardiola was giving little away but hinted his side are unlikely to adopt a cautious approach to defending their lead.
“We want to impose our own style, whether we are defending or playing on the counter or Madrid are countering. We want to take the game to certain areas of the field where we can hurt Madrid and show the qualities of our players”.

Real forward Gareth Bale meanwhile has been left out of their 24-man Champions League squad, casting doubt on his future at the club.
Bale, 31, last played for Real in June when they beat Mallorca 2-0 and did not feature in their final seven league matches as he watched on from the bench.

Bale, who has scored over 100 goals for the Spanish side since his record-breaking move in 2013, has endured his worst season at the club with only three goals in all competitions.

Midfielder James Rodriguez has not been called up either by Zidane while forward Mariano Diaz will miss the trip after he tested positive for Covid-19 last week.
Real skipper Sergio Ramos is ineligible after he was sent off in the first leg.