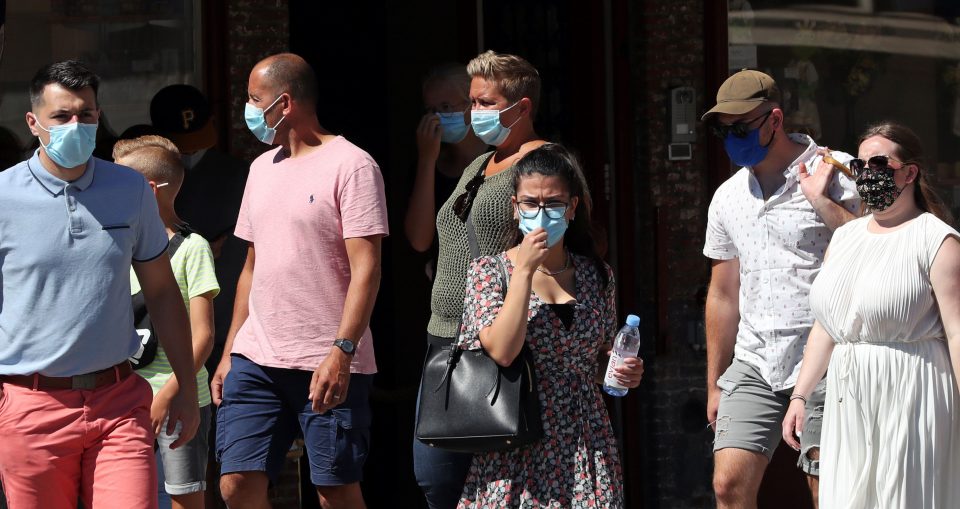 First there was acne, the scourge of our teenage years. Then there was macne, or male acne, the breakouts which plague sweaty, hairy backs. And now? Well, corona has brought us a new and troubling skin predicament: maskne.

Over the past few months, masks have gone from the purview of medical professionals to a base necessity. Back in March, Venezuela was among the first to impose the mandatory use of face masks in public, closely followed by Vietnam. On March 18, the Czech Republic became the first European nation to impose similar restrictions, and Slovakia quickly followed suit. To date, more than 50 nations require their citizens to cover their faces when out in public: amongst the latest are France, which enforced mask-wearing in enclosed public spaces from July 20; and Greece which, from July 29, responded to spiking figures by adding public transport, retail shops, offices, banks, food stores and bakeries (though not yet churches!) to the list of places in which masks must be worn.

In Cyprus too, as of midnight July 31, the wearing of masks in indoor public places has become compulsory. This is great for our continued safety. But not so great for those who are prone to maskne, or acne caused by face masks…

While acne is often the result of raging teenage hormones, it can also strike later in life as result of hormonal imbalance, excess oil production, clogged hair follicles and dead skin cells, or a build-up of bacteria. But it’s also known to be caused by diet and stress (consider the amount of tension-relieving chocolate you’ve consumed over the last few months and you get the idea!), along with friction, pressure and rubbing, and the over-growth of bacteria which come with the creation of a humid micro environment. In other words, prolonged mask-wearing is the perfect storm!

In dermatological circles, maskne is referred to as acne mechanica, and it was once most common amongst athletes – people who sweated profusely into their protective headgear and form-fitting clothing. But today, it’s a condition that’s rife the world over. Particularly affected are those who work in the public sector, especially healthcare workers who are required to wear tight-fitting masks for most of the day.

“When you’re in a mask all day, there’s an inevitable effect,” says 41-year-old Stella Green, who works as an administrative assistant in a local clinic. “Although I don’t get full-blown maskne, I’ve certainly noticed a nasty rash on my cheeks, exactly where the mask rubs my face the most. I have very dry, sensitive skin and I’ve always had to use products, chemical-free facewash and phthalate-free bodywash, both of which were recommended by a dermatologist. But even careful cleansing two or three times a day doesn’t clear the build-up of bacteria. In fact, the only thing which seems to help is using an oil-free moisturiser – you think it would be counter-intuitive, but it builds a healthy barrier between mask and skin.”

Maria Demetriou, who works in the service sector, also suffers from maskne, brought on by masked, eight-hour shifts. “It took me weeks to work out what the problem was,” says the 23-year-old. “I’ve always had pretty oily skin, and as a teenager, I suffered from acne. But that had cleared up completely with medication, and I thought the new break-outs were merely the result of corona-related stress.”

It wasn’t till Maria realised that a number of her colleagues were also suffering from nasty pimples around the chin and jawline that she put two and two together. “We’re all wearing masks for eight hours a day, in a hot, humid environment. And on our days off, we’re applying sunblock to protect against the summer sun, which doesn’t help. I never used to wear foundation,” she adds, “but now I kind of have to, to hide the spots. It’s a vicious circle.”

While cosmetics may effect a temporary solution (mainly for women), they’re certainly not going to help in the long-run, says Nicosia-based dermatologist Dr Konstantinos Symeonidis of SkinLab Dermatology and Cosmetic Clinic, and the General Secretary of the Cyprus Dermatological & Venereological Society.

“Make-up can cause a lot of skin issues, especially when one is constantly wearing a face mask,” says Symeonidis. “Wearing a sunscreen, cream, and make-up every day clogs the pores and exacerbates any dermatological problems. I tend to suggest that my patients stick to a simple, non-oily tinted moisturiser with a built-in sunblock.”

Over the last few months, Symeonidis has seen an uptick in patients with mask-related skin issues, including folliculitis, inflamed pimples, pain and itching, and even the odd allergic reaction – all of which fall under the maskne umbrella. “When you’re wearing a mask for long periods of time, you’re raising the temperature of your skin, your pores sweat more than usual, and bacteria increase. Stress can also contribute to the problem,” he adds. “We’ve treated a number of patients with corona-related skin conditions, many of which start with stress – or the overuse of hand sanitisers and repeated hand-washing – including alopecia, pruritus and eczema.”

It’s maskne, however, which is the most current skin issue, and Symeonidis always recommends that masks are changed regularly, and thoroughly cleaned or sprayed with an antiseptic where possible. “It’s very important,” he adds, “not to let sweat stay on your mask; what you’re aiming for here is the prevention of infection and allergic reaction.”

If you’re already suffering from the adverse effects of prolonged mask-wearing, Symeonidis advocates the use of an antiseptic facewash. “It’s best to consult your dermatologist about what formula works for your skin,” he explains. “But an antiseptic solution used on the face two or three times a day – no more, or you will see inverse results – should help with maskne.”

Given the current – and ongoing! – importance of covering one’s face, maskne looks set to become a major skin issue. If you’re fortunate enough to work from home, or in a socially-distanced office, it’s unlikely you’ll be suffering. But for those like Stella and Maria who work in a public environment, maskne is becoming a real problem. In fact, it’s become so common that the term now merits its very own entry in the Urban Dictionary, where ‘maskne’ is defined as ‘Acne produced by wearing face masks’.

But perhaps the most revealing piece of information is the sample usage sentence which accompanies the Dictionary’s definition: ‘Yeah, I’m an essential worker too,’ it runs. ‘I appreciate the pay but I don’t enjoy the maskne after a 10-hour shift’!