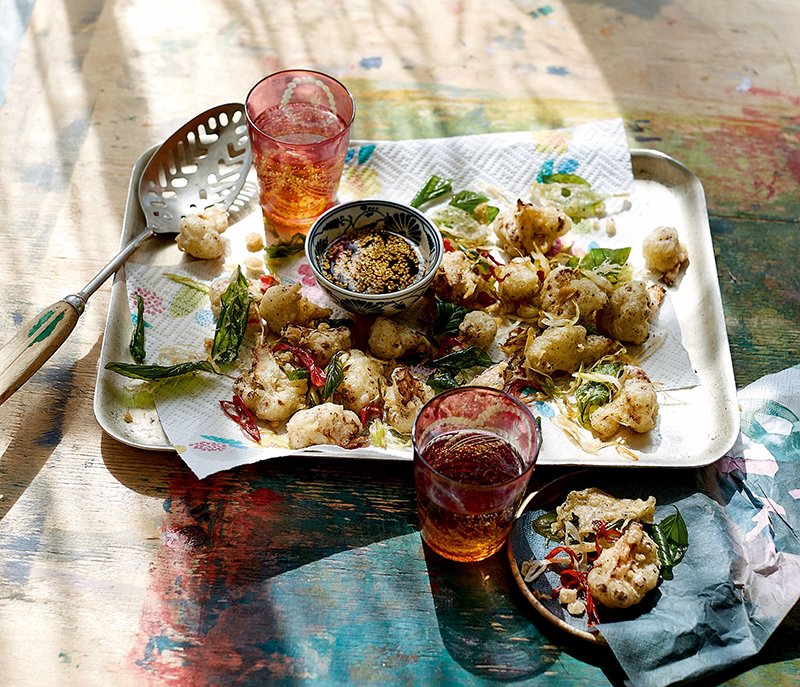 An immense amount of thought and care goes into how chef and restaurateur Ravinder Bhogal feeds people. And in the midst of lockdown she’s got a new cookbook out, called Jikoni. While Jikoni takes its name from Bhogal’s London restaurant – it includes some of Jikoni’s most beloved menu items, including the cult prawn toast scotch egg, and banana cake with miso butterscotch – it’s not necessarily a restaurant cookbook.

“What it looks at is the idea of authenticity,” says Bhogal, a subject that can be a source of “irritation” for her. “Authenticity is such a subjective thing, particularly when you’ve come from the background I came from,” she says. Bhogal was born in Kenya to Indian parents and moved to England aged seven. When your food culture is “twice removed almost” she says it is “always changing and new.”

“And what happens is you begin to become very precious about your old culinary customs and traditions, and you hold on to those. But you start to weave into those the customs of your new nation, of your new land, and that is what immigrant food is; it’s about that lovely reconciliation, if you like, between the old and the new.

“Recipes are like stories that don’t have endings,” she adds. “Always open to adaptation, according to your landscape and what’s available.”

Her own food, she says, is anchored by a desire to nurture and nourish people.

More than anything, she hopes people read the cookbook, discover the recipes and recognise the value in cooking without borders. “In a time where there is so much fear, food is such a connector, it’s such a great way of understanding people,” says Bhogal. “When someone feels like a stranger and you eat their cuisine, you eat their food, you use their ingredients, it’s a great tool for understanding people and their cultures and bringing people together.”

To make the dipping sauce, simply whisk together all the ingredients.
For the batter, heat a dry frying pan over medium heat and toast the peppercorns until they are aromatic. Tip into a pestle and mortar, along with the salt, and crush to a coarse powder. Empty out into a mixing bowl, add both flours and mix well. Now whisk in the sparkling water, adding just enough to make a batter with a double-cream consistency, and being careful not to overbeat.
Fill a large, heavy-based saucepan a third full with the deep-frying oil. Heat the oil to 180C – if you don’t have a thermometer, you will know the oil is ready when a cube of bread turns golden brown in 20 seconds. Dip the pieces of cauliflower into the batter, one at a time, letting the excess drip off, and deep-fry until golden. Remove with a slotted spoon and drain on kitchen paper.
Dip the basil leaves in batter and fry in the same way. When you have finished frying the cauliflower and basil leaves, carefully pour out most of the oil from the pan, leaving just a few tablespoons. Place over medium-high heat and flash-fry the spring onions, chillies and garlic for a minute or so, until the garlic is just beginning to colour. Drain on kitchen paper, scatter over the cauliflower and toss.
Serve immediately, with lime wedges for squeezing and the dipping sauce alongside.

The kulfi will take at least six hours to set, so make it ahead of time. In a large bowl, mix the Ovaltine into the condensed milk until there are no lumps. In a separate bowl, whip the cream to soft peaks, then fold it into the condensed milk mixture. Pour the kulfi into a tub and freeze until set.
Preheat oven to 190C. Line a 24cm square cake tin with baking parchment.
Put the tea leaves in a heatproof jug, pour over the boiling water and allow to infuse for a minute. Strain the tea, discarding the tea leaves, then soak the dates in the hot tea for 10 minutes.
In a large bowl, beat together the butter and sugar until smooth. Stir in the treacle and date syrup, followed by the flour, and mix well. Mix the eggs in one at a time.
Tip the soaked dates and tea into a blender, along with the vanilla extract, and blitz to a puree. Add the bicarbonate of soda and pulse briefly, then add to the bowl and mix thoroughly.
Wipe out the blender, add the bananas and blend until smooth, then add to the cake batter and stir in well. Pour into the tin and bake for one hour or until a skewer inserted in the centre of the cake comes out clean.
Meanwhile, to make the butterscotch, put the cream in a saucepan over low heat. Add the sugar, butter and golden syrup and whisk until the sugar has dissolved and the butter has melted. Finally whisk in the miso, then remove from the heat.
Turn the cake out on to a wire rack and leave to cool a little. Serve warm with the hot miso butterscotch and the Ovaltine kulfi.

Tragic details about the Olsen twins

‘Produce has always been what gives me thrills’

Royalty and a touch of silver

How to avoid mindless snacking if you’re working from home