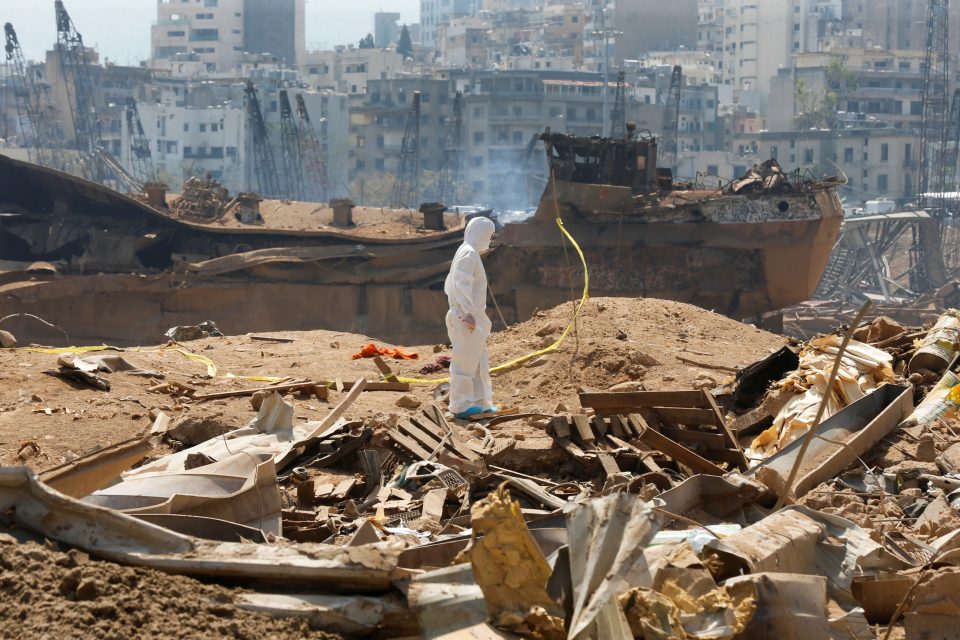 A forensic inspector walks on rubble at the site of Tuesday's blast, at Beirut's port area, Lebanon, August 7, 2020. REUTERS/Mohamed Azakir

The huge explosion in Beirut last week was felt in Cyprus 150 miles away. And not only because it was so loud but also because of its uncanny similarities with the explosion at Mari in Cyprus in July 2011.

In each case the explosion was caused by a consignment of dangerous materiel offloaded from Russian-owned ships that had been redirected to Beirut and Limassol in Cyprus respectively.

In each case the cargo was offloaded and left to degrade for years with lethal consequences in both countries, although the death toll, injuries and scale of destruction in Beirut were much, much higher.

Both explosions occurred in the summer months of July and August when the risk of explosion would have been obvious to anyone with any sense of responsibility for public health and safety.

In Beirut nearly 2,750 metric tonnes of ammonium nitrate was allowed to degrade and become unstable in a customs warehouse in the port right in the heart of the city.

No one in his right mind would store unstable explosive substances for seven years in the middle of a densely populated area, yet that is what happened. Even if – as the president of the Lebanon has said was possible – there was outside interference, the explosion would not have occurred if the ammonium nitrate had been promptly removed from the port area.

In the case of Cyprus the consignment of explosives was moved a few miles outside Limassol to Mari but it was still left there for two years unsecured and exposed to the summer sun.

In both Beirut last week and Cyprus in 2011, the risk was obvious, and if those responsible for the storage and disposal of the explosive materiel can be shown to have been indifferent to such an obvious risk of death they would be guilty of involuntary manslaughter under most criminal systems of justice.

In UK since 2008 it is also possible for corporate institutions including local and national government bodies to be found guilty of corporate manslaughter and pay unlimited fines. This is particularly useful in cases where the fault is systemic and the institution is culpable but too large to impute individual blame.

Recklessness is not always as blatant as in the explosions in Beirut and Cyprus. For example, the UK agencies that were responsible for releasing patients from hospitals into care homes during the 2020 coronavirus pandemic without first testing them, thereby infecting other elderly patients who subsequently died in their thousands, could be guilty of corporate manslaughter.

Recklessness on that scale is comparable to the kind of recklessness that caused the explosions in Beirut and Cyprus; though less spectacular, it is insidious and killed a lot more people.

Last, but not by any means least, we have social recklessnes. Now that a second wave of the coronavirus epidemic is on the cards, it is a good time to revisit Albert Camus La Peste before resorting to the criminal law.

Camus wrote La Peste in the 1940s having studied the history of epidemics extensively.

His take on what is requred is “a vigilance that must never falter. The good man, the man who does not infect anyone, is the man who has the fewest lapses of attention,” and that “it’s a matter of common decency. An idea which may make some people smile, but the only means of fighting plague is – common decency.”

Unlike the plague that affects victims equally, coronavirus is unequal in its operation.

It is a lot more lethal among the elderly and those with underlying conditions.

For this reason a second phase of the pandemic will be more complex to negotiate. The first phase was relatively easy. Once the virus was in the community, a total lockdown was the only way to halt transmission; the virus was starved of human hosts able to spread it from person to person and that proved effective.

The second phase involves living with the virus to protect the economy and people’s livelihoods. So long as the virus is not spreading exponentially and until a vaccine is available, societies have to live with the virus or go bankrupt. So, the economy is not going to be shut down again, which means people will have to take individual responsibility for their behaviour.

The vulnerable will have to take routine precautions like minimising physical contact, handwashing and wearing triple layered masks.

Given that the young are not seriously affected by coronavirus, and given that some might have it asymptomatically, they must show vigilance and common decency.

But they should only be prosecuted for recklessly endangering the lives of others in clear cases.

In both scenarios the only available defences  are accident or self defence  ­- accident will probably be a good defence in many cases.

However, if a person knows he is infected with coronavirus and is infectious and is either indifferent to the risk he is exposing others or carries on regardless of such risk, he is liable to prosecution.

Anyone who goes to work and to pubs and restaurants and recklessly infects others with coronavirus, deserves to go to prison for a long time as a deterrent pour encourager les autres.