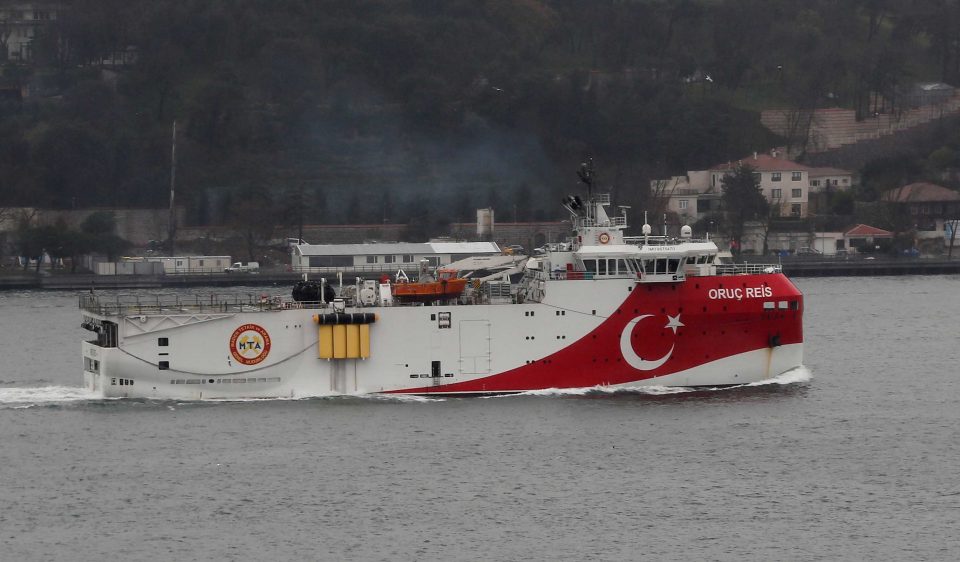 Turkey dispatched a vessel to conduct a seismic survey in a disputed area in the eastern Mediterranean, a move which Greece said was illegal and is likely to heighten tensions between the two NATO allies.

The advisory issued by the Turkish navy said the Oruc Reis vessel would operate in the area over the next two weeks.

The two countries are at odds over overlapping claims for hydrocarbon resources in the region. A similar advisory, or Navtex, last month prompted a dispute that was calmed after the intervention of German Chancellor Angela Merkel, leading Turkey to agree a pause in operations.

But President Tayyip Erdogan said on Friday Turkey had resumed energy exploration work in the region as Greece had not kept its promises on the issue.

On Monday, Erdogan called on the region’s countries to cooperate towards an “acceptable formula that will protect everyone’s rights.”

Speaking after a cabinet meeting, Erdogan said Turkey was ready to resolve the issue of the Eastern Mediterranean on a fair basis through dialogue.

But it would never agree with any initiative aiming at confining his country within its shores.

Greek Prime Minister Kyriakos Mitsotakis chaired a meeting of the government council for defence issues on Monday which examined “ways of reaction to the Turkish provocation”, the conservative premier’s office said.

After the meeting, Greece’s foreign affairs ministry issued a statement urging Turkey to “immediately cease its illegal activities which undermine peace and security in the region”.

Turkey dismissed the Greek objections, saying they had no legal basis, and vowed to continue operations. The foreign ministry said Turkey’s military presence in the area, which it gave no details about, was purely defensive.

Earlier, Minister of State George Gerapetritis told Greek state TV Athens was in full “political and operational readiness”. He reiterated that Greece stood ready to engage in a constructive dialogue with Turkey on their differences.

The United States urged Turkey to halt its operations and avoid steps that raise tensions in the region.

“The United States is deeply concerned by Turkey’s stated plans to survey for natural resources in areas over which Greece and Cyprus assert jurisdiction in the Eastern Mediterranean. Such actions are provocative and raise tensions in the region,” a state department spokesperson said.

The NAVTEX, issued by the Turkish navy’s office of navigation, covered an area of sea south of Turkey’s Antalya and west of Cyprus. It will be in effect between Aug. 10-23.

The Oruc Reis vessel has already reached the location where it will operate after leaving anchorage off Antalya, Turkish Energy Minister Fatih Donmez said on Twitter.

Foreign Minister Nicos Christodoulides said he discussed the latest with his counterparts from Greece and Egypt.

On Monday, Cyprus issued its own Navtex declaring the Turkish activities illegal as they violated international law and maritime safety procedures.

Cyprus said the vessels were committing serious criminal offences and any “individuals and companies working and or providing services, assisting and soliciting to support the illegal actions of Oruc Reis” were violating the Republics rights and would face the consequences.

The notice said an international arrest warrant will be issued against these individuals.

In what could be a related development, state broadcaster CyBC reported last night that two French fighters and a transport plane had landed at Andreas Papandreou air force base.

The pair of Rafale fighters and the C-130’s visit were part of a defence pact between the two countries.