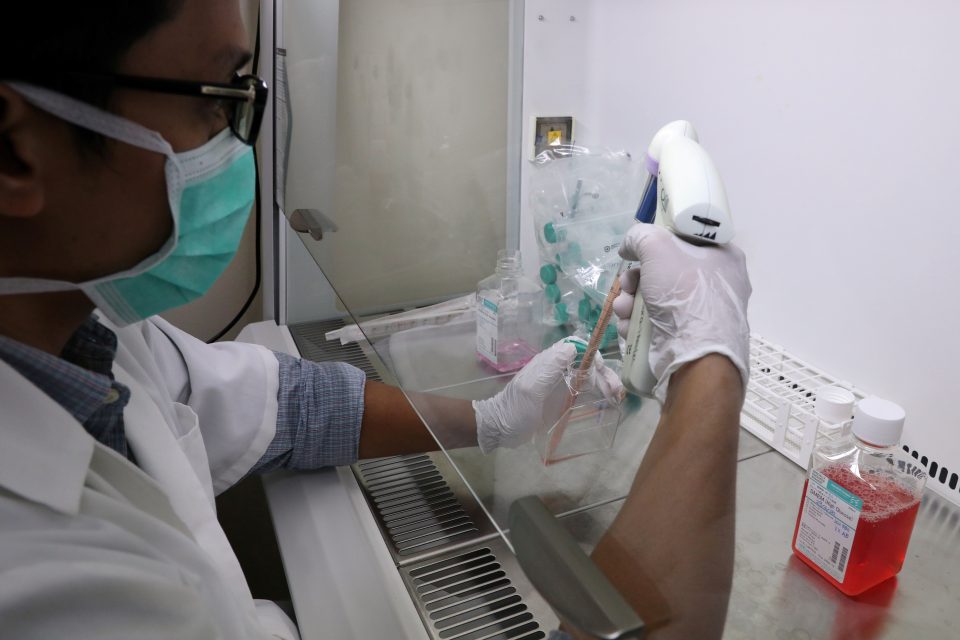 A researcher prepares Sumatran Rhinoceros cells for research at a laboratory in International Islamic University, in Kuantan

Some skin, eggs and tissue samples are all that remain of Malaysia’s last rhino, Iman, who died last November after years of failed breeding attempts.

Now scientists are pinning their hopes on experimental stem cell technology to bring back the Malaysian variant of the Sumatran rhinoceros, making use of cells from Iman and two other dead rhinos.

“If everything is functioning, works well and everybody supports us, it’s not impossible.”

The smallest among the world’s rhinos, the Sumatran species was declared extinct in the wild in Malaysia in 2015. Once it had roamed across Asia, but hunting and forest clearance reduced its numbers to just 80 in neighbouring Indonesia.

Efforts to get the two to breed had not worked.

“He was the equivalent of a 70-year-old man, so of course you don’t expect the sperm to be all that good,” said John Payne of the Borneo Rhino Alliance (BORA), who has campaigned for about four decades to save Malaysia’s rhinos.

“It was obvious that, to increase the chances of success, one should get sperm and eggs from the rhinos in Indonesia. But right till today, Indonesia is still not keen on this.”

Indonesia’s environment ministry disputed accusations of cross-border rivalry as a reason why Malaysia’s rhinos died out, saying talks continue on ways to work with conservationists in the neighbouring southeast Asian nation.

“Because this is part of diplomatic relations, the implementation must be in accordance with the regulation of each country,” said Indra Exploitasia, the ministry’s director for biodiversity conservation.

The Malaysian scientists plan to use cells from the dead rhinos to produce sperm and eggs that will yield test-tube babies to be implanted into a living animal or a closely related species, such as the horse.

The plan is similar to one for the African northern white rhinoceros, which number just two. Researchers in that effort reported some success in 2018 in producing embyronic stem cells for the southern white rhino.

But the process is still far from producing a whole new animal, say Thomas Hildebrandt and Cesare Galli, the scientists leading the research.

And even if it worked, the animals’ lack of genetic diversity could pose a threat to long-term survival, Galli told Reuters.

Indonesian scientist Arief Boediono is among those helping in Malaysia, hoping success will provide lessons to help his country’s rhinos.

“It may take five, 10, 20 years, I don’t know,” Arief added. “But there has already been some success involving lab rats in Japan, so that means there is a chance.”

Japanese researchers have grown teeth and organs such as pancreas and kidneys using embryonic stem cells from rats and mice in efforts to grow replacement human organs.

For now, however, Iman’s hide will be stuffed and put on display alongside Tam in a Borneo museum.