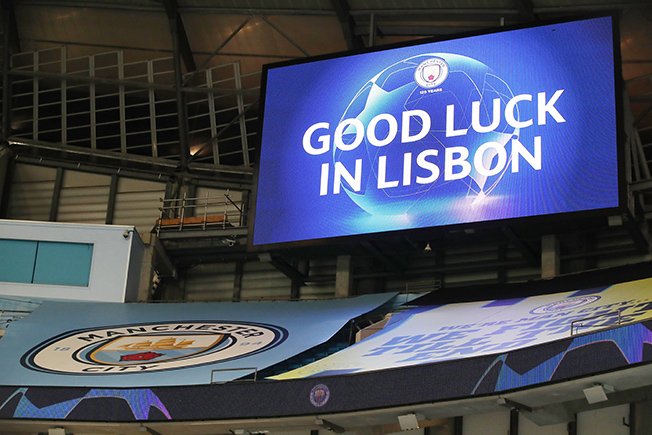 The big screen at the Etihad displays a message to the Manchester City players after they beat Real Madrid to advance to the Champions League quarter-finals, where they face French side Lyon on Saturday night

It is arguably the biggest sports event of this COVID-infected year — eight of Europe’s top teams in a knockout tournament over 12 days in the Portuguese capital, with the Champions League winner to be crowned at the final on Aug. 23.

But while millions will tune in around the globe, if you walk the streets of Lisbon, you could be forgiven for being unaware that any of this is about to happen.

There are no event welcome signs at the airport and none of the usual associated marketing or football-related advertising.

There are no fan-zones in the city, no posters featuring the star players and certainly nothing like the usual stampede for the last available, over-priced, hotel rooms.

With supporters not allowed to attend matches and even the numbers of media tightly limited, there will be no boost in business for local bars and restaurants.

Indeed, this is unlikely to be party time for Lisbon residents either.

The city is still under a state of alert until midnight on the 14th, which means alcohol consumption in public is prohibited, sale of alcohol stops at 2000 local time, restaurants close at 2300.

Masks are obligatory on public transport and large gatherings are being discouraged.

Even those hoping to simply grab a glimpse of a top player strolling the streets are likely to be disappointed.

The teams are living in secure ‘bubbles’ in their hotel and training facilities which they are only allowed to leave with explicit permission and they are warned against meeting people from outside their team and staff.

Inside the hotels, the players are being given private routes to their own dining areas where the food will be served by club designated staff.

With no fans to worry about, the Portuguese police are focused more on helping maintain the secure environment for the participants than the threat of hooliganism.

“The operation is focused on the stadiums, the hotels, and training locations,” Luis Elias of the PSP police force told a news conference on Tuesday.

“We will be paying particular attention to preventing situations of public disorder and other types of incidents like intrusions in the places where competitions are happening, training locations or where players are resting,” he added.

There is of course, the chance that some fans of teams who reach the final might decide to celebrate that occasion in Portugal rather than sat at home in front of the television. However, for most supporters, the sofa is their most likely venue for a bumper two weeks of football.

And television is, of course, the main reason why organisers UEFA have gone to such lengths to complete their season.

Having already lost the Euro 2020 tournament for national teams, which has been postponed to 2021, UEFA could ill-afford to be faced with massive rebates from its broadcast partners if its club competitions failed to finish.

With one-off quarter-final and semi-final games leading up to the final, all to be decided by extra-time and penalties if needed, the drama should make up for the loss of two-legged home and away ties.

UEFA’s second-tier competition, the Europa League, is being held in similar fashion in Germany, playing on the rest days in the Champions League and providing broadcasters with a daily diet of games.

The Champions League action gets under way on Wednesday with Paris St Germain against Italian club Atalanta and the stand-out quarter-final fixture sees Bayern Munich face Barcelona on Friday.