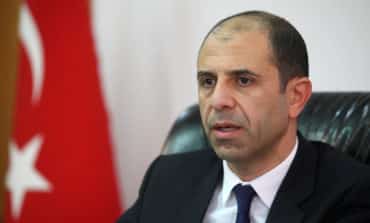 Turkish Cypriot ‘foreign minister’ Kudret Ozersay said on Wednesday he was dissatisfied with the response of the EU Commission president, Ursula Von der Leyen, to his letter complaining that the Greek Cypriot side has banned foreign nationals from crossing to the north using the pandemic as an excuse.

According to Ozersay, the commission’s head said they were aware of the crossing point restrictions and that the commission was closely monitoring the situation.

Ozersay said von der Leyen’s response to his letter explaining the facts of the “unreasonable restrictions” imposed by the Greek Cypriot leadership “did not satisfy us”.

He said that since July 1, when the north started allowing in travellers from abroad and people crossing from the south, the Greek Cypriot leadership has refused to allow visitors from third countries and EU citizens to cross to the Turkish Cypriot side from the government controlled areas.

It is obvious, he said, that this was a purely political decision, unrelated to the pandemic but rather an opportunity used by the Greek Cypriot side to harm the Turkish Cypriot economy.

Ozersay also brought up the reopening of the Ledra street crossing in Nicosia which has remained closed. He said its prolonged closure was negatively affecting businesses in that area.

He also spoke of discrimination, arguing that while the Greek Cypriot side asks Greek and Turkish Cypriots to cross between the two sides with a negative coronavirus test not older than 72 hours, it allows passengers from more than 20 countries to enter the country  without any testing.

First ever 3D VR filmed in space | One Strange Rock