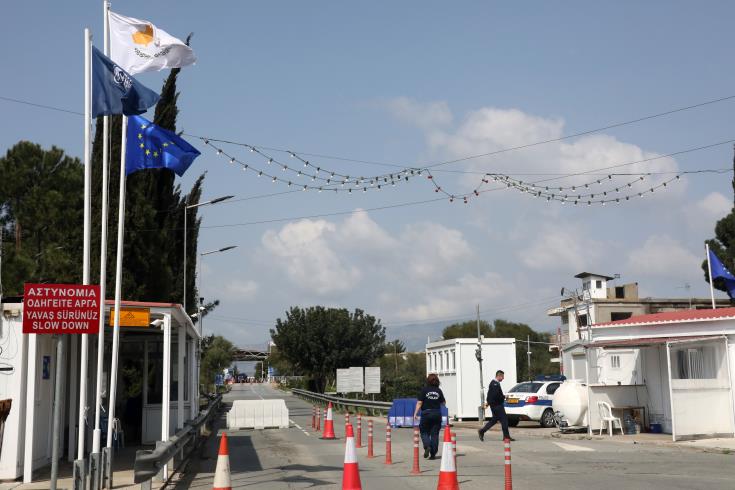 Turkish Cypriot leader Mustafa Akinci claimed on Thursday that the Greek Cypriot side was violating the Green Line Regulation by blocking visitors from EU countries crossing to and from the north.

Speaking after a meeting with the Turkish Cypriot travel agents’ association, Akinci also called for the reopening of the Ledra street crossing which remains closed since last February.

The Turkish Cypriot leader said he would continue to raise the matter with the EU and the UN while consultations were also underway with the Greek Cypriot leadership in a bid to find solutions.

The Greek Cypriot side only allows Greek and Turkish Cypriots and permanent residents in the Republic cross between the two sides. They need to present a negative coronavirus test certificate not older than three days This is required from people who arrive from the north as well as from those who cross to the north and return to the south.

The exclusion of tourists which led to a plunge in arrivals to the north prompting the Turkish Cypriot side to accuse the government of using the coronavirus pandemic as an excuse to harm their economy.

The Cyprus government insists that this is a temporary measure aimed at curbing the spread of coronavirus.

On several occasions, tourists from EU members arriving at Larnaca and Paphos airports were told they can cross to the north if they wish to, but they cannot cross back.

Head of the Turkish Cypriot travel agents association, Orhan Tolun, said after the meeting with Akinci that the Greek Cypriot side continue to place obstacles to crossing between the two sides of EU citizens who arrive at the Republic’s airports and wish to cross to the north.

The Turkish Cypriot aside argues that the measure implemented by the Republic of Cyprus is in violation of the Green Line Regulation which governs the movement of persons and goods between the two sides.

A European Commission spokesperson told the Cyprus Mail last week that they were monitoring the situation very closely and that temporary controls or restrictions at borders may only be used in exceptional circumstances to respond to situations seriously affecting public policy or internal security and they should last only as long as the extraordinary circumstances persist.

A similar response was given by EU Commission president, Ursula Von der Leyen, to Turkish Cypriot ‘foreign minister’ Kudret Ozersay to his letter complaining that the Greek Cypriot side has banned foreign nationals from crossing to the north using the pandemic as an excuse. Ozersay on Wednesday said he was not satisfied with that response.

The Turkish Cypriot side allows Greek Cypriots and persons to cross to the north from the government-controlled areas as long as they carry out a one-off coronavirus test on the condition they have not left the island in the last 14 days.