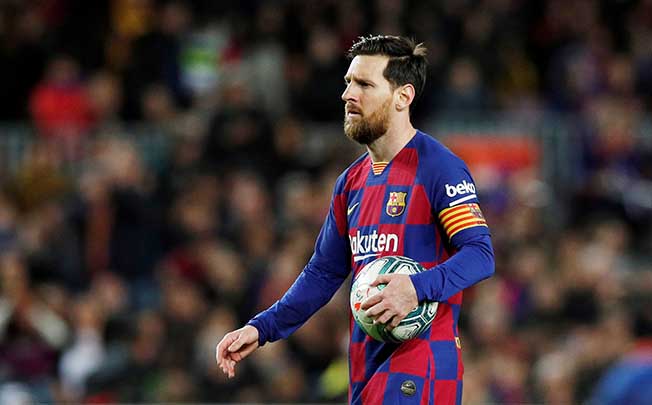 Messi and Lewandowski will go head-to-head on Friday when Barcelona face Bayern in a mouthwatering Champions League quarter-final showdown in Portugal.

Former Bayern and Germany defender Lothar Matthaus this week claimed in-form Lewandowski has now jumped ahead of Messi in the global player standings, having fired a stunning 53 goals in 44 games this term.

But Barca boss Setien rejected that notion, insisting Argentina star Messi remains as deadly as ever, ahead of the two European heavyweights – who have both won the competition five times – slugging it out in Lisbon.

“Lewandowski is a great player but I think he is not at the level of Leo, I think that is clear,” said Setien.

“It’s true he is in a fantastic moment, it’s 13 goals in the Champions League and he’s well assisted by a lot of team-mates around him.

“But Leo’s in a great moment too as we saw against Napoli.

“It’s good these players are out there on the pitch and we can enjoy them.

“Leo Messi can help us win this game, of course, but I always believe in the strength of the team. You have to help Messi and give him the ball.

“It’s true he can make goals for himself but without the strength of the team, Leo would be less, just like any other player you can highlight.”

Bayern have been installed tournament favourites by some having thumped Chelsea 4-1 in the last-16 second leg in Munich and 7-1 on aggregate.

Hansi Flick’s side have already powered to the German league and cup double, and showed no ill effects when brushing aside the Blues despite a five-week fixture gap.

“We know the power of our opponent and I won’t play that down,” said a wary Setien.

“Their numbers are not just numbers, it’s the capacity to what they do.

“They are an extraordinary team but we are too. That’s the reality.

“Many things worry us about them, they are a complete side.

“They press you well, we know this, but let’s see if we can beat their press. If we get through that we can hurt them.”

Barcelona will be boosted by the return of long-term injury absentee Ousmane Dembele, who has not played since November after a string of injury concerns.

“In the case of Dembele, it’s really satisfying that he’s included and able to play a few minutes,” said Setien.

“He’s been unable to play any part for almost a year. We’re hoping he can manage a few minutes and do well.”

Bayern centre-back Niklas Sule is back in action after almost 10 months sidelined due to knee surgery, and is tipping the German giants to see off their Catalan foes.

“It’s something that I’ve not experienced before, the way we interact with each other.

“It’s always been special here but really, the team spirit we’ve had this year has been exceptionally good.

“It’s incredibly difficult to win this Champions League title, but I think we have the opportunity, with our squad, to achieve something special this year.”