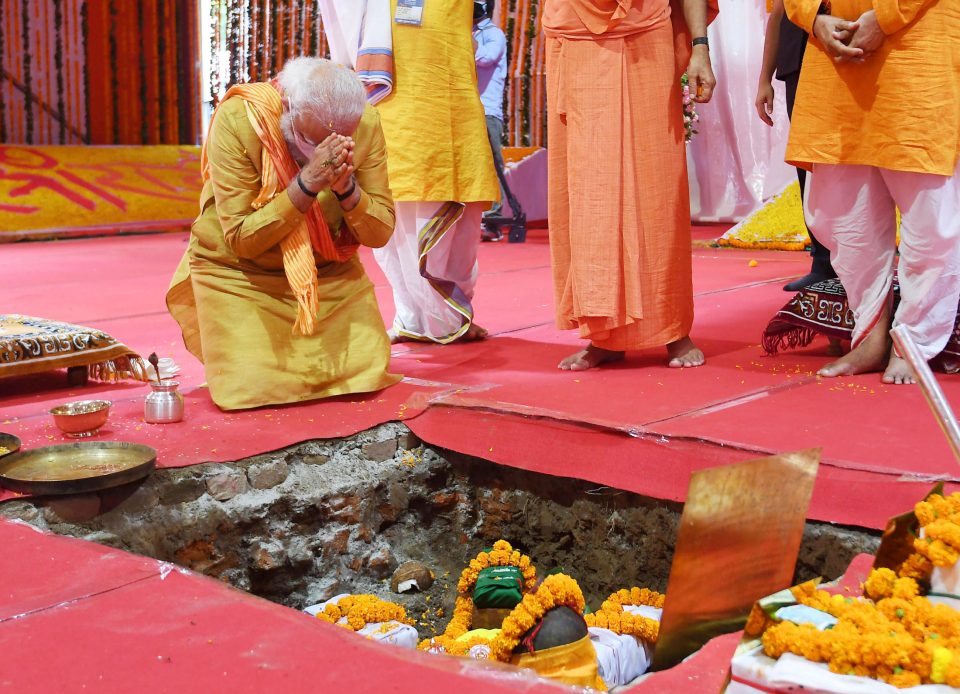 India's Prime Minister Narendra Modi attends the foundation-laying ceremony of a Hindu temple in Ayodhya, August 5, 2020. India's Press Information Bureau/Handout via REUTERS ATTENTION EDITORS - THIS IMAGE WAS PROVIDED BY A THIRD PARTY. NO RESALES. NO ARCHIVES.

“India is emotional as decades of wait has ended,” declared India’s Prime Minister Narendra Modi, laying the cornerstone of a new temple in Ayodhya a week ago. “For years our Ram Lalla (the infant Lord Ram) lived beneath a tent; now he will reside in a grand temple.” As if infants cared about the size of their dwelling.

The 16th-century mosque that once stood on the site was destroyed by a Hindu mob in 1992, sparking riots that killed more than 2,000 people. Modi had visited the location the previous year, swearing not to return until the mosque was gone and a Hindu temple was under construction on the site, and lo! – there he was laying a 40 kg foundation stone of pure silver for the new temple.

Does Narendra Modi really believe that Rama, 7th avatar of the Hindu god Vishnu, was born at this particular site in Ayodhya at 12.05 pm on January 10, 5114 BC? As with any politician who exploits religion to gain power, we’ll never really know, and in any case it doesn’t matter.

What does matter is the exploitation, which is destroying the secular Indian democracy of the past. And of course not only Hindu extremists exploit religion: on Sunday police opened fire on Muslim demonstrators in Bangalore, killing three, after local Muslim leaders spotted a Facebook post by a Hindu politician that allegedly “offended” the Prophet Muhammad. (Does he really take offence so easily?)

But there are six Hindus in India for every Muslim Indian, so this is not going to end well for the Muslims. Indeed, it has already ended very badly for some. Kashmir, the only Indian state with a Muslim majority, suddenly had its special status stripped away last August by Modi.

Kashmir has been split in two and is occupied by hundreds of thousands of Indian troops. Most of its politicians were kept under arrest for six months without charge, and the most senior ones have been charged under the Public Safety Act, which allows detention without trial for up to two years.

Five years ago, Indian-born artist Anish Kapoor called Prime Minister Modi a ‘Hindu Taliban’, and Modi’s role in promoting an anti-Muslim pogrom that killed 2,000 (including some Hindus) when he was chief minister of Gujarat state in 2002 gave early evidence of his promise. But he was surprisingly low-key about religion during his first term as prime minister of all India in 2014-19.

That went well economically, and Modi was rewarded with a landslide majority in the May, 2019 election – whereupon he dropped his mask of moderation and went on an anti-Muslim spree. Kashmir last August, Ayodhya this August – and in between, a pair of new laws that threaten to take away the citizenship of many of India’s Muslims. (They’re less trouble if they can’t vote.)

One new law is the National Register of Citizens, which everyone must be inscribed in. To be registered, however, you have to prove you are a citizen, which would pose a problem for many people who lack the necessary documents to prove they were born in India. It’s a particular problem for Muslims, who are on average poorer than Hindus, and therefore less likely to have such documents.

But never mind: the Citizenship Amendment Act, passed at the same time, says that most illegal immigrants and refugees will be allowed to register without such documents. Since undocumented people living in India will effectively be treated as illegal immigrants, that will give them automatic citizenship if they are Hindu, Sikh, Christian or Buddhist. Muslims, however, do not get a free pass. No documents? Problems.

India can never expel 170 million Muslims. There’s nowhere else for them to go. The goal of Narendra Modi and his Hindu supremacist Bharatiya Janata Party (BJP – Indian People’s Party) is to redefine them as an underclass without rights, and at the same time to preserve them as a permanent ‘threat’ that keeps Hindus united behind the BJP.

Why do so many Hindus go along with this vicious nonsense? Because for about seven centuries waves of Muslim invaders from central Asia ruled over most of India. It ended in the 18th century with the establishment of British rule (which didn’t interfere with religion), but by then one-third of the population of the subcontinent was Muslim.

Very few of today’s Muslims in India (or Pakistan or Bangladesh, for that matter) are descended from Central Asian conquerors. Most are descended from native-born Hindus who were forcibly converted to Islam, or changed their religion later to escape the Hindu caste system or the higher taxes paid by non-Muslims, or even sometimes for genuinely religious reasons.

It was all a very long time ago, and it shouldn’t matter now. In a truly secular India, it wouldn’t matter, which is why the country’s founders insisted that it should be secular. But that’s not what Modi wants, and Modi is winning.

Belarus leader appeals to Russia as pressure to quit grows