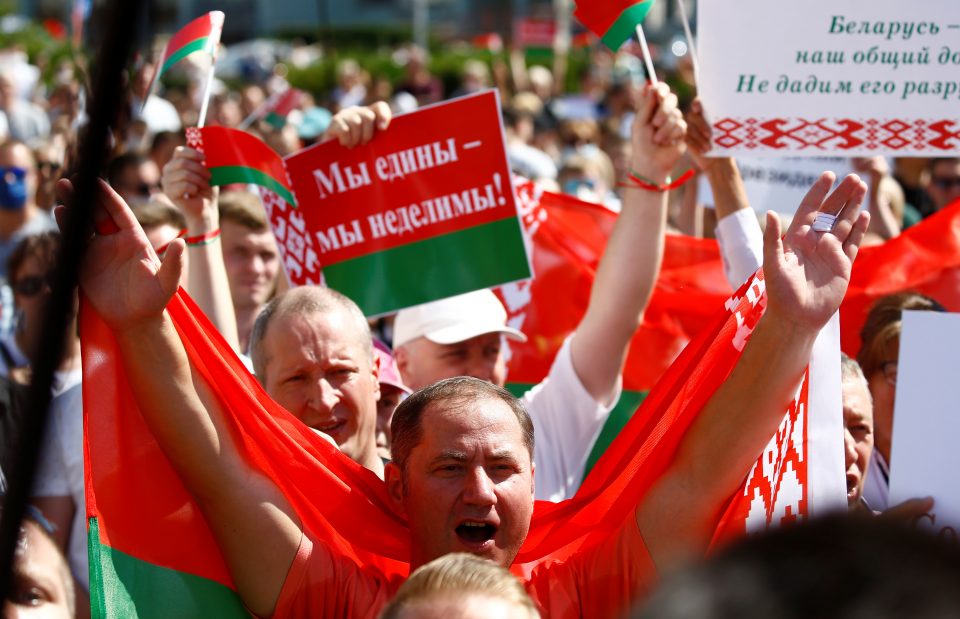 Russia said on Sunday it had told Belarusian leader Alexander Lukashenko it was ready to offer military assistance if necessary as demonstrators gathered for one of the biggest protests against Lukashenko’s contested re-election yet.

A least two protesters have been killed and thousands have been detained since last Sunday’s vote, which opponents of Lukashenko, in power for 26 years, say was rigged to disguise the fact that he has lost public support.

He denies losing, citing official results that gave him just over 80% of the vote.

The Kremlin said Russian President Vladimir Putin had told Lukashenko Russia was ready to assist Belarus in accordance with a collective military pact if necessary and that external pressure was being applied to the country.

It did not say where from.

There was tight security as Lukashenko’s supporters gathered in central Minsk for the first time since the election to voice their support for him and watch him give a fiery speech.

Lukashenko, under pressure from the European Union for cracking down on his opponents, said NATO tanks and planes had been deployed 15 minutes from the Belarusian border. NATO was not immediately available for comment.

“NATO troops are at our gates. Lithuania, Latvia, Poland and our native Ukraine are ordering us to hold new elections,” he said, adding that Belarus would “die as a state” if new polls were held.

“I have never betrayed you and will never do so,” he said.

Often emotional in state TV appearances, the 65-year-old leader had already alleged a foreign-backed plot to topple him.

Several thousand people attended the protest. Opposition media channels said Lukashenko, a onetime manager of a Soviet-era collective farm, had bussed people in from other parts of the country and that they were coerced into attending.

Reuters could not independently confirm that.

“The motherland is in danger!” an earlier speaker told the crowd, who chanted: “We are united, indivisible!”

Some of those present held Belarusian national flags and chanted “For Belarus!” or “For Batka!”, Lukashenko’s affectionate nickname, as patriotic music sounded from speakers.

“I’m for Lukashenko,” said Alla Georgievna, 68. “I don’t understand why everyone has risen up against him. We get our pensions and salaries on time thanks to him.”

Russia, which has had a troubled relationship with Lukashenko, is watching closely as Belarus hosts pipelines that carry Russian energy exports to the West and is also viewed by Moscow as a buffer zone against NATO.

The EU is gearing up to impose new sanctions on Belarus in response to the violent crackdown.

Protesters show no signs of backing down.

Sviatlana Tsikhanouskaya, Lukashenko’s opposition rival in the contested election, has called for a huge “March of Freedom” through the centre of Minsk, the Belarusian capital, starting at 1100 GMT on Sunday.

Like previous protests, it is expected to culminate on Independence Square outside the main government building, the same location as the pro-Lukashenko meeting.

In an unusual move, Igor Leshchenya, the Belarusian ambassador to Slovakia, declared solidarity with protesters in an undated video posted by Nasha Niva media on Saturday. Other state employees, including some police officers and state TV staff, have also come out in support of the protests.

Some of the country’s biggest state-run industrial plants, the backbone of Lukashenko’s Soviet-style economic model, have been hit by protests and walkouts too.

Opposition presidential candidate Tsikhanouskaya, who fled to neighbouring Lithuania on Tuesday, has called for an election recount.

Her campaign has also announced she is starting to form a national council to facilitate a power transfer.

Lukashenko and Putin have spoken twice this weekend.

Ties between the two traditional allies had been under strain before the election, as Russia scaled back subsidies that propped up Lukashenko’s government.

The neighbours signed an agreement in 1999 that was supposed to create a unified state. That project was never properly implemented however, and more recently Lukashenko had rejected calls by Moscow for closer economic and political ties as an assault on his country’s sovereignty.

Boy being treated after snake bite