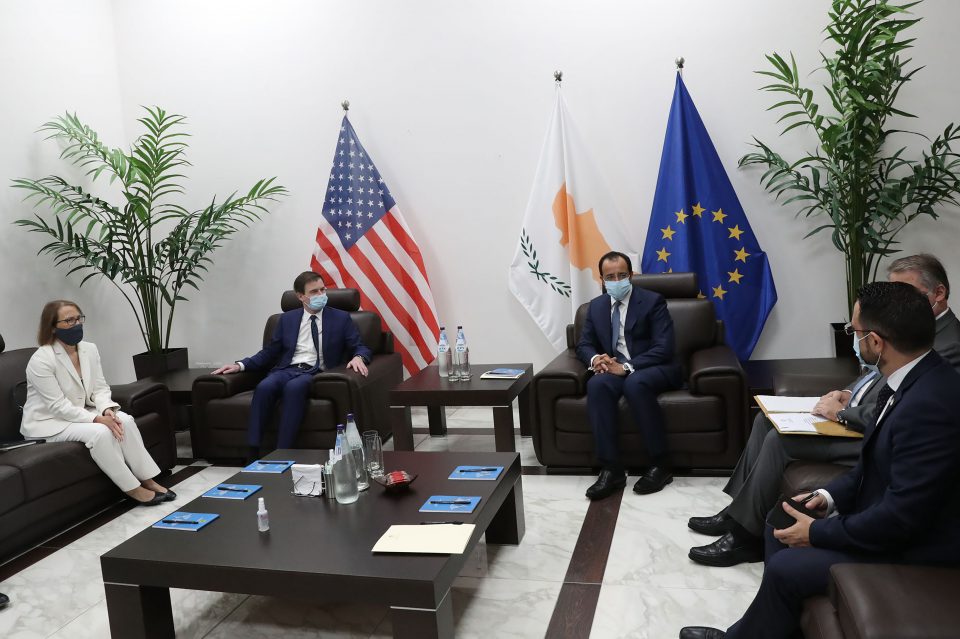 Christodoulides and Hale at Larnaca airport on Sunday

The Turkish Cypriot ‘foreign minister’ has accused the United States of a one-sided approach on Cyprus after US Under Secretary of State for Political Affairs David Hale held talks with Foreign Minister Nicos Christodoulides during a stopover at Larnaca Airport on Sunday but held no contacts with the regime in the north.

In a written statement ‘foreign minister’ Kudret Ozersay said that the “one-sided approach” by the US was “mistaken”, adding that he had conveyed his position to the US ambassador in Nicosia Judith Garber by telephone last week.

He said he had told Garber that one-sided consultations without any contact with representatives of the north are out of step with the reality on the island and the spirit of democratic dialogue.

These approaches do not contribute to stability in the region but only fuel the “audacious approach of the Greek Cypriot leadership and stoke tension and instability,” he added in a written statement.

Ozersay also said that he had complained to the US ambassador about what he said were obstacles imposed by the Greek Cypriot side to movement across the Green Line and the negative impact this is having on the Turkish Cypriot economy.

The Turkish Cypriots claim that the Cyprus government is using the coronavirus as a ploy to undermine the economy in the north. The Cyprus government counters that the restrictions on crossings for non-Cypriots are a temporary measure dictated by public health concerns.

Hale flew to Larnaca on Sunday from Lebanon and held talks with Christodoulides.

The two expressed continued support for UN Security Council resolutions on Famagusta, while Hale also affirmed America’s support for the UN-facilitated process to reach a Cyprus solution, according to a US Embassy in Nicosia press release.

“The two discussed the growing strategic significance of the Eastern Mediterranean and recent developments in the region, including in Lebanon,” it said.

It is added that Hale expressed America’s “desire for increased cooperation on hydrocarbon development as a means to provide durable energy security and economic prosperity throughout the Eastern Mediterranean.”

“He reaffirmed American support for the right of the Republic of Cyprus to exploit its natural resources, including the hydrocarbons found in its territorial sea and exclusive economic zone and that these resources should be equitably shared between the Greek Cypriot and Turkish Cypriot communities.”

It added that Hale “affirmed the deepening partnership and shared values between America and the Republic of Cyprus.

“He applauded the expanding bilateral security cooperation, especially in counterterrorism, maritime and border security, and the prevention of human trafficking,” it added.

He also “pointed to Secretary Pompeo’s announcement in July of the Department of State’s intention to provide International Military Education and Training (IMET) funding to the Republic of Cyprus – contingent on Congressional appropriations and notification – as a symbol of the deepening cooperation.”

The two, “also discussed the ongoing division of Cyprus.”

What’s it like to hear colors? – A VR 360° synesthesia experience