Rodger Davies, US ambassador to Cyprus who was shot dead in 1974

The US embassy in Nicosia on Wednesday marked the anniversary of the deaths of Ambassador Rodger Davies and employee Antoinette Varnava, who were shot and killed during a protest outside the embassy on August 19, 1974.

Ambassador to Cyprus Judith Garber paid her respects by laying a wreath at a memorial plaque on the embassy grounds in Nicosia.

“Today we remember and honour the lives of Ambassador Rodger Davies and Embassy employee Antoinette Varnava, who were killed in the line of duty on August 19, 1974,” the ambassador tweeted.

Davies and Varnava were shot dead during a demonstration outside the embassy by Greek Cypriots angry at the US failure to prevent the Turkish invasion of the island.

The ambassador had sought shelter in a hallway in the building when a shot struck him in the chest. Varnava rushed to his aid but was also struck down with a bullet to the head.

According to an account by journalist and historian Makarios Droushiotis, a group of men armed with Kalashnikov rifles climbed atop a building opposite the embassy and at least one of them opened fire.

The bullets smashed through windows and ricocheted off a wall; one of the shells struck Davies, killing him.

On being informed of the incident, Glafcos Clerides, then acting president, rushed to the embassy and went up to the first floor where he saw Davies lying dead.

Clerides gave instructions that the body be taken to a hospital. Soon after he called US Secretary of State Henry Kissinger to convey his grief over the ambassador’s death. Kissinger reportedly demanded that Cypriot authorities investigate the incident and bring the culprits to justice.

But the ensuing probe got nowhere and the case was filed as unsolved. This, in turn, led to all sorts of conspiracy theories among the Cypriot public, such as that the CIA had Davies assassinated to keep him from speaking out about the coup against Makarios, in which Davies was supposedly implicated.

Davies presented his credentials to then-President Makarios on July 11, 1974 – only four days before the coup. 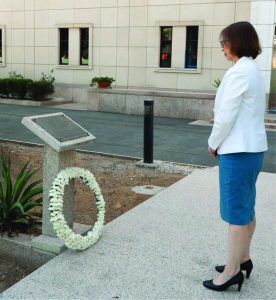 The Americans continued to pressure Greek Cypriot authorities into solving the case. In 1976, on instructions from Makarios, the case was reopened.

According to Droushiotis, the US government – distrustful of the Greek Cypriots – insisted on taking an active role in the investigations. Questioning of witnesses took place at the US embassy.

In mid-1976 the Americans secured testimony from a man by the name of Soteriou, who witnessed the August 1974 events as they unfolded.

Soteriou said he saw the gunmen opening fire at the embassy, and named other eyewitnesses, which included senior police officers. Soteriou also identified the gunman who had fired at the embassy. However, no one else would corroborate Soteriou’s testimony, which stymied the investigation.

A breakthrough came when the US government discovered footage of the embassy incidents taken by the American television network ABC. ABC agreed to provide the footage but on condition that the material would not be used in court.

Despite this, through the footage the Americans were able to confirm Soteriou’s account, and subsequently at least four more persons corroborated Soteriou’s testimony.

The case was led to court, with two defendants – including the gunman – initially facing charges of homicide. Prosecutors subsequently decided to change the charges to illegal carrying of firearms, apparently wary that the murder charges would not stick. The court found the two defendants – G. Ktimatias, the gunman, and N. Leftis – guilty as charged, sentencing them to seven and five years in prison, respectively.

Their sentences were subsequently reduced and they were released after 18 months.

Coronavirus cases surge across the world