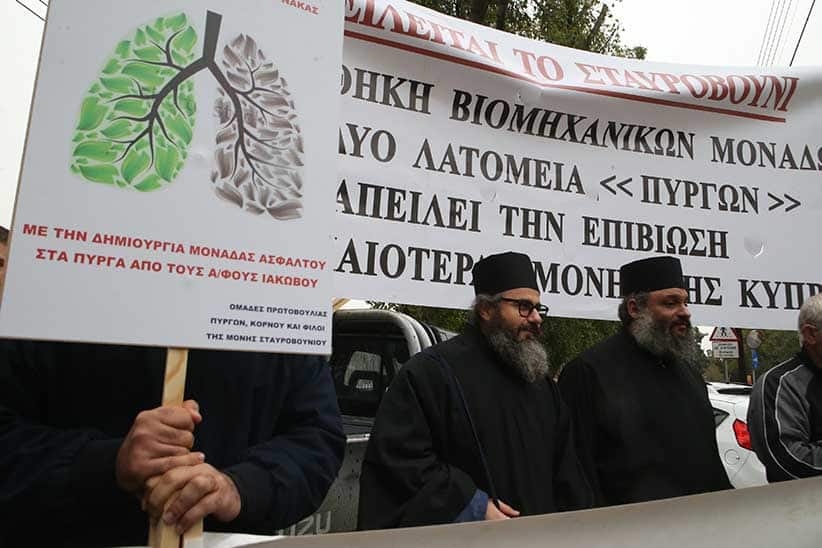 A previous demonstration by people near one of the existing plants

Communities in the Vasilikos area on Thursday threatened to block access to the under construction energy centre if the government fails to retract a decision to move an asphalt plant to the area.

Head of the communities coordinating committee and Kalavasos community leader Lefteris Fokas said in 2014 they agreed to have the fuel storage facilities moved to the area but they also agreed with then Energy Minister Yiorgos Lakkotrypis no pollutant factories, such as asphalt plants, would be placed in the area.

Last month, the cabinet agreed to move two asphalt plants in Geri and Tseri to different areas after multiple protests from Dali residents that it was affecting their and their children’s health.

“Now the Council of Ministers without conducting any study, without informing us and without holding consultations, has decided that the asphalt plant will be moved from Dali and Tseri to the Kalavasos area, something we will never accept,” Fokas said.

After last month’s cabinet meeting Agriculture Minister Costas Kadis said intensive efforts had been made in recent months to have the two plants moved. “With the help of the president in today’s meeting with the owners of the factories, it was decided to start the process of moving them, with the involvement of all relevant services,” the minister said.

It later emerged that one of the areas pegged to be the new home of the asphalt plans was the Vasilikos area, which drew the communities’ reactions last month as well.