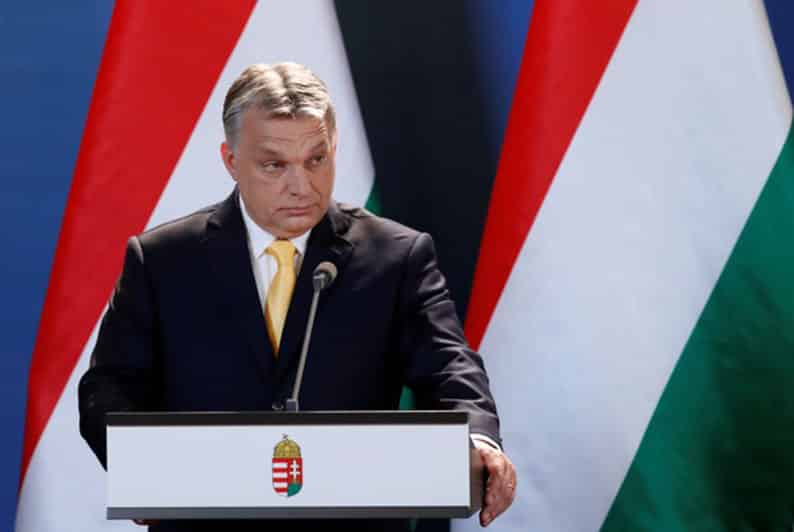 Orban, a nationalist who has been in power for more than a decade, was speaking at an event to inaugurate a monument commemorating the Treaty of Trianon, which was signed after World War One and led to Europe’s maps being re-drawn.

“Western Europe had given up on … a Christian Europe, and instead experiments with a godless cosmos, rainbow families, migration and open societies,” Orban said in a speech.

He said the monument, a 100-metre long and 4-metre wide ramp carved into a street near Budapest’s parliament building, was a call to central European nations to strengthen their alliance and rally around what he called the “Polish flagship”.

In Poland, Hungary’s main ally in central Europe, the ruling Law and Justice party (PiS) has pursued a socially conservative platform since coming to power in 2015 and made opposing “LGBT ideology” a key plank of its electoral strategy.

In Hungary, rights groups say hostility to LGBT+ people has increased since Orban won a third term in 2018.

Orban himself had rarely criticised rainbow, or same-sex families, but Parliament’s speaker – a long-time ally of Orban – had equated gay adoption with paedophilia.

Last weekend, two rainbow flags were torn down from municipals buildings in Budapest, prompting a warning from the U.S. Embassy that neo-Nazi groups should not be tolerated.

Many Hungarians still view the Treaty of Trianon as a national trauma because it took away two-thirds of the country’s territory and left millions of ethnic Hungarians living in what are now Romania, Slovakia, Serbia, Austria and Ukraine.

On the walls of the monument, visitors can read the names of more than 12,000 villages and towns that were part of Hungary before the treaty. A granite block split into several parts encloses a flame.

Orban has granted citizenship to ethnic Hungarians living beyond the country’s borders and also the right to vote in elections as part of his efforts to restore a battered sense of national pride. Their votes helped Orban secure a strong majority in parliamentary elections.

Hotel occupancy in Paphos to average 20 per cent this August

The artist who paints what she hears