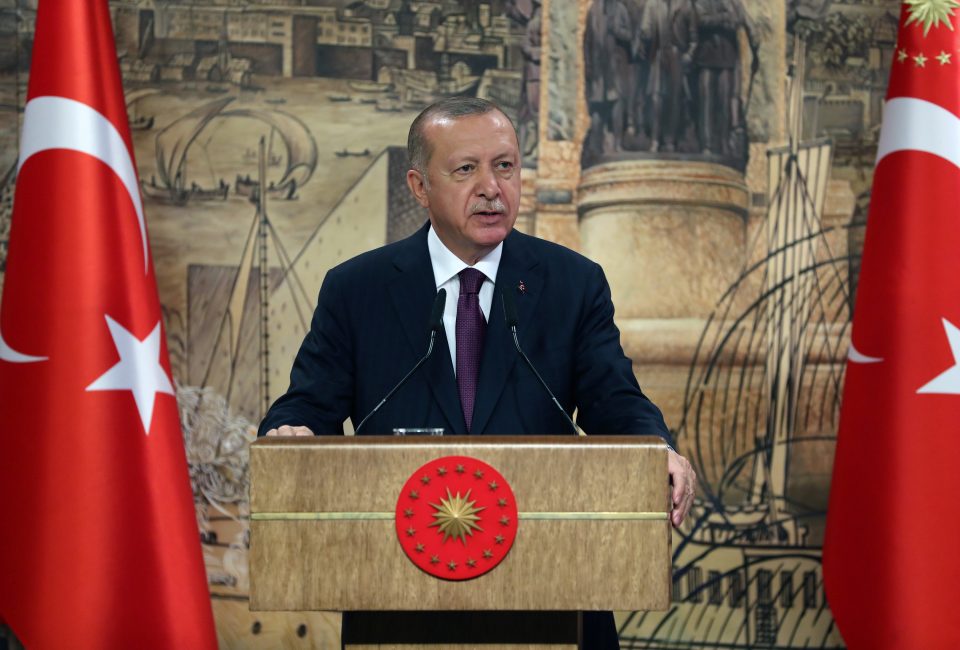 For President Recep Tayyip Erdogan, these steps are part of a wider strategy that aims to break up existing maritime arrangements and establish Turkey as the predominant regional power

From drill ships to diplomacy, naval exercises to ‘neo-Ottomanism’, Turkey is currently running a campaign across the Eastern Mediterranean with one immediate goal: break the status quo.

In pursuit of this objective, Ankara has sent military aid to its Libyan allies and flotillas of warships out to sea – while it is also now courting other regional nations.

Recent weeks have seen Ankara make generous offers to beleaguered Lebanon, while supporting Sunni Muslim and pro-Muslim Brotherhood factions in the north of that country.

Turkey has also made a major effort to boost relations with distant Malta, which now finds itself off a North African coast controlled by Ankara’s Libyan allies.

For Turkish President Recep Tayyip Erdogan, these steps are part of a wider strategy that aims to break up existing maritime arrangements and establish Turkey as the predominant regional power.

Indeed, “Turkey is determined to seek its rights in the Eastern Mediterranean until the end,” Erdogan said in Ankara on August 19, comparing regional rivals to “pirates” and “colonialists”.

Yet, for all the rhetoric, Turkey remains largely isolated, while Erdoğan’s strategy also holds some grave risks.

A taste of these was provided by last week’s collision between a Greek and Turkish warship and last month’s confrontation between French and Turkish vessels off Libya.

For Cyprus, too, these grand ambitions in Ankara may also leave the island’s offshore resources untapped for some time to come.

They may also initiate a long, frozen conflict in the Aegean – with harmful consequences for many.

“To be honest, I don’t think anyone is going to get anything out of this,” Ozgur Unluhisarcikli, the German Marshall Fund (GMF) think-tank’s Turkey expert in Ankara, told Cyprus Mail. “But for Turkey, that is also a kind of victory – as while Turkey doesn’t really want to exploit regional resources for itself, disrupting everyone else’s ability to do so still makes Turkey the key regional power.”

Recent times have seen a number of new – and contradictory – bilateral maritime boundary deals in the Eastern Mediterranean, starting with Turkey’s November 2019 agreement with the Government of National Accord (GNA) in Libya.

Both Athens and Ankara are thus attempting to build their portfolios of international maritime agreements – and friends.

For the latter, “Delimitation agreements facilitate Turkey’s efforts to add a legal path to further boost its geopolitical, multi-regional standing,” Associate Professor Sotiris Serbos, from the Hellenic Foundation for European and Foreign Policy in Athens told Cyprus Mail. “This increases Turkey’s leverage over any future negotiations.”

With an eye on potential future talks over regional maritime boundaries, then, “Turkey is making a diplomatic offensive now,” says Unluhisarcikli.

As part of this, Turkish Defence Minister Hulusi Akar and Foreign Minister Mevlut Cavusoglu both met with their Maltese counterparts over the past month, discussing defence cooperation and illegal immigration – a particular concern for Malta, lying just off the Libyan coast.

Turkey has also rushed to send aid to beleaguered Lebanon, since the horrific explosion in Beirut, while also offering the port of Mersin as an alternative supply hub for Lebanese goods.

“Turkey is also one of the candidates to rebuild Beirut harbour,” says Heiko Wimmen, Lebanon analyst for the International Crisis Group. “There is also a section within Lebanese society – amongst Sunni Muslims – who have some sympathy for Turkey’s neo-Ottoman project.”

This support base is mainly in northern Lebanon, the power base of Al-Jamaa Al-Islamiya – a Sunni group tied to the Muslim Brotherhood, which Turkey has supported across the Arab world.

“On demonstrations in the north, you’ll often see Erdogan’s face on banners and Turkish flags being flown,” adds Wimmen.

For Greece, meanwhile, there has been a particular looming deadline impacting its own diplomatic efforts.

“There’s a certain anxiety in Athens about the fact that Turkey will become president of the UN General Assembly in September,” adds Serbos. “Greece wants agreements to deposit at the UN before then, so as to strengthen its position.”

For Turkey, competing with Greece for influence over other regional countries has some major drawbacks, however.

“Greece has the backing – more or less – of all the EU countries, while Turkey has problems with many of the Mediterranean’s nations,” says Unluhisarcikli. “This is one reason why Turkey is militarising the crisis more – its diplomatic weakness.”

Turkey’s support for the previous, Muslim Brotherhood government in Egypt – and Cairo’s support for the GNA’s rivals in Libya – has left it with few friends on the Nile. Turkish-Israeli relations have also long been poor, with Erdogan’s recent fury against the UAE’s recognition of Israel adding to the hostility.

France, meanwhile, “sees Turkey as a geopolitical rival,” adds Unluhisarcikli, “particularly in Africa, where Turkey has also recently been trying to increase its influence.”

In Lebanon, too, “Other groups have very direct, close allies,” says Wimmen. “Iran, the US, the French – they all have very clear and reliable connections, while with Turkey, you don’t  really see that.”

With the diplomatic route unlikely to prove fruitful, then, tensions at sea are likely to continue – with negative consequences for Cyprus, in particular.

“While what is happening is not really about Cyprus, but bigger, regional geostrategic issues,” says Dr Ian Lesser, the GMF’s Vice President, based in Brussels, “sudden flare-ups as a consequence of these can have big repercussions for the country… Cyprus is a big stakeholder in current stability.”

The risk of such a flare up – along with global problems in the oil and gas market – is likely to put paid to major plans for the exploitation of gas reserves in Cyprus’ EEZ – at least for now.

Meanwhile, the dispute between Greece and Turkey also seems unlikely to resolve any time soon.

“Many of the positions of the two sides seem unbridgeable,” says Zenonas Tziarras, Researcher at the PRIO Cyprus Centre in Nicosia, with “certain red lines on each side non-starters for the other.”

Athens and Ankara have, nonetheless, both stated their desire to negotiate a solution, with Germany – as EU president – also declaring its wish to restart recently abandoned talks on the Aegean.

“At this point,” however, “these talks are mostly considered a crisis management mechanism,” adds Tziarras. “There aren’t any great expectations as to what they will achieve.”

For now, then, while some regional countries will continue to enjoy some unusually warm attention in this competition of claims, the longer term may see relationships a good deal more frozen, around the Eastern Med.

‘Broccoli isn’t the answer to everything’