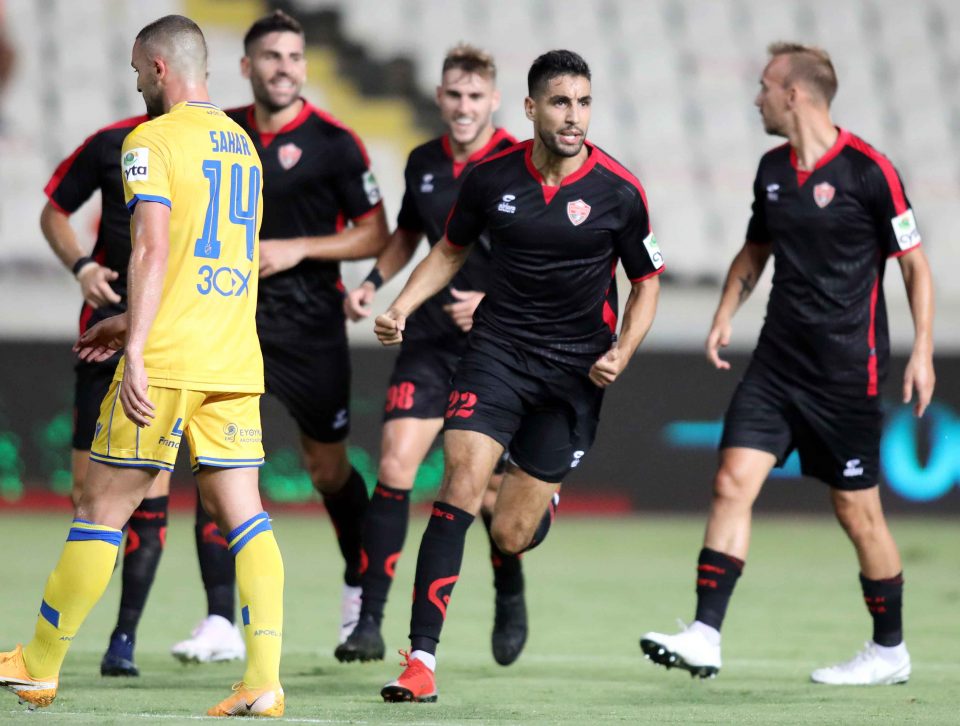 Karmiotissa players celebrate after a goal scored against Apoel

The new Cyprus football season has officially begun, with the first round of games kicking off on Friday night. The first round has had numerous surprising results, with many favourites unexpectedly dropping points against seemingly weaker opposition.

Apoel’s draw with Karmiotissa signalled the way for things to come, with the Nicosia club being unexpectedly sloppy at the back, allowing the away team to score twice in the process.

Apoel press officer Nektarios Petevinos said that his team “learned a serious lesson” and that the side “exhibited shakiness” on its first official outing.

Meanwhile, Karmiotissa manager and former Apoel player Chrysis Michael expressed disappointment and agitation with an Apoel fan who insulted both him and his family.

Omonia also dropped points after their draw away at Pafos. None of Omonia’s two goals came from open play, but coach Henning Berg stated that he found his side’s display generally pleasing.

“Our performance was better than the result”, Berg said.

The Norwegian also spoke about Omonia’s upcoming European game, saying that they could have had more time to rest.

“Cypriot clubs who played in Europe had some help in previous years, that’s why they were successful”, Berg stated. “We have not had that help”, he added.

Elsewhere, even though Anorthosis started their season with a 3-1 win over Ermis, both manager Temur Ketsbaia and chairman Christos Poullaides expressed serious concerns during their respective talks to the media.

Ketsbaia touched on the issue of stadium approvals for the current season, saying that the uncertainty over the fixture scheduling is unacceptable. “It’s not possible, it’s unbelievable. We may find out on Wednesday that we will be playing on Friday. Things like these happen nowhere else”, Ketsbaia said.

Chairman Poullaides, meanwhile, conveyed his serious discontent with the level of officiating during the game with Ermis. “Things like these cannot be inflicted on us at our home ground, it’s unacceptable”, Poullaides said.

Apollon Limassol also dropped points, after their 1-1 draw with Doxa Katokopoias at Tsirio. Apollon struggled to create width and generally lacked creative input from the right after the early injury and withdrawal of key player and starting right back Joao Pedro.

Manager Sofronis Augousti remained focused on the team’s imminent European game against Saburtalo, while deflecting questions on both the squad status of Emilio Nsue as well as the severity of injuries sustained during the game against Doxa.

AEL managed to grab a late 2-1 victory over Olympiakos Nicosia, with Andreas Avraam grabbing the 85th minute goal for the Limassol club. “We were serious about our performance, especially in the first half, where we controlled the game”, Avraam said. “It’s early days but we believe in our team”, the AEL player added.

In times of crisis, two jobs are better than one