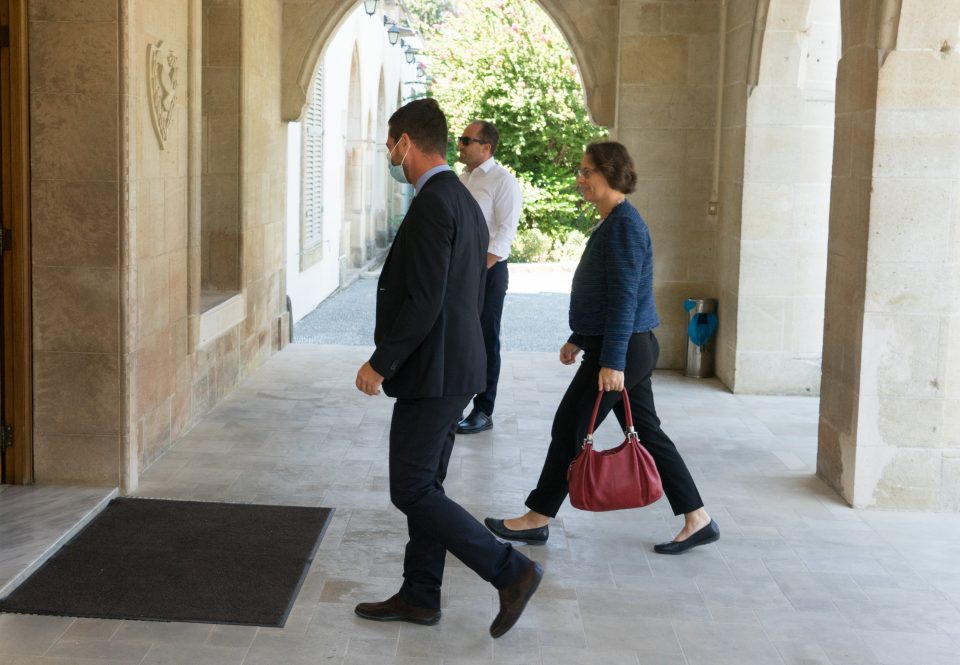 The EU should be more present in the Eastern Mediterranean region, the outgoing Ambassador of France Isabelle Dumont stressed on Tuesday.

In statements to the press after a farewell meeting with President Nicos Anastasiades, Dumont said that the Mediterranean should once again become an area of cooperation and stop being an area of tensions as it is today.

Dumont told reporters that France’s was working towards this goal but noted that more EU presence is needed in order to achieve it.

Her meeting came amid media reports that French and Greek fighter jets were at the Andreas Papandreou base in Paphos in preparation for an international military exercise to be held in the region in the next few days.

In her statements, Dumont also expressed Paris’s concern with Turkey’s behaviour in the region and said that what was needed now is to bring Cyprus back to a peaceful situation with its neighbours.

The situation in the Eastern Mediterranean especially, but also in the whole Mediterranean is not as it should be, she said, noting  that for most of its history, the region was a place of cooperation, commerce and political exchanges between all nations.

This is something that was lost and must be brought back, the Ambassador added, in particular in the Eastern Mediterranean, where it is now a place of  tensions, she continued.

The Ambassador went on to say that we should get out of this trend and this is what France is trying and wants to do, “but for that we need to have more EU”.

Dumont noted that if there is one entity in the world that is peaceful and wants to decrease tensions and increase economic and diplomatic endeavours is the EU, “so the EU should be more present in this region”.

Replying to questions, she said that France is concerned with the way Turkey is behaving now in the region. There are too many actors in the region and it is becoming too complicated, she said.

What we need to do, Dumont added, is to decrease tension. The Ambassador said that she did not wish to leave Cyprus naming and shaming any country.”What we need to do now is to have Cyprus back to a peaceful situation with its neighbours and this is what we are going to try to do”.

Asked about France’s presence in the Mediterranean, she said that “we are present, we have now constantly a frigate that is present”  and that this will most probably continue and thanked the Cypriot authorities for the facilities they offer.

The French presence in the Eastern Mediterranean is in the interest of everyone. The reason why France is present is precisely to avoid clashes, to respect international law and states’ right to use the seas, as well as to fight terrorism.

The Ambassador, who will be taking over the portfolio for the Commonwealth of Independent States (CIS) countries, the Balkans and Turkey at the Elysee, as advisor to the French President, said that she will try through her new post to help Cyprus and work towards decreasing the tension in the region.

Concluding, she said that her relation with the President of Cyprus, the Ministers and the civil society was excellent.

Cyprus has been divided since 1974, when Turkish troops invaded and occupied its northern third. Turkey has ignored numerous UN resolutions calling for the withdrawal of the Turkish troops and respect of the integrity and sovereignty of the Republic of Cyprus.

Ankara sent on several occasions its seismic research vessel ‘Barbaros’ to Cyprus’ Exclusive Economic Zone (EEZ), following the Republic of Cyprus’ decision, in 2011, to start exploratory offshore drilling. After May 2019, Turkey caused a stir by sending consecutively two drill ships, “Fatih” and “Yavuz”, to conduct unauthorised drilling activities of hydrocarbons in the Eastern Mediterranean, at times in areas licensed by Cyprus to international energy companies.

The European Council reaffirmed its full solidarity with Cyprus, regarding the respect of its sovereignty and sovereign rights in accordance with international law and in February 2020, placed two persons under restrictive measures, in relation to Turkey’s unauthorised drilling activities in the Eastern Mediterranean.

UEFA to allow fans to attend Super Cup in Budapest