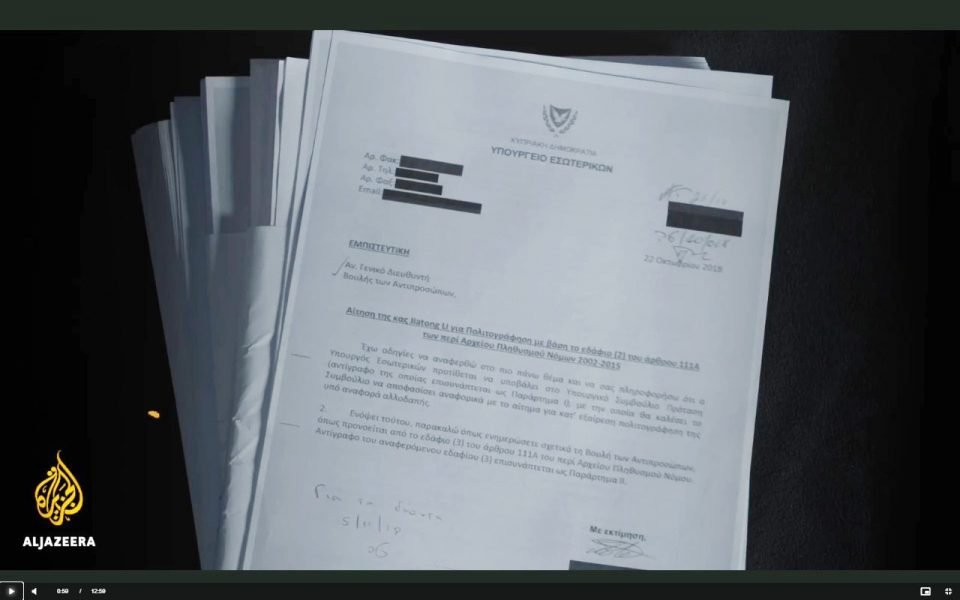 It is no accident that the ongoing smear campaign attacking the Cyprus Investment Programme is being carried on by Al Jazeera.

“These leaked documents might have appeared in a local Cyprus paper, and been integral to our country’s politics,” said one observer. “But the fact that they were leaked by Cypriot officials to a news source controlled by a foreign nation goes right to motive – a politically motivated attack.”

The photo shows that the “leaked” documents were indeed of provenance from the Cypriot parliament. Government sources say that an investigation is imminent.

That Al Jazeera is subject to political control is not in doubt. As early as February 2013, Der Spiegel reported that “a prominent correspondent who, until one year ago, used to report in Beirut for the network, says: “Al-Jazeera takes a clear position in every country from which it reports — not based on journalistic priorities, but rather on the interests of the Foreign Ministry of Qatar.”

Within the next few years, the news channel saw itself banned in Egypt, Jordan, Israel and Saudi Arabia among other countries. The New York Stock Exchange banished Al Jazeera correspondents in 2003.

What makes Al Jazeera so undesirable? That question was answered very clearly in a carefully documented report by a former member of the US Congress, ex-chair of the House Foreign Affairs Committee, lleana Ros-Lehtinen, published in July 2020:

“This report evaluates whether Al Jazeera is an “agent of a foreign principal” obligated to register with the Department of Justice (“DOJ” or “the Department”) pursuant to the Foreign Agents Registration Act (“FARA”), 22 U.S.C. § 611 et seq. Like Russia’s RT, China’s CGTN, and Turkey’s TRT media outlets, each of which the Department has required to register under FARA,1 Al Jazeera is owned, funded, directed, and controlled by the Government of Qatar, and it engages in political activities and disseminates information in the United States that advances the interests of  that foreign government. As of the date of this report, Al Jazeera has not registered under FARA.”

The report goes on to show the direct control by the Qatar government of the news channel: “Al Jazeera’s corporate structure includes the following entities: Qatar Media Corporation, Al Jazeera Media Network, and Al Jazeera International (USA) LLC. These entities are under the control of the Emir through the Council of Ministers. Qatar’s Council of Ministers acts as a supreme executive body for all of Qatar’s internal and external affairs.”

In 2014, Al Jazeera deployed $75 million to start a news channel in Turkey.

Three years later, without ever providing regular broadcasting, the Turkish project was closed down.

Why?  According to the former editor-in-chief of the Turkish channel, Gurkan Zengin, the project to launch a 24/7 news channel along with a digital platform became a threat to relations with Turkey.

“Al Jazeera has never explained internally why they changed their minds on establishing the channel after all this investment,” he said. “But it is plausible to think that they might have not wanted to continue a media investment that could put their relations with Ankara at odds,” Zengin explains.

To quote one analyst: “The ideological kinship between the two Sunni Muslim countries, which is based on passionate political support for Hamas and the Muslim Brotherhood (and a religious hatred of Israel), seems to have produced a bond.”

In 2014 Turkey and Qatar signed a strategic security agreement that gave Ankara a military base in the Gulf state. Turkey stationed some 3,000 ground troops at its Qatari base in addition to air and naval units, military trainers, and special operations forces.

In 2017, a coalition imposed a blockade on Qatar accusing it of supporting terrorism and fostering ties with Iran. Turkey immediately rushed to Qatar’s aid, sending cargo ships and hundreds of planes loaded with food and essential supplies to break the blockade, the analyst notes.

In 2018, the Qatari government pledged $15 billion in investment in Turkish banks and financial markets when Turkey’s national currency lost 40 per cent of its value against the basket of major currencies.

And, in May 2020, the Turkish Central Bank announced that it had tripled its currency swap agreement with Qatar, meaning it had secured much-needed foreign currency funding.

Turkey has a ‘golden visa’ programme that competes directly with that of Cyprus.

It grants residency, citizenship and a second passport to applicants investing either in real estate or a bank deposit.

In 2016, Turkey launched the citizenship acquisition by investment programme for foreign investors with a minimum property investment of $1 million. Last September, this was reduced to $250,000, and the period the property has to be held was cut down to three years after acquiring citizenship.

Not only is Turkey’s ‘golden visa’ scheme much less costly than that of Cyprus, but controls on access are much weaker – this is clear in the fact that Turkey has granted citizenship to more than 9,000 people through real estate investments since mid-2016, according to the head of a foreign real estate association.

Need we say more? The motivation of the sharply slanted Al Jazeera stories is quite evident.

The lost city has been found in the Sahara

Police have been investigating how citizenship documents were leaked