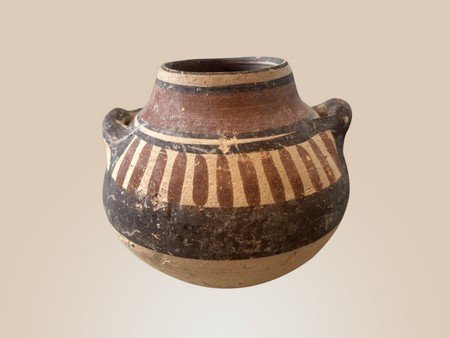 An ancient Cypriot vase dating from 750–600 BC is due to be repatriated to the island shortly, the antiquities department announced on Monday.

The vase was handed over to the Cyprus High Commissioner Andreas Kakouris in London on Friday by DC Ray Swan of the London Metropolitan Police.

The antiquity, a Bichrome ware miniature clay jar around 6cm high, was looted and illegally exported from Cyprus following the Turkish invasion of 1974, the department said.

It was handed over to the London Metropolitan Police by Costas Paraskevaides, the owner of ArtAncient, a London-based antiquities shop who came across the vase in his line of work.

“I identified it on the UK market, where it was offered, as being a stolen object and thanks to the kind help of Dr Solomidou-Ieronymidou, the Cyprus High Commission and the Metropolitan Police it was rightly returned to Cyprus,” Paraskevaides told the Cyprus Mail on Monday in an email.

The department of antiquities, the office for combating illegal possession and trafficking of antiquities, and the foreign ministry thanked Paraskevaides for handing over the antiquity and the London Metropolitan Police for its collaboration with the Cypriot authorities.

“The repatriation of the artefact will take place in the near future,” the department said.

“Every repatriation of a stolen and illegally exported cultural object is of utmost importance on many levels, since each and every such object represents a part of a country’s history and identity,” it added.